When did Baasha king of Israel come up against Asa king of Judah [apparent contradiction]?

According to my reading of the following passage from Chronicles, an Israelite king who had been dead for a decade (according to Kings) attacked Judah:

2 Chronicles 16:1 (NKJV)
1  In the thirty-sixth year of the reign of Asa, Baasha king of Israel came up against Judah and built Ramah, that he might let none go out or come in to Asa king of Judah.

1 Kings 16:8 (NKJV)
8  In the twenty-sixth year of Asa king of Judah, Elah the son of Baasha became king over Israel, and reigned two years in Tirzah.

There is no way possible that the 36th year was during the reign of Asa, since Baasha only reigned 24 yrs (1 Ki 15:33), and that reign had only begun when Asa was already sitting as king in Judah for about 4-5 years. In other words, "in the 36th year" refers to the time when the person was king since the kingdom divided, which is the preference of the writer(s) of Chronicles. On the other hand, the writer(s) of Kings preferred to reference the time since the king had actually begun reigning. Please see the graph for clarification, below, which is drawn to scale. So while Baasha and Asa were at odds from the get-go, the actual building up of the ramparts in Ramah did not get into full-swing until roughly the mid-points of their respective reigns. 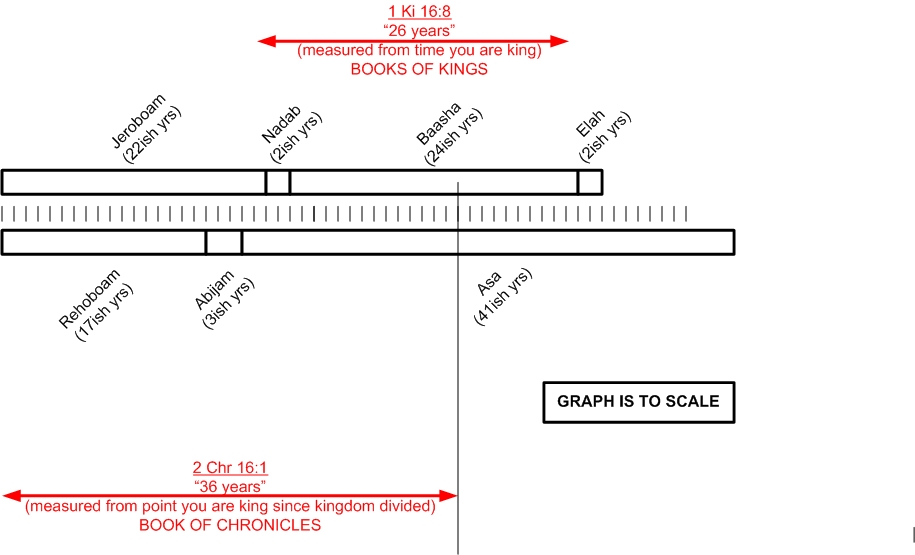 B.S.J. Isserlin gives a concise, if boring answer to this contradiction in The Israelites, page 66. He explains that Chronicles is not highly rated for reliability. Whenever there is a contradiction between Kings and Chronicles, with no extra-biblical source as a guide, then Kings should be preferred.

Maybe I’m not following your question correctly, but what I see in 2 Chr 16:1 is regarding the 36th year of the reign of Asa, while 1 Ki 16:8 is about the 26th year of his life. Otherwise, I see a lot of match in the words of your 2 Chr 16:1 with my 1 Ki 15:17’s “Baasha, king of Israel, attacked Judah and fortified Ramah to prevent communication with Asa.”

The answer to this question is simpler than changing the understanding of the event by aligning the date with the start of the overall kingdom. To change the comprehension of "in the 36th year of Asa's reign" to be "in the 36th year of the kingdom of Judah" is too broad a change and forces us to actually delete the Hebrew text. This explanation also denies the same usage of the text string found in other places ie. 2 Ch 15:10,19, 1 Ch 26:31, etc. The context of these statements on the monarch's reign is as the length relates to the king, not the kingdom.

If the overall kingdom length is to be used to explain the "36th year", this would place the event in the 16th year of Asa, which is one year following the national religious reforms. This immediately should make us question that probability. Why? Asa's turning to Ben-Hadad caused the prophetic rebuke from Hanani the Seer leading to Hanani's imprisonment. To suggest Asa was turning from the Lord for the next 25 years runs counter to the spirit of the text. These events must have taken place toward the end of Asa's reign, after his 35th year and prior to his diseased feet in this 39th year.

Furthermore, Asa's reign enjoyed 10 years of peace (which was from the Lord: 2 Ch 14:6-7) which began at the death of Baasha and the start of the Northern kingdom's civil war and ended in Asa's 35th year (2 Ch 15:19). This was during Omri's rise to power in the Northern Kingdom.

The modern bible translations are known in places to record details that are clearly wrong in the context. We should not fear these errors as they are inevitably due to transcription issues down through the ages and these errors do not compromise God's word as being inerrant and inspired.

It was the transcribing of the text that got it wrong, somewhere down the centuries, which makes this simply a human copyist error. Sceptics like to attack the faith based on transcription mistakes. But these can always be defended.

My research concludes that rendering the Northern Kingdom's king in 2 Chronicles 16:1-6 to be Omri, instead of Baasha, makes sense to the passage: doesn't contradict the chronology of the narrative and fits what we know about Omri. Omri was a builder (1 Kings 16:24) whereas Baasha was no builder. Add to this that Ben-Hadad was at war with Ahab, Omri's son. It therefore makes sense that the war commenced during Omri's time and flowed into that of Ahab. Omri came up to Judah to cut Asa off. Asa bought the alliance with Ben-Hadad who attacked Omri and continued to do so even during Ahab's time.

It could be a copyist error where instead of "16th year" it is copied as "36th year". The Hebrew letters for numbers only need slight smudges to make them look like another number.

Not the answer you're looking for? Browse other questions tagged contradiction 1-kings 2-chronicles kings or ask your own question.

13
Are "Uzziah" and "Azariah" the name of the same king?
3
Did Jehoshaphat take down the high places?
1
Is Ezekiel 28:22-24 an allusion to 1 kings 16:29-31?
2
How can we harmonize 2 Chronicles 14:1-4 and 15:8?
3
How can we understand the different dates in Haggai & Daniel about King Darius?
2
In Isaiah 7:3-7 why does the prophet Isaiah promise Judah that Ephraim & Syria will not attack & prevail against it?
5
How can we reconcile the supposed contradiction in the above texts in 2 Kings 15:30 & 2 Kings 17:1?
4
Why are different words for "month" used to when identifying Ziv as the second month, Bul as the eighth month, and Ethanim as the seventh month?
1
How long did Saul reign?