Dating Babylonian Destruction of Jerusalem w/ Only the Bible

I am interested to see if it's possible to obtain an approximate date of when Jerusalem was destroyed (secular sources say 587 BCE using cuneiform tablets, astronomy, etc.) with only the Bible and its internal dating (e.g. number of years of Kingly rulerships, when prophecies were given, age of people, etc.) I put the following chart together but still can't find a solution. 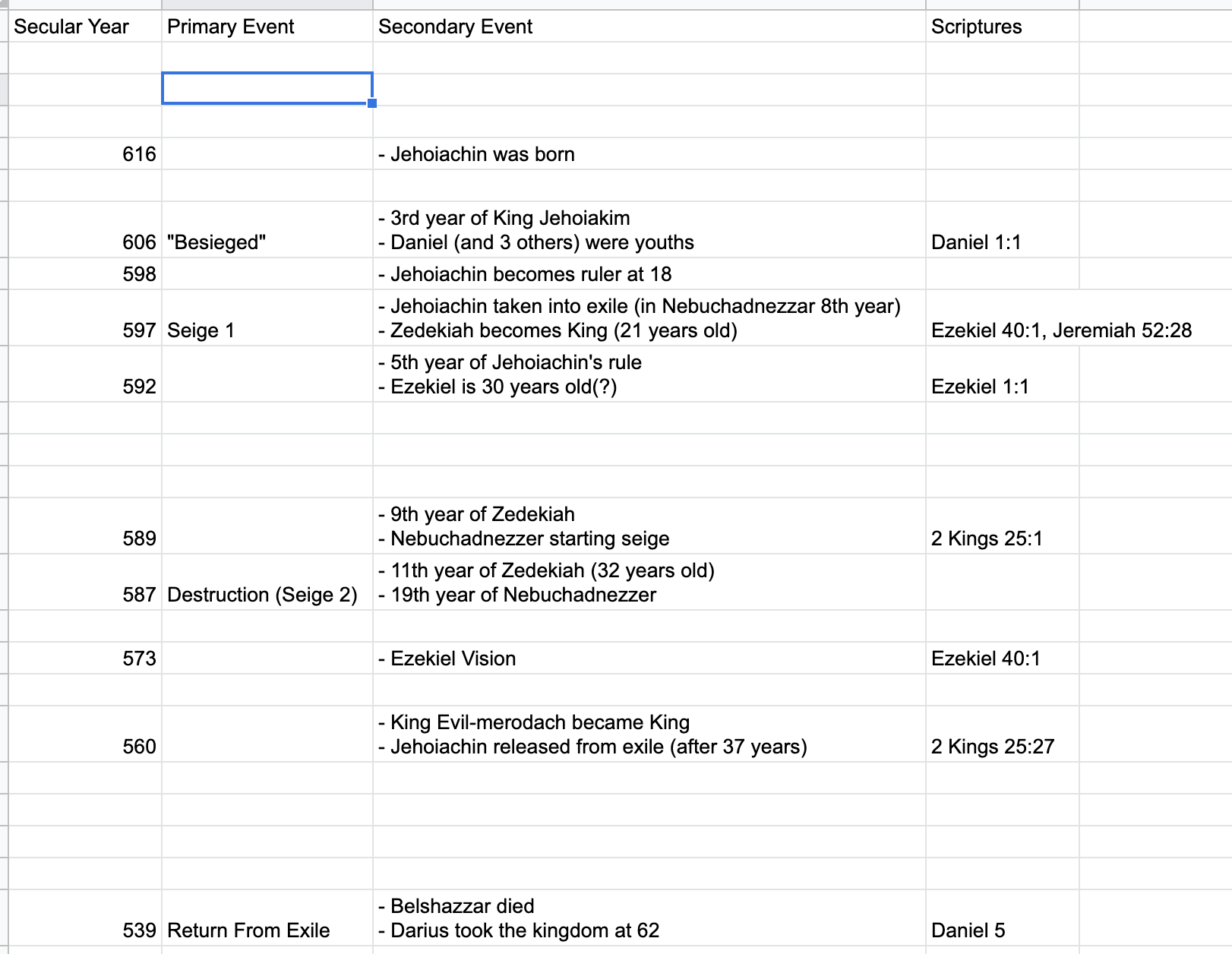 My thought was Daniel (who was a "youth" during the 3rd year of King Jehoiakim) and only lived after the return of exile could have been used, but we have no information about his age other than what I mentioned. I also thought Jehoiachin + Ezekiel could have provided some clues, but seems nothing to tie the loop.

chronology dating babylon
Share
Improve this question
asked May 28 '21 at 5:09

The short answer is no, because all Biblical dates that we can convert to modern calendars come via either astronomical observations that we can back-calculate OR by conversion to the *Julian calendar.

Perhaps what you're looking for, though, is whether the fall of Jerusalem can be dated by something other than Babylonian dates. Possibly...but in ancient chronology the more certain dates are used to ascertain the less-certain dates, so we would get a less accurate approximation by trying to date the fall of Jerusalem by back calculating from something later, like known events from the Persian Empire.

But even then, we'd still have to tie the Biblical chronology back somewhere to an external record of an astronomical event, or the Julian calendar. The Bible doesn't provide direct links to the Gregorian calendar, we always use an intermediary to do that (whether it's the Babylonians or the Persians or the Greeks etc, there's no getting around that).

Even if we developed a thoroughly internally consistent Biblical calendar using only Biblical texts, and could thereby determine how many years apart two Biblical events were, without astronomy or secular history we couldn't figure out how many years there are between those events and today.

*We could also mention the Greek Olympiad dates or the chronology from Josephus, but these are known by conversion through the Julian calendar as well.

Not the answer you're looking for? Browse other questions tagged chronology dating babylon or ask your own question.

20
Is Paul's visit to Jerusalem detailed in Galatians 2 the Jerusalem Council?
6
Is there a published version of the Bible, where the text is ordered chronologically in the order it was written?
9
How long were the Children of Israel enslaved in Egypt, according to the Bible?
3
Does Psalm 137 refer to the Babylonian captivity when Ezekiel was alive?
1
Nebuchadnezzar acting like a beast.today. Babylonians only considered winter and summer and therefore it was 3.5 years. The other source said 7 years
1
Was the gift of the Holy Spirit promised only for the first-century Church, according to Acts 2:38-39?
2
Why did Daniel interpret the 70 years of Babylonian servitude to be the same length of desolation?