What is the significance of the Word tabernacle among us?

And the Word became flesh, and did tabernacle among us, and we beheld his glory, glory as of an only begotten of a father, full of grace and truth.

What is the significance of the Word tabernacle among us? What is John trying to depict? Is this related to the tabernacle at Moses' time? How does it relate to flesh?

What is the significance of the Word tabernacle among us? The word tabernacle is a translation of the Hebrew ‘mishkan’, which means “dwelling-place.” The KJV translates John 1:14 thus:

And the Word was made flesh, and dwelt among us, (and we beheld his glory, the glory as of the only begotten of the Father,) full of grace and truth.

At the incarnation, the Word took on human flesh in order to dwell among us.

Is this related to the tabernacle at Moses’ time? During the wilderness years, the tabernacle of Moses provided a place where the people could properly worship God. Within the tabernacle, in the Holy of Holies which contained the Ark of the Covenant, dwelt the presence of God. God dwelt among his people.

How does it relate to flesh? It is significant that when Jesus gave up his spirit, the heavy curtain of the temple, that barrier between the Holy Place and Most Holy Place, was supernaturally torn in two (see Matthew 27:51; Mark 15:38; and Luke 23:45). The torn curtain symbolized that the way to God was now open to all through the sacrificial death of Christ:

Therefore, brothers and sisters, since we have confidence to enter the Most Holy Place by the blood of Jesus, by a new and living way opened for us through the curtain, that is, his body, and since we have a great priest over the house of God, let us draw near to God with a sincere heart and with the full assurance that faith brings.” (Hebrews 10:19–22a)

What is John trying to depict? We know that the Word became flesh – was miraculously conceived by the Virgin Mary through the Holy Spirit, and was born – Immanuel, God with us. Here is an extract from an article that presents an interesting take on why John used the word ‘tabernacle’:

The word John chose to speak of Jesus “dwelling” among us is the word tabernacle, which simply means to “dwell in a tent.” Some believe it is very likely that John intentionally used this word to associate the first coming of Christ with the Feast of Tabernacles. Christ came in the flesh to dwell among us for a temporary time when He was born in the manger, and He is coming again to dwell among us as Lord of Lords. While it cannot be established with certainty that Jesus was born during the Feast of Tabernacles, some believe there is a strong possibility the Feast of Tabernacles not only looks forward to His second coming but also reflects back on His first coming. Source: https://www.gotquestions.org/Feast-of-Tabernacles.html

I honestly don’t know if that is a valid explanation, but it certainly gave me pause for thought! Interesting questions.

See In John 1:14 what does ἐσκήνωσεν mean?

Usually commentators point out that σκηνόω has the idea of dwelling in a tent, and σκηνη is used in the New Testament and LXX for the tabernacle. However, σκηνόω is very similar to the Hebrew word שָׁכַן, (šakan, imperfect waw consecutive וַיִּשְׁכֹּ֤ן, wayiškon) which also means dwell and is also used for Mount Sinai.

The glory of the LORD dwelt on Mount Sinai, and the cloud covered it six days. And on the seventh day he called to Moses out of the midst of the cloud. (Exodus 24:16, ESV)

The context fits John making a parallel to Mount Sinai.

For the law was given through Moses; grace and truth came through Jesus Christ. (John 1:17, ESV)

Here's a chart of the roots of the word in the LXX translating שָׁכַן. Note: most of these roots had the preposition κατα prefixed. The root of ἐσκήνωσεν is predominant. 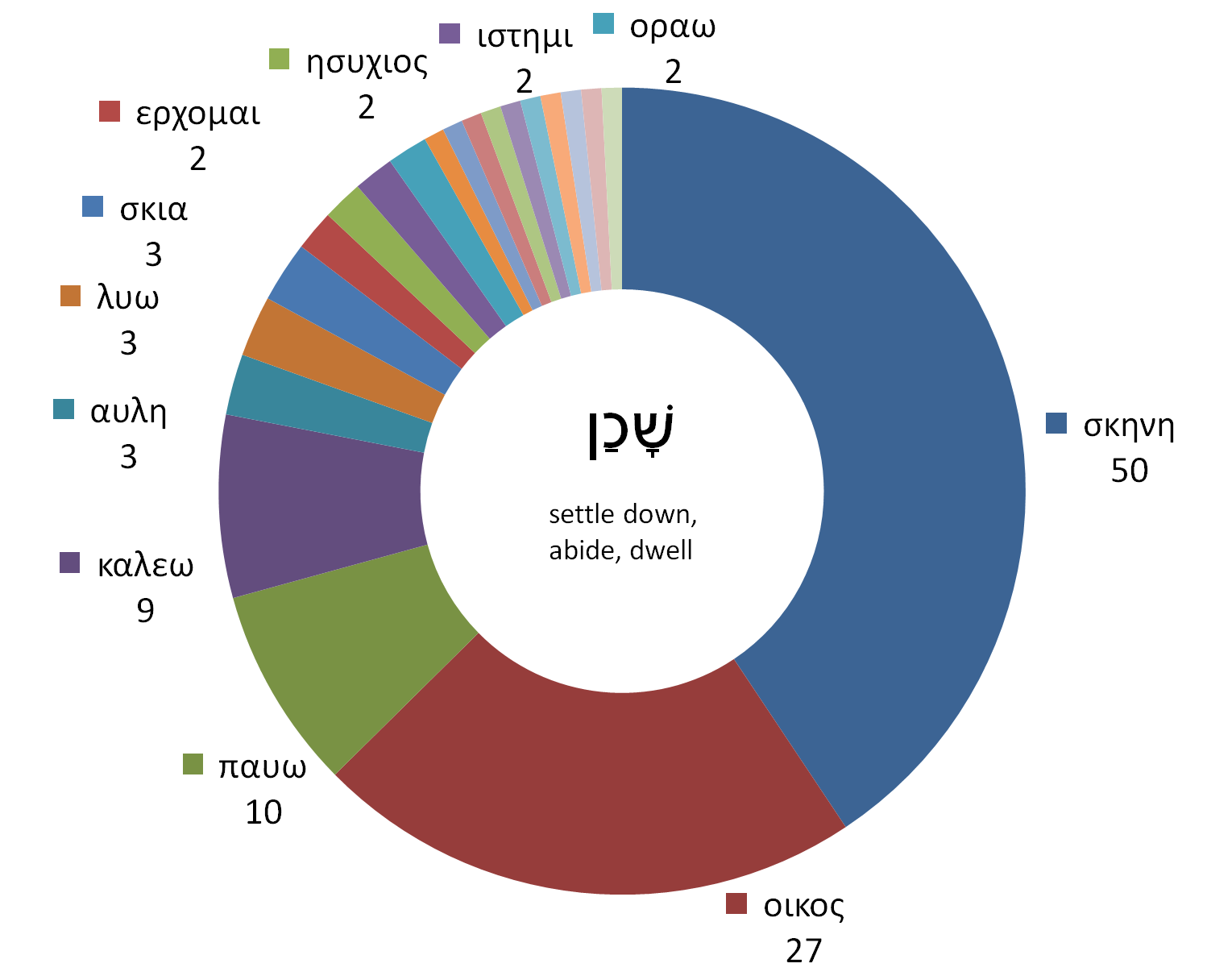 Translations with other than dwell.

So the Word became human and made his home among us. (LT)

The Word became a human and lived among us. (NCV)

And the Word (Christ) became flesh (human, incarnate) and tabernacled (fixed His tent of flesh, lived awhile) among us; (Amp.)

The Word became flesh and tabernacled among us. (ISV)

And the Word became flesh, and did tabernacle among us (YLT)

Many more had "lived."