Why were the innocent destroyed together with the wicked in Sodom and Gomorrah in Genesis 19:24?

24 Then the Lord rained down burning sulfur on Sodom and Gomorrah—from the Lord out of the heavens. 25 Thus he overthrew those cities and the entire plain, destroying all those living in the cities—and also the vegetation in the land. 26 But Lot’s wife looked back, and she became a pillar of salt.

Moses had actually told the Israelites in the book of Deuteronomy that children are innocent because they do not know good from bad, so they were never destroyed during the rebellion of Israel

39 And the little ones that you said would be taken captive, your children who do not yet know good from bad—they will enter the land. I will give it to them and they will take possession of it. 40 But as for you, turn around and set out toward the desert along the route to the Red Sea.[a]”

Why were children of Sodom and Gomorrah destroyed along with the wicked?

genesis deuteronomy moses
Share
Improve this question
edited May 3 at 14:57

Why were the innocent destroyed together with the wicked in Sodom and Gomorrah in Genesis 19:24?

Here is one possible answer, Isaiah 57:1

If you read from Genesis 18:23-32, Abraham was asking the exact question :) And God basically said He wouldn't harm the righteous. 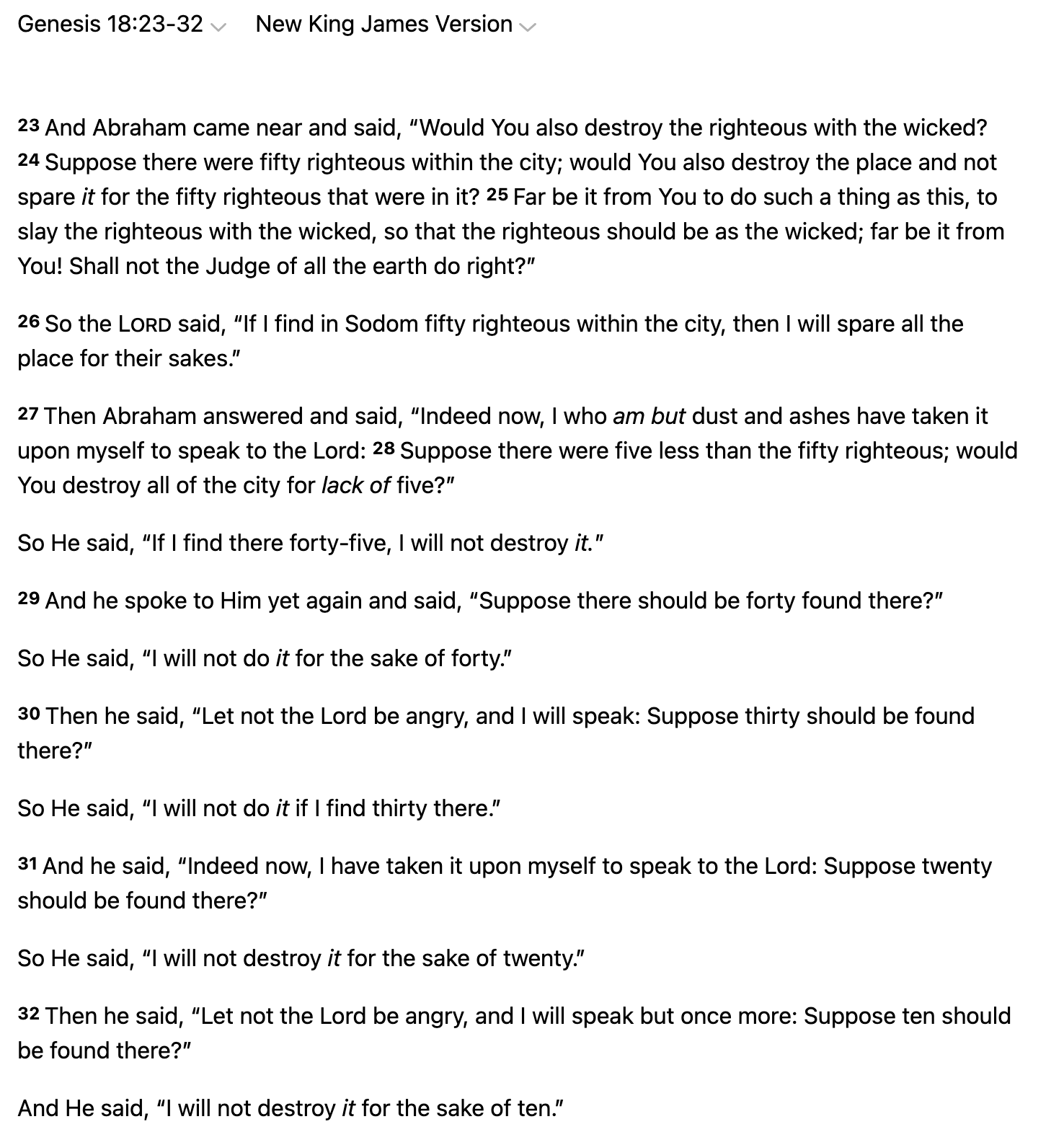 In Genesis 19:12-16, an opportunity was offered for Lot to take people out of Sodom before the judgment. Verse 14 the sons-in-law didn't believe in him. Then Lot was led out of the city together with his family. Tragically his wife died due to disobedience.

Although I did not find explicit information about children, from reading chapters 18 and 19 it is very convincing that God would never unjustly punish any righteous soul in Sodom.

Hope that answers the question and pray that God gives us the wisdom to understand His word and draw our relationship with Him closer.

I agree with previous responses regarding that NONE are righteous on their own, only by trust in God's promises (pre-Christ) and in Jesus Himself.

The specific context of Deuteronomy 1 is really important here, I think: the sin preventing the Israelites from entering the Promised Land here is that they gave in to the fear of the Canaanites and some of them made plans to turn back toward Egypt, while others went in to fight the Amorites against God's command.

This was direct rejection of God's gift and complete mistrust in God's goodness, providence, and power to deliver them into the land he had promised to Abraham. In this sense, the children not knowing good from bad doesn't make them innocent, but rather that God is specifying that He would still bring the Israelites into the Canaan - only not the generation that had refused to enter it.

In other words, the children were not considered to be culpably involved in this particular sin - the rejection of entering the Promised Land - but Got was still dedicated to fulfilling His promise to his people. Therefore, the consequences of that rejection would only be carried out on the current generation, while the promise would be granted to the next. This doesn't mean that the children were innocent per se, but rather that they hadn't disqualified themselves from entering the Promised Land.

In the case of Sodom and Gomorah, the rampant wickedness and sin of the cities had penetrated all levels of the society. As in the exchange of Genesis 18:23-32, God did not find a single person in the cities to be righteous. Indeed, no human is truly righteous on our own.

The destruction of the cities was a consequence of deep sin that applied to everyone, and a display of God's hatred toward sin, while denial of entering the Promised Land was a logical consequence that applied only to the generation of Israel that had refused to enter it on God's terms (not including Caleb and Joshua, who had acted and spoke in faith upon spying out the land).

So I think Soddom and Gomorah's destruction was not unfair.

I think this turns in part on your understanding of Deut. 1:39. Moses did not say that the children would enter in because they don't know good from bad. Rather, he defines which children he is referring to: the ones who are so young, they don't know good from bad. This looks to be a bit of poetic hyperbole, since the actual children in question included every one under 20. (Numbers 14:29)

A more thorough answer would probably be a study of all the times in Scripture that God lumps whole families together, based on the actions and attitudes of the male head of household. So the angels go to Sodom looking for righteous men (representing their entire families) in the town center, rather than going house to house counting babies in cradles.

Paul and other emphasize this point again and again

The wholesale destruction of the two cities of the plain is not unique. God did the same thing at the flood because:

In the case of Sodom, there was similar condition as exemplified by the pack-rape mob and homosexuality at Lot's door. [A modern example of this occurred under ISIS where even children were taught evil things and thoroughly brutalized.]

In His divine wisdom, God decided that the only solution was destruction of Sodom - even the three people saved did not turn out well!

Not the answer you're looking for? Browse other questions tagged genesis deuteronomy moses or ask your own question.

9
Whose idea was it to send the spies to scout the land of Israel?
6
Natural disaster at Sodom and Gomorrah in Genesis 19:24?
5
Is there special meaning to the punishment of being turned into a pillar of salt?
6
Angel “marriages”, rebellious angels, and Genesis-Jude intertextual connections
2
In Genesis 13 and 18 was the grievous sin in Sodom and Gomorrah homosexuality?
0
Is “eternal fire” in Jude 7 an allusion to 4 Maccabees 9:9?
2
Could Moses's instructions have indirectly lead to the bad report of the ten spies in Numbers 13:17-20?
5
Who were complaining against Sodom and Gomorrah?
1
What is the meaning of those people not knowing good from bad in Deuteronomy 1:39?
1
Why was Abraham not punished for looking at Sodom whilst it was burning in Genesis 19:27?