This question looks at 5 contexts which refer to hell, how the word is used, and what it means.

For thou wilt not leave my soul in hell; neither wilt thou suffer thine Holy One to see corruption. Psalm 16:10

22 And it came to pass, that the beggar died, and was carried by the angels into Abraham’s bosom: the rich man also died, and was buried;

By which also he went and preached unto the spirits in prison; (1 Peter 3:19)

The Greek word here is a form of φυλακή (“phulaké”).

12 And I saw the dead, small and great, stand before God; and the books were opened: and another book was opened, which is the book of life: and the dead were judged out of those things which were written in the books, according to their works.

14 And death and hell were cast into the lake of fire. This is the second death.

15 And whosoever was not found written in the book of life was cast into the lake of fire. (Revelation 20:12-15)

The Greek word here for hell is again a form of ᾍδης (“hades”); the lake of fire is λίμνην τοῦ πυρός (“limnēn tou pyros”).

But the children of the kingdom shall be cast out into outer darkness: there shall be weeping and gnashing of teeth. (Matthew 8:12)

Related questions here, here, and here, each of which is somewhat more narrow than what this question considers

We could also add a 6th example "Gehenna" to the list; it was discussed here and here

What are Sheol / Hades / Prison / Lake of Fire / Outer Darkness?

Allow me to restate the passages you have provided using the NASB-95 translation. I believe what’s crucial to recognize throughout this discussion is context.

I. My rendering of Psalm 16 reads:

Psalm 16:10: “For You will not abandon my soul to Sheol; Nor will You allow Your Holy One to undergo decay.”

II. The passages from Luke 16 read:

Luke 16:22-23: “Now the poor man died and was carried away by the angels to Abraham’s bosom; and the rich man also died and was buried. In Hades he lifted up his eyes, being in torment, and saw Abraham far away and Lazarus in his bosom.”

My version does not read “Hell” –- nor should it. This must be understood as “Hades,” which will make sense in a few moments.

III. The reference in 1 Peter 3 from the NASB reads:

1 Peter 3:19-20: “[In which also Christ] went and made proclamation to the spirits now in prison, who once were disobedient, when the patience of God kept waiting in the days of Noah, during the construction of the ark, in which a few, that is, eight persons, were brought safely through the water.”

In the above passages, we must understand what is being said in context. There is no way we can decipher the passages if we do not do this. When we do (momentarily), we will see that 1 Peter 3 cannot be referring to Hell.

IV. The passages cited from Revelation are highly symbolic:

Revelation 20:12-14: “And I saw the dead, the great and the small, standing before the throne, and books were opened; and another book was opened, which is the book of life; and the dead were judged from the things which were written in the books, according to their deeds.

It would take another post to decipher much of what is written here. Suffice it to say that the "books to be opened" are the record of our lives, our consciences; we are either written in the Book of Life at death or we are not; notice that the (spiritually) dead are judged, not the saints; death and Hades (not eternal) is to be - future tense - thrown into Hell (the Lake of Fire).

Matthew 8:12: “[But] the sons of the kingdom will be cast out into the outer darkness; in that place there will be weeping and gnashing of teeth.”

1. Do sheol, hades, inferos, phulaké, limnēn tou pyros, and skotos to exōteron refer to the same thing? If not, what is their relationship?

“hades”, “phulaké”: First, Hades is understood the temporary abode of the lost as we see in Lk. 16:19ff. This will be reinforced as we continue, but note the rich man has yet to be judged. He is languishing in torment prior to his final, eternal destination: Hell. He is hardly alone.

“sheol,” “gehenna”: While you didn’t mention the word “gehenna,” as I recall both of these words are understood by many to refer to “Hell.” This is the final abode of all the wicked following judgment, not before.

“limnēn tou pyros”: I would suggest that the Lake of Fire is the same as Hell. In Matthew 25 we read:

Matthew 25:41: “[Then the King] will also say to those on His left, ‘Depart from Me, accursed ones, into the eternal fire (“sheol,” “gehenna”) which has been prepared for the devil and his angels.”

This is referring to an eternal fire, not the temporary prison we read about in both Luke 16, 1 Peter 3, and elsewhere.

“skotos to exōteron”: I’m unfamiliar with the term “inferos,” but “skotos to exōteron” could be referring to either place of doom since, irrespective of whether one is consigned to Hades or Hell, they are both very much “outer darkness.” I propose the only distinction is that Hades is temporal while Hell is eternal.

2a. Is what is being described “A place” (from 1 Peter 3 he went there; spirits were in prison)

From the passage in 1 Peter 3, we should understand that verses 19 and 20 are relating a story about those who are now in prison (“phulaké”) at the time Peter wrote his Letter. There is a timeless truth about the Spirit of Christ to be recognized in these verses if we can spot it. Allow me to paraphrase:

1 Peter 3:19-20: “[In which Christ] went [in the Spirit] and made proclamation [through Noah: 1 Peter 1:11] to the spirits [people of the pre-Flood era that are] now [at the time of Peter’s writing, finally] in prison, who once were disobedient [before the Flood], when the patience of God [through Noah] kept waiting in the days of Noah [Noah preached for 100 years], during the construction of the ark, in which a few, that is, eight persons, were brought safely through the water.”

This entire narrative is speaking of the spirits of those who were once human, now in the prison of Hades as Peter writes. Hades must be temporal because it now exists (1 Pet. 3) – unlike Hell.

2b. Is it a state of being (from Luke 16 the rich man was in torments)

Hardly. The figure of Abraham is most likely God. The Jews considered Abraham their father (cf. Jn. 8). In the N/T, God is our Father. Nonetheless, the narrative contains parabolic elements; note that the rich man possesses certain spiritual/physical? characteristics that demonstrate at least an awareness of sight, touch, and hearing. No, the rich man is in the temporal realm of Hades – a prison where those from 1 Peter 3 are also languishing.

2c. I am afraid I can discern nothing else.

I propose that the correct interpretation here is Hades. That is because no one will be “given up” from Hell, it is permanent.

3b. Do some or all of those who leave return?

Hell is a state of permanence. It is unclear to what you are referring, but no one will ever “return” either from Hades or Hell. Each one of us has been given a lifetime to decide our fate; we are alone in doing so. In Hebrews, we read:

Hebrews 9:27: “And inasmuch as it is appointed for men to die once and after this comes judgment…”

There is no turning back from these horrific destinations. I have inserted a graphic that helps me visualize Hades (vs. paradise). I have omitted Hell since I think we can get that picture based on this one: 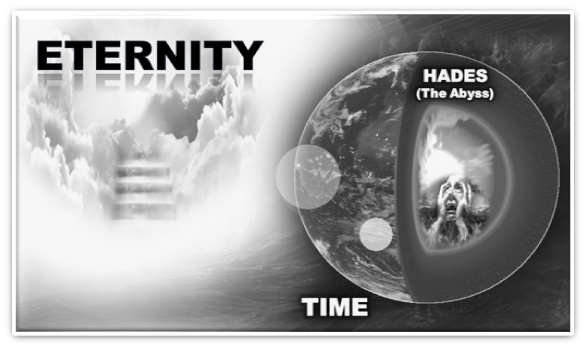 I hope I have not overlooked some of your questions: I could have. I did my best to parse all of it to provide what I see as reasonable explanations to each of your points based on the evidence and context.

According to the Jewish sages, Hell in the primary, purifying of the soul stage, is 6 months of heat, and 6 months of cold. I don't remember the source, but I remember learning it.

Not the answer you're looking for? Browse other questions tagged greek hebrew word-study soteriology or ask your own question.

24
In Revelation 20:14, what is meant by "Death and Hades were thrown into the lake of fire"?
10
Why is Hadēs translated as "hell"?
11
Does the Hebrew word Qe'ver refer to Hell or to "the place of the dead" or "the grave"?
10
What is the outer darkness referred to in Matthew?
4
What did Jesus mean by 'the gates of hell'?
4
What is the "fiery Gehenna" to which Jesus referred?
4
Is Peter's use of Tartarus adoptive of Hellenistic language or ideas?
2
Gehenna (γέεννα) vs Hades (ᾅδης)
-4
Is the Valley of Hinnom adequately translated as hell?

4
What do pronouns "their" in Mark 9:43-48 refer to?
3
Was Isaiah loved 'from the pit', Isaiah 38:17?
11
Does the Hebrew word Qe'ver refer to Hell or to "the place of the dead" or "the grave"?
3
In 1 Corinthians 15:26, what is the significance of καταργεῖται ("abolish") being a present indicative instead of a future?
4
Isaiah 5:14 - Sheol/Hell personified as a woman?
7
"... where their worm does not die and the fire is not quenched" - Is Jesus' description of Hell (Gehenna) literal or figurative?
4
What is meant by damnation? Are there different types of damnation? When does this happen?
4
Psalm 16:10: hell vs Sheol vs realm of the dead
4
Is it a sin to be afraid?