Where was the water to baptize the Ethiopian eunuch?

The book of Acts recounts the baptism of the Ethiopian eunuch following a revival in Samaria with Philip the evangelist.

Now an angel of the Lord said to Philip, “Go south to the road—the desert road—that goes down from Jerusalem to Gaza.” (Acts 8:26)

So, the encounter is located on a desert road between Jerusalem and Gaza. The narrative suggests that it happened somewhat further along the road than Jerusalem because Philip met a traveling chariot and ran with it before being invited up. Then their conversation included the Eunuch’s question and Philip’s explanation. It would not have been brief because the conversation began with Isaiah’s prophecy and ended with Jesus being the ‘Son of God.’ So, we can fairly assume a pool of water was found some miles along the desert road.

As they traveled along the road, they came to some water and the eunuch said, “Look, here is water. What can stand in the way of my being baptized?” And he gave orders to stop the chariot. Then both Philip and the eunuch went down into the water and Philip baptized him. When they came up out of the water … (Acts 8:36-39)

So, my question is, “Where might it have been?” Is there a good water spring or wadi between Jerusalem and Gaza?

The problem with using Google Maps is that it shows the modern walking route, which is affected by recent politics. The current route avoids two crossings of the West Bank border. (That border is geographically obvious from the different colour of the land, likely due to different agriculture and conservation practices.) 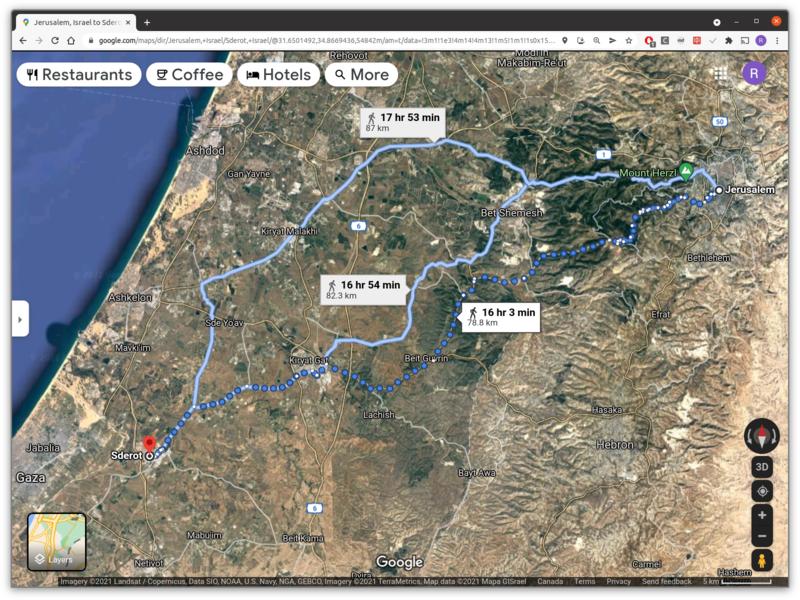 The modern route starts out to the west and avoids desert, but the scripture says "Go south to the road — the desert road".

If we force the route to go south, then taking the desert road would lead one south and then south-west through several areas that are green and forested, and so be more likely candidates for the baptism site: 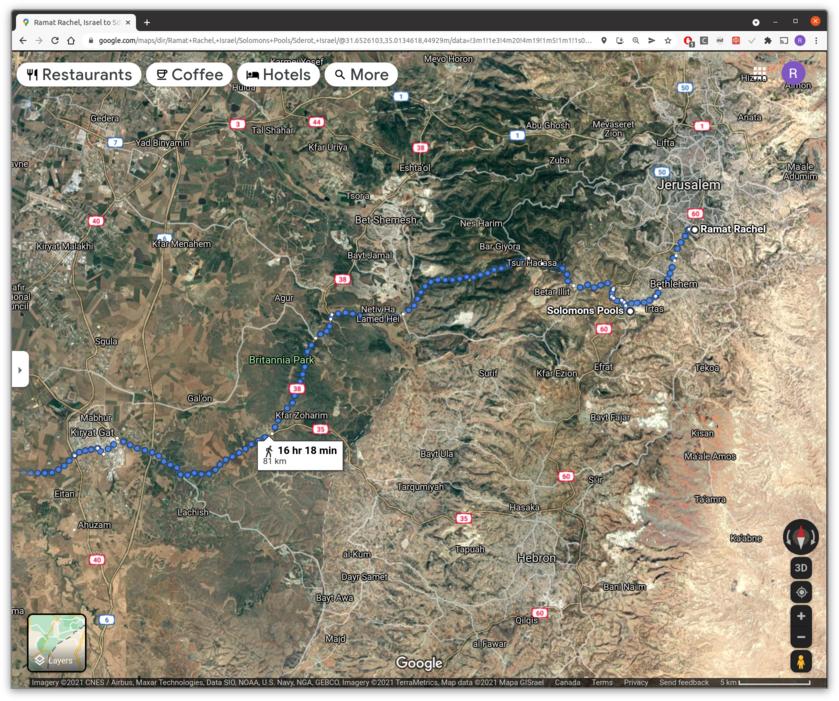 The biggest unknown is that we don't know in detail how much the geography has changed since two thousand years ago. But it's not unreasonable to assume that low-lying areas that are green today would have been just as wet, or even more so, back then.

Interestingly though, that route also passes through Solomon's Pools - Wikipedia, which are at least a century older than the date we are concerned with, and would be very good candidates for the baptism site: 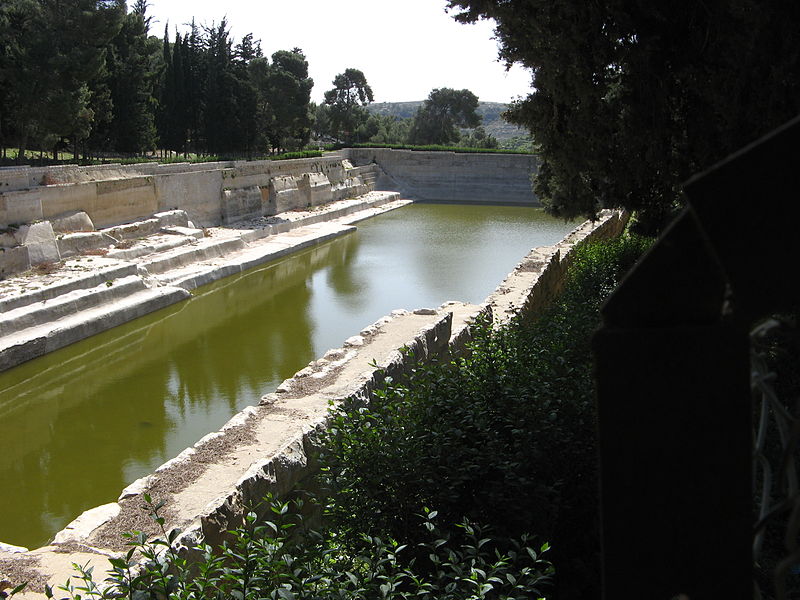 The region between Jerusalem and Gaza is dry but not a full desert where you need an oasis to find water. You needn't travel there. Just have a look on Google Earth and you will see several streams. You cannot identify this place.

"When we were at Tell-el-Hasy, and saw the water standing along the bottom of the adjacent wady, we could not but remark the coincidence of several circumstances with the account of the eunuch's baptism. This water is on the most direct road from Belt Jibrin (Eleutheroplis) to Gaza, on the most southern road from Jerusalem, and in the midst of a country now 'desert,' i.e. without villages or fixed habitations. There is no other similar water on this road" (Robinson,' Bibl. Res.,' vol. it. p. 345).

A certain water; this water is supposed to be a fountain in a town called Bethsora, or a river called Eleutherus, which in that road must needs be passed over; it being otherwise very dry, and water very scarce there.

Another possibility is that it was a miracle. God showed Hagar and Ismael water in Genesis 21:

19Then God opened her eyes and she saw a well of water. So she went and filled the skin with water and gave the boy a drink.

Not the answer you're looking for? Browse other questions tagged baptism or ask your own question.

6
What was the historical and cultural context of baptism in the time of Christ?
4
Was the baptism by Jesus' disciples representing repentance? John 3:26
0
John 1:31 Why did John think that baptism with water was a condition for Christ to be revealed to Israel?
4
Paul was not sent to baptize?
3
Why are forms of the word 'βάπτισμα' transliterated as 'baptism, baptize,' instead of being translated?
1
In Matthew 3:6 was Jesus' interview with John the baptizer modeled after rabbinic protocols for proselyte baptism?
1
How did John the Baptist claim Jesus was the Lamb of God before being confirmed with the Holy Spirit descending on him