Were the two disciples heading to Emmaus heading back to Galilee?

After the Resurrection, Jesus tells the Apostles to meet Him in Galilee:

Then go quickly and tell his disciples that he has risen from the dead, and behold, he is going before you to Galilee; there you will see him. Lo, I have told you.” (Mt 28:7)

But go, tell his disciples and Peter that he is going before you to Galilee; there you will see him, as he told you.” (Mk 16:7)

However, we see that instead, the Apostles stayed in the locked upper room:

And they rose that same hour and returned to Jerusalem; and they found the eleven gathered together and those who were with them, (Lk 24:33)

It seems to me that the Apostles were waiting in Jerusalem (likely mourning Jesus' death) after the Passover; however, we see that two of Jesus' followers instead went to Emmaus. As we can see in this map, Emmaus is to the Northwest of Jerusalem, while Galilee is to the north: 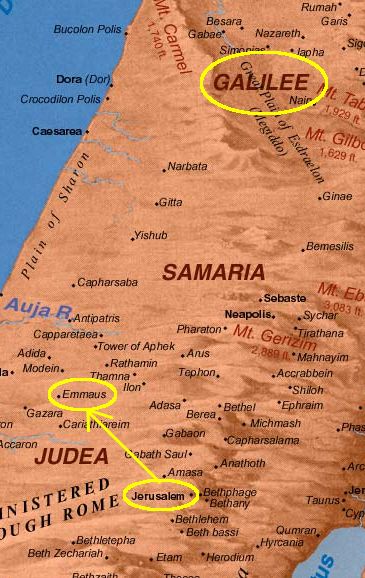 What was these two's purpose in heading to Emmaus? Were they trying to carry out Jesus' command, or were they simply returning home?

For example, were these two Disciples heading towards the Mediterranean Sea to sail up to Galilee, was there a road heading through Emmaus that lead to Galilee, etc.?

A few verses earlier we are told of the group:

And their words seemed to them as idle tales, and they believed them not. (Luke 24:11)

Not the route you'd take to Galilee

The most direct route to Galilee would be through Samaria, but many Jews avoided the Samaritans and didn't go this way (e.g. see John 4:9); the next best route would be down to Jericho, then north along the Jordan, then northwest along the Jezreel Valley (see a discussion here from Kelly Ogden's experience walking both routes).

Heading to Emmaus was almost completely the opposite direction of the preferred, Jericho route.

We can't be 100% sure but it seems unlikely they were headed to Galilee. As noted in the OP, they may well have been traveling home after the feast; it was after all the first non-Sabbath after the Passover meal.

(By Passover meal I refer to what Josephus discussed in Wars 6.9.3, the lamb slain on the 14th and eaten on the 15th of Nisan)

Not the answer you're looking for? Browse other questions tagged luke geography or ask your own question.

1
Didn't Cleopas see Jesus’ nail marks?
9
Did Jesus call his disciples before or after going to the Capernaum synagogue?
8
Was the city of Emmaus along a populated route from Jerusalem?
3
Did Christ tell the disciples to stay in Jerusalem before or after they saw Him in Galilee after His resurrection?
1
In Luke 24:13, two apostles are mentioned. Who is the second?
1
When did disciples go to Galilee to meet Jesus?
2
Did Jesus first appear to the 11 disciples in Jerusalem or Galilee?
7
Why did the disciples have so much trouble recognizing Jesus after his resurrection?
2
Luke 24 - Simon as the second disciple?