What do the words kenoo (empty) and harpagmos (seize) mean Philippians 2:5-7? [duplicate]

American Standard Version of Philippians 2:5-7, Have this mind in you, which was also in Christ Jesus who, existing in the form of God, counted not the being on an equality with God a thing to be grasped,but emptied himself, taking the form of a servant, being made in the likeness of men;

What do the verses tell about Jesus' mind? What did Paul intended to tell the believers when he said these words?

What reason would it make to talk of robbery to acquire equality?

Did Paul said that Jesus entertained the thought of seizing equality in these verses?

From the standpoint of our own application, this is the meaning:

So if there is any encouragement in Christ, any comfort from love, any participation in the Spirit, any affection and sympathy, 2 complete my joy by being of the same mind, having the same love, being in full accord and of one mind. 3 Do nothing from selfish ambition or conceit, but in humility count others more significant than yourselves. 4 Let each of you look not only to his own interests, but also to the interests of others. (Philip. 2:1–4, ESV)

The phrase ἑαυτὸν ἐκένωσεν has been used to try to explain how Jesus could be both God and man (a stumbling block to Jews). Some Trinitarians take κενόω here to mean that Jesus completely emptied himself of the attributes of God to become a man (the kenotic theory). Traditionally κενόω here has been taken to refer to Christ's self humiliation.

Here are the senses of how κενόω is used in the New Testament (from Logos Bible Software). 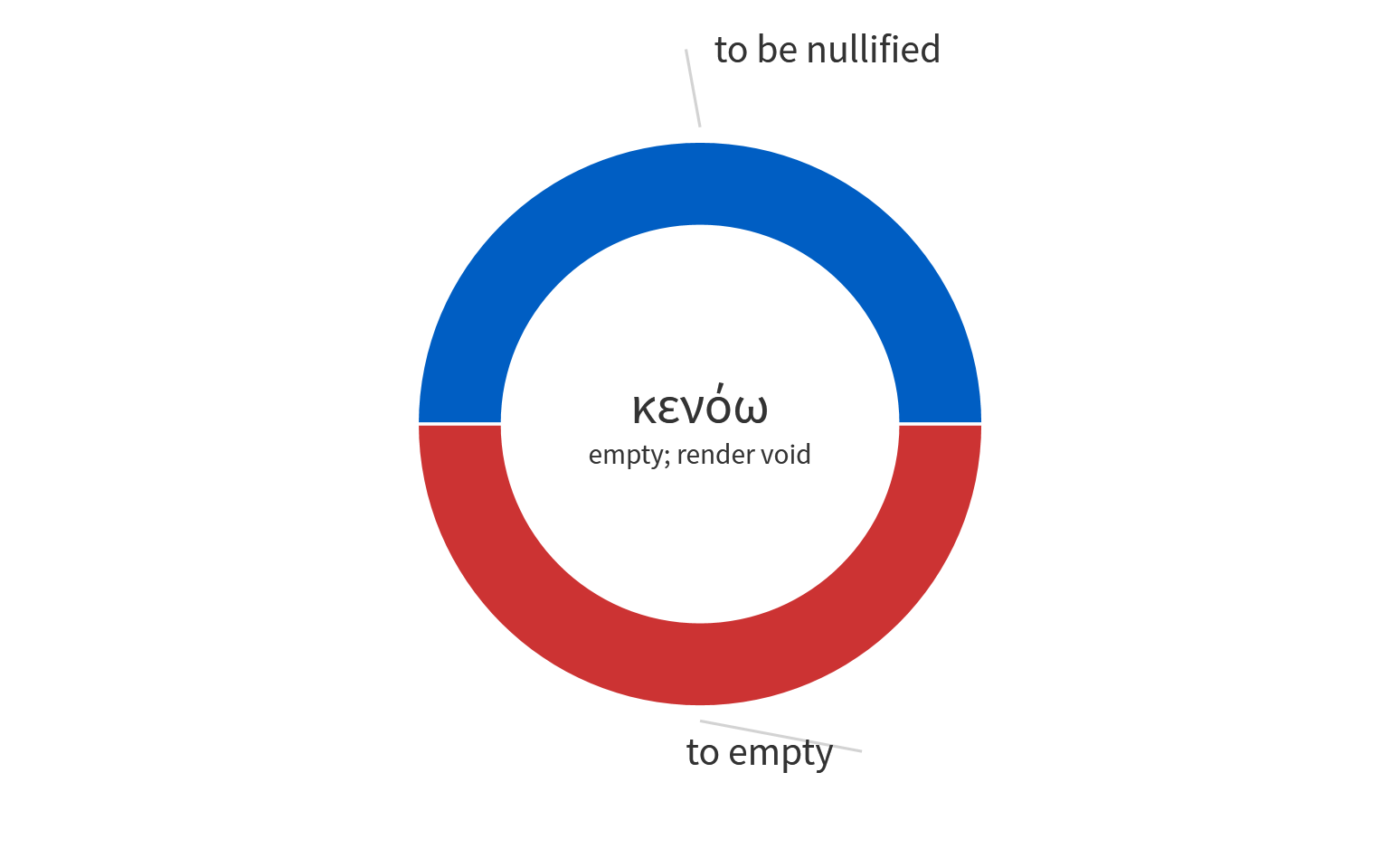 Verses like the following are use to dispute the kenotic theory.

12 If I have told you earthly things and you do not believe, how can you believe if I tell you heavenly things? 13 No one has ascended into heaven except he who descended from heaven, the Son of Man. (John 3:12–13, ESV)

Many Trinitarians believe Jesus being both God and man is beyond human understanding, and overemphasizing an explanation often leads to heresy.

While this debates the Christology, it makes little difference in the application. Christ's entire ministry from the incarnation, a life meeting other peoples needs, and dying for our sins, all illustrated a selfless life lived for others.

To answer the OP's question - I do not think Phil 2:5-8 says anything about the mind of Christ - that is not the meaning of φρονέω (phroneó) here.

3. To develop an attitude based on careful thought, be minded/disposed ... let the same kind of thinking dominate you as dominated Christ Jesus Phil; 2:5 (Christ went so far as to devoid himself of his divine status for the benefit of humanity ... )

Thus, Phil 2:5 is about the attitude of Jesus not His mind. This is reflected in many current translations such as:

The Apostle Paul explains it quite nicely at Philippians 2:3-8. Vs3, "Do nothing from selfishness or empty conceit, but with humility of mind let each of your regard one another as more important than himself; vs4, do not merely look out for your own personal interests, but also for the interest of others." This is not hard to understand because true love puts others first.

Vs5, Have this attitude in yourselves which was also in Christ Jesus." So what kind of an attitude and love did Jesus have? Vs6, who, although (although means in spite of the fact) He/Jesus existed in the form of God, did not regard equality with God a thing to be grasped."

vs7, but emptied Himself, (how?) by taking the form of a bond-servant, and being made in the likeness of men. vs8, And being found in appearance as a man, He humbled Himself by becoming obedient to the point of death, even death on a cross."

So what Jesus Christ did was go from one form as God and took on another form of a bond-servant/man. Instead of clinging to what was rightfully His before He became a man He forewent the prerogatives of His deity. That's what it means when it says, "He emptied Himself." John 17:5 states,

And now glorify Thou Me TOGETHER with Thyself, Father, with the glory I HAD WITH THEE BEFORE THE WORLD WAS."

Notice Hebrews 10:19-20. "Since therefore, brethren, we have confidence to enter the holy place by the blood of Jesus, vs20, by a new and living way which He inaugurated for us through the VEIL, that is His flesh."

Neither Christ's divinity, nor His Divine attributes, nor the use of those attributes, nor His glory, was in any way "emptied." Rather, these were concealed under a veil of flesh. Let me illustrate by saying that Howard Hughes was a billionaire and later in life he chose to live and look like a bum. His millions were veiled and if he wanted, he could have accessed his money at any time.

The following is what Greek Scholar A.T.Robertson says.

Being (υπαρχων — huparchōn). Rather, “existing,” present active participle of υπαρχω — huparchō In the form of God (εν μορπηι τεου — en morphēi theou). Μορπη — Morphē means the essential attributes as shown in the form. In his preincarnate state Christ possessed the attributes of God and so appeared to those in heaven who saw him. Here is a clear statement by Paul of the deity of Christ. A prize (αρπαγμον — harpagmon). Predicate accusative with ηγησατο — hēgēsato Originally words in μος — ̇mos signified the act, not the result (μα — ̇ma). The few examples of αρπαγμος — harpagmos (Plutarch, etc.) allow it to be understood as equivalent to αρπαγμα — harpagma like βαπτισμος — baptismos and βαπτισμα — baptisma That is to say Paul means a prize to be held on to rather than something to be won (“robbery”). To be on an equality with God (το ειναι ισα τεοι — to einai isa theoi). Accusative articular infinitive object of ηγησατο — hēgēsato “the being equal with God” (associative instrumental case τεωι — theōi after ισα — isa). Ισα — Isa is adverbial use of neuter plural with ειναι — einai as in Revelation 21:16. Emptied himself (εαυτον εκενωσε — heauton ekenōse). First aorist active indicative of κενοω — kenoō old verb from κενος — kenos empty. Of what did Christ empty himself? Not of his divine nature. That was impossible. He continued to be the Son of God. There has arisen a great controversy on this word, a Κενοσις — Kenosis doctrine. Undoubtedly Christ gave up his environment of glory. He took upon himself limitations of place (space) and of knowledge and of power, though still on earth retaining more of these than any mere man. It is here that men should show restraint and modesty, though it is hard to believe that Jesus limited himself by error of knowledge and certainly not by error of conduct. He was without sin, though tempted as we are. “He stripped himself of the insignia of majesty” (Lightfoot).

Paul clearly expresses the reality of Jesus not being a self-dependant entity, but of needing something other than his mortal body, sinless though he was and with clarity of purpose, to be who he needed to be - Saviour.

And being found in appearance as a man, He humbled Himself by becoming obedient to the point of death: death on a cross Phil 2:8

It is this humbling and resultant obedience (from the things he suffered Heb 5:8) over his lifetime that Paul directs believers to also - "have this mind in you".

Jesus' humility was based around total dependence on God for his success. So too should ours be. There is nothing we bring to the relationship with God except our acceptance of Jesus' accomplishment on our behalf - offered from grace, not any perceived merit. He said of himself often, 'I can do nothing of myself'.

Jesus also said there is 'no one good, except God' Surely he too was very good, but his humble servant heart showed him the place he needed to occupy. When the time was right, he would be exalted over all - this was not his to 'take', or 'to be grasped', but was God's to give. (Lucifer thought differently, he tried to take what wasn't his)

Humble yourselves, therefore, under the mighty hand of God so that at the proper time he may exalt you, 1 Pet 5:6

For this reason also God highly exalted Him, and bestowed on Him the name which is above every name Phil 2:9

Jesus answered, "If I glorify Myself, My glory means nothing. The One who glorifies Me is My Father, of whom you say 'He is our God.' John 8:54

The manner of Jesus is presented in many ways, Matt 20:26 is typical of his mind, heart and attitude, encouraging those who would hear to do likewise.

Not the answer you're looking for? Browse other questions tagged word-study philippians or ask your own question.