“Do not stay in the stronghold”

But Gad the prophet said to David, “Do not stay in the stronghold; leave, and go into the land of Judah.” So David left and went into the forest of Hereth.

Why must David leave the cave?

Note: there's this question which seem to be the same but it's about a different passage and, in addition to all of the many questions (I even think the question needs more focus), it's asked "why would David leave?". This question is different given that I seek to understand from the point of view of the law (as in, by staying David would be breaking a specific law).

1 Samuel 22:1 David left Gath and escaped to the cave of Adullam.

Adullam was located in Judah. 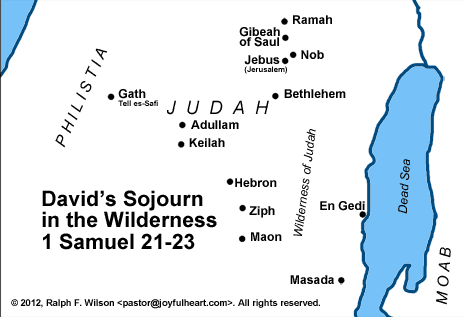 When his brothers and his father’s household heard about it, they went down to him there. 2All those who were in distress or in debt or discontented gathered around him, and he became their commander. About four hundred men were with him.

3From there David went to Mizpah in Moab and said to the king of Moab, “Would you let my father and mother come and stay with you until I learn what God will do for me?” 4So he left them with the king of Moab, and they stayed with him as long as David was in the stronghold.

This stronghold is not the cave of Adullam. It's probably located in Moab.

5 But the prophet Gad said to David, “Do not stay in the stronghold. Go into the land of Judah.” So David left and went to the forest of Hereth.

Gad's advice was good. Being the future king, David should not be away from his own country for the long term. David gradually built up his power base in Judah. Some months later in 2 Samuel 2:

1In the course of time, David inquired of the Lord. “Shall I go up to one of the towns of Judah?” he asked.
The Lord said, “Go up.”
David asked, “Where shall I go?”
“To Hebron,” the Lord answered.

Not the answer you're looking for? Browse other questions tagged law 1-samuel david or ask your own question.

27
How does Jesus' argument from David and the showbread work?
3
How did the proverb about Saul and the prophets come about?
0
How did the servant know that the Lord was with David in 1 Samuel 16:18
1
Why did Samuel think that Saul would kill him given that all of Saul's recorded erratic behavior seems to have happened later?
3
Was the brutality of David's raids unusual by the standards of ancient warfare?
3
Did Phinehas stay outside the camp after killing Zimri & Cozbi in Numbers 25?
3
Who wore the ephod in 1 Samuel 30:7?
0
Why did God not punish David as well in the incident of Uzza in 1 Chronicle 13:7-10?
1
In 1 Samuel 16:1-13 why did David not establish himself as king when Saul decided to go after him?
3
To judge by looks and appearances or Not. Choosing King David. (1 Samuel 16:7-14)