The tendency is to translate ἅπτω as cling.

However, a Hebrew word meaning cling relates to friendship.

In addition to these words and expressions, a variety of verbal forms and idioms are associated with the friend, and these provide us with additional insight into biblical presuppositions about friendship: dbq, “to cling (to),” an idiom of loyalty used of the friend in Prov 18:24 and Ruth 1:14;… -- Olyan, S. M. (2017). Friendship in the Hebrew Bible. (J. J. Collins, Ed.) (pp. 4). New Haven; London: Yale University Press.

A particular example of clinging is how Ruth stayed with Naomi, when she had no obligation to do so. Mary fit this friendship example of clinging. She listened to Jesus’ teaching to the complaint of Martha. Mary’s hurt because Jesus allowed Lazarus to die was beyond conversation. Mary was at the crucifixion. She was at the tomb, even when no one else was. What was the nature of Jesus’ statement to stop clinging?

Touch me not (μη μου ἁπτου [mē mou haptou]). Present middle imperative in prohibition with genitive case, meaning “cease clinging to me” rather than “Do not touch me.” -- Robertson, A. T. (1933). Word Pictures in the New Testament (John 20:17). Nashville, TN: Broadman Press.

However you interpret μή μου ἅπτου, γὰρ is important in οὔπω γὰρ ἀναβέβηκα πρὸς τὸν πατέρα (in John 20:17, NA28). With the interpretation of cling it seems Jesus us saying, "Mary, don't emotionally and mentally expect me down here on Earth because I'm still here. Soon I will return to the Father."

The Peshitta has ܠܴܐ ܬܷ݁ܬ݂ܩܰܪܒ݂ܺܝܢ, which has the idea of approach. The Greek makes sense with this idea, "Stop approaching me." 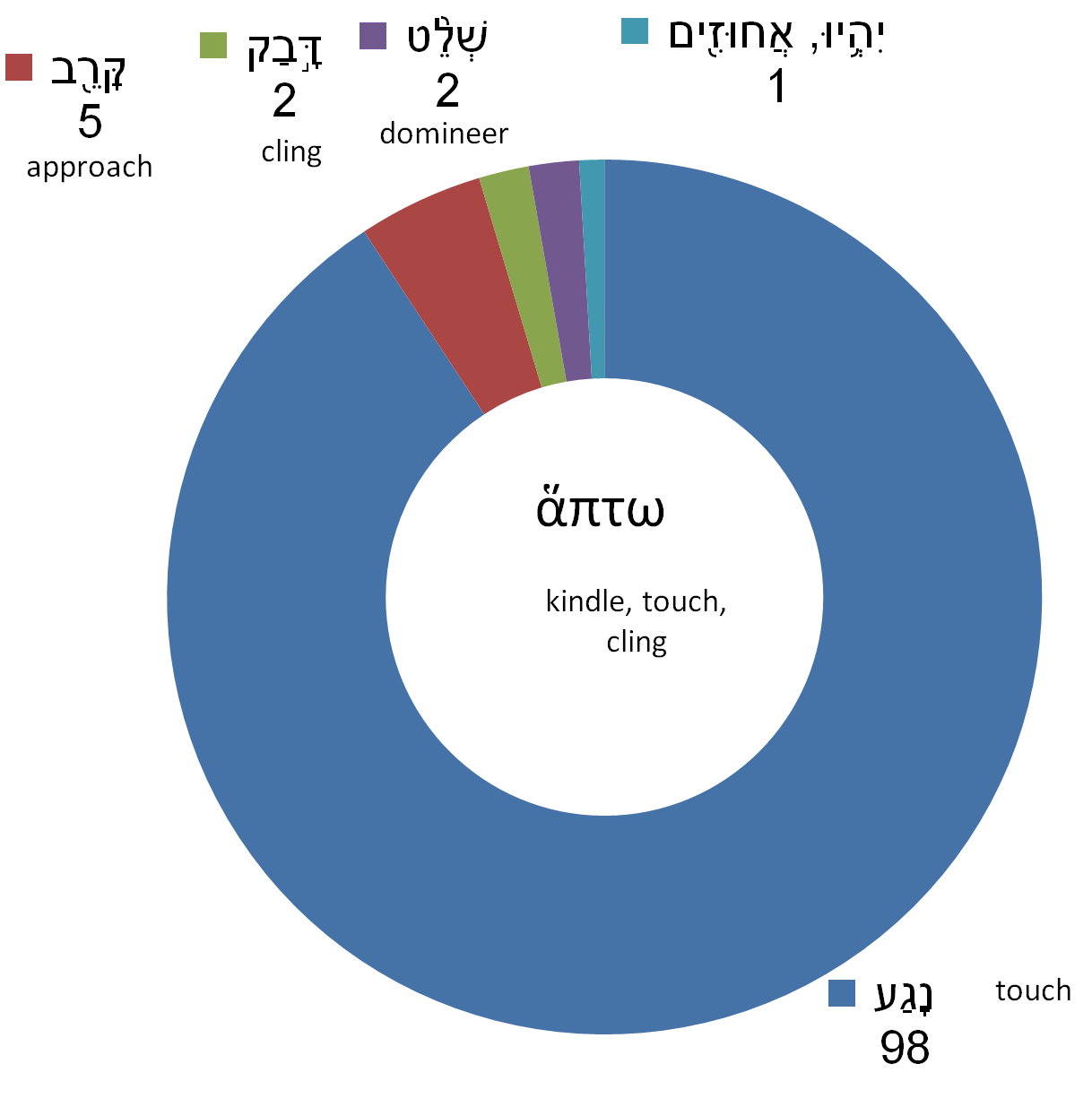 "Jesus saith to her, 'Be not touching me, for I have not yet ascended unto my Father; and be going on to my brethren, and say to them, I ascend unto my Father"

It puzzled me because of the verb translated 'ascended', which I assume referred (logically enough) to the Ascension. But others touched Jesus before the Ascension, including the women who grabbed his feet, and Jesus even invited Thomas to put his finger in his wounds.

The verb usually translated 'ascended' is 'anabaino', which means

It can instead mean simply 'go up'.

Commentary on John 20:17 in the Revised English Version (Biblical Unitarian) makes the argument that haptou here means 'touch' as opposed to 'cling'. The key, they argue, is that Jesus wasn't referring to the Ascension, he was referring to going up to the Temple and presenting himself as the High Priest. Since Mary Magdalene had just been in a tomb, she was ritually impure, and hence couldn't touch him. Once he had gone and come back from the Temple, it was then fine for others to touch him.

"One thing we must understand is that the Greek word most English Bibles translate as “ascended,” is anabainō, which is a common Greek word and is used of many types of “going up” in the New Testament. [...] Another key to understanding the verse is in the last sentence of the verse: “But go to my brothers and say to them, ‘I am going up to my Father and your Father, and my God and your God.’” Jesus said “I am going up,” using the present tense verb. That indicates that going up to his Father was something that Jesus was in the process of doing or just starting to do. [...] Another key to understanding what Jesus meant when he said he had not yet “gone up” to his Father is that Mary knew what he was talking about. [...] This should have signaled us from the start that the “going up to the Father” did not refer to his ascension into heaven, because the disciples did not know about his ascension into heaven. [...] After his resurrection, Jesus was both the High Priest (Ps. 110:4; Zech. 6:13; Heb. 5:5; 8:1) and the firstfruits (1 Cor. 15:20, 23), and he had to go to the Temple and show himself in both those roles. According to the Law of Moses, the firstfruits of the harvest were shown to God during the Feast of Unleavened Bread “on the day after the Sabbath.” [...] The day after the Sabbath is Sunday, and in the year Jesus was crucified it was Sunday the 18th of Nisan [...] After the sun came up, Jesus Christ, as the acceptable firstfruits, went up from the tomb area to the Temple on Mt. Moriah and showed himself publicly to God and was acceptable in God’s sight to represent the rest of the harvest—all the believers who will be raised from the dead. [...] As both the High Priest and the Offering, Jesus had to remain Leviticaly clean until after he offered himself, and he would not be Leviticaly clean if Mary touched him (Lev. 22:1-8). Mary was unclean by virtue of the fact that she had been in the tomb that morning and seen that the body of Jesus was gone. However, after Jesus had fulfilled his role as High Priest and firstfruits offering by showing himself in the Temple, he could let people touch him—and he did."

Given this context, the proper translation is 'Do not touch me' because it would make him ritually unclean before he went to the Temple.

Thinking he was the gardener, she said, “Sir, if you have carried him away, tell me where you have put him, and I will get him.”

She turned toward him and cried out in Aramaic, “Rabboni!” (which means “Teacher”).

17Jesus said, “Do not hold on to me, for I have not yet ascended to the Father. Go instead to my brothers and tell them, ‘I am ascending to my Father and your Father, to my God and your God.’ ”

18Mary Magdalene went to the disciples with the news: “I have seen the Lord!” And she told them that he had said these things to her.

Mary Magdalene was crying and cried out. I think she was an emotional and tactile person. She loved Jesus. When she recognized Jesus, she couldn't help but to get close and touch him. She did more than touching him.

In response, Jesus commanded (Imperative) her to stop doing what she was presently doing. The middle voice showed an intensification of her action. She was gratifying herself. She was extremely happy. So Jesus had to command her to stop because he needed to leave and ascend. The verb form, the context, and her character all suggest that she was overjoyed in seeing Jesus alive and didn't want to physically let him go. No wonder she was the first to see Jesus after the resurrection.

Not the answer you're looking for? Browse other questions tagged greek hebrew john new-testament gospels or ask your own question.

4
Meaning and significance of the greek word "ἅπτομαι" (haptomai \ haptou) in John 20:17
5
Why did Jesus tell Mary not to hold onto Him?
2
What is the logic behind Jesus' refusal to be touched / clung to by Mary because he had not yet ascended to the Father? John 20:17

0
Jesus said Θεέ μου before He died and Jesus said Θεόν μου after He rose. What is the difference?
5
What does "the life was the light of men" mean in John 1:4?
6
What did Jesus mean in John 4:22, ὑμεῖς προσκυνεῖτε ὃ οὐκ οἴδατε?
2
What does πάντα (all things) mean in John 13:3?
3
What did “the good wine” (τὸν καλὸν οἶνον) mean in John 2:10?
6
What did John mean by “second sign” (δεύτερον σημεῖον) in John 4:54?
6
What was Jesus’ πατρίδι (hometown/homeland) in John 4:44?
0
Given the dynamics of the words πλησίον and רֵעַ, what did Jesus illustrate with the Good Samaritan?
2
In John 1:14 what does ἐσκήνωσεν mean?