Does this Hebrew verb in Genesis 28:22 indicate frequency?

The verb asar עָשַׂר(to take the tenth of, tithe, Strongs 6237) is used nine times in the OT, seven times in the Piel and two times in the Qal. My question is whether or not the use of this word in Jacob's vow in Genesis 28:22 has any indication of frequency?

When used in the Piel elsewhere (Deuteronomy 14:22, 26:12, Nehemiah 10:37-38) it seems to clearly indicate regularity/frequency as opposed to a one time event. When used in the Qal (1 Samuel 8:15,17) I am uncertain although it seems (to me) that it could also be repetitive.

In Waltke and O'Connor's Biblical Hebrew Syntax, page 414, they discuss the Piel used for fractional numbers and "to illustrate the frequentative aspect of Piel" they cite from Genesis 28:22. I've attached a picture of their comments, does this mean Waltke/O'Connor are arguing that the verb in Genesis 28:22 may indicate frequency (more than one time)? 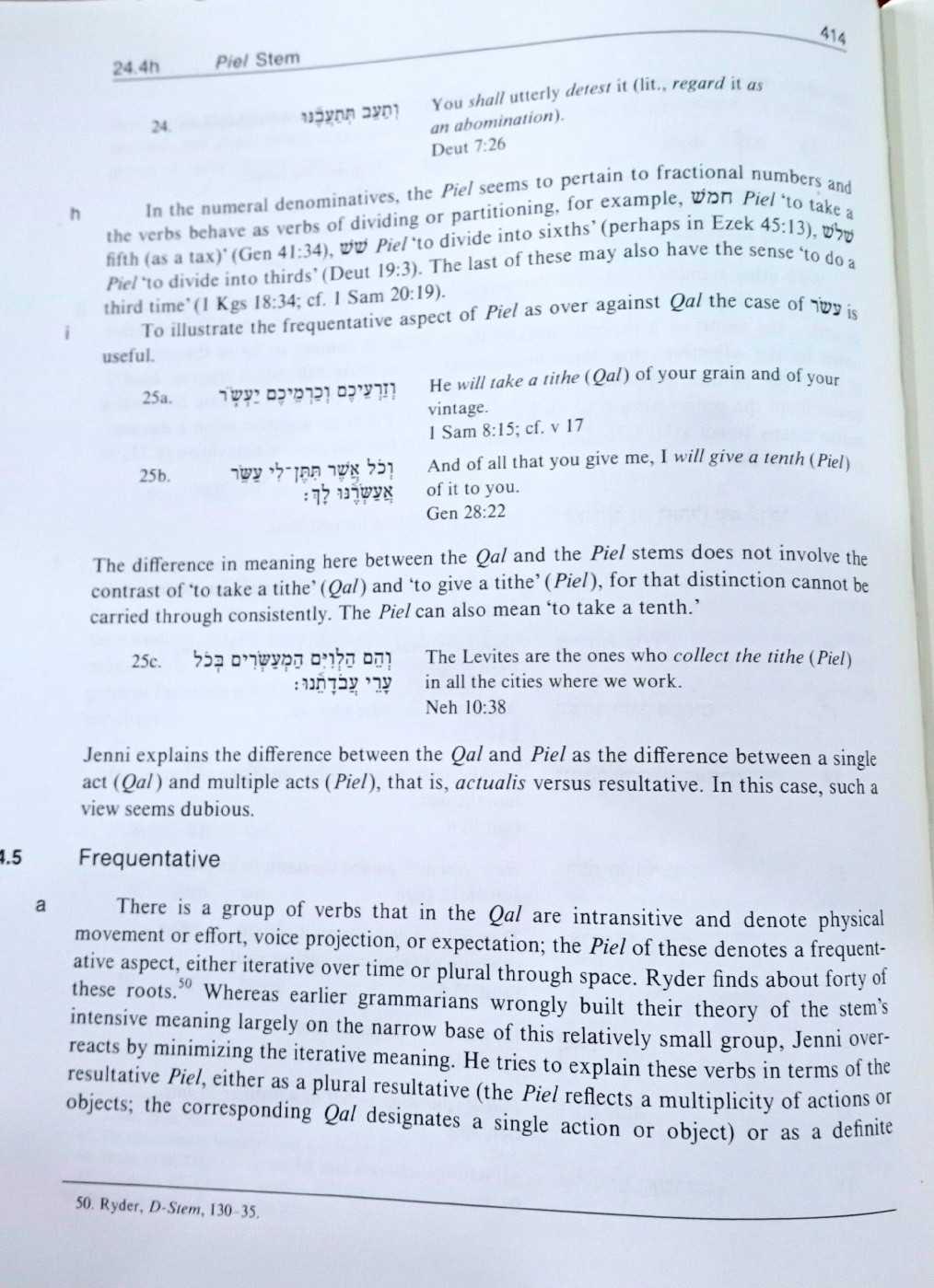 Yes, p. 414 is a bit tricky to read. The key to sorting this out is to make a distinction between repeating a fixed number of times vs repeating indefinitely according to a certain frequency.

and this stone that I have set up as a pillar will be God's house, and of all that you give me I will give you a tenth."

According to Waltke and O'Connor, Jacob tithed periodically.

According to Jenni, it was different. Jenni emphasizes on the resultative aspect of the Piel stem, not necessarily the frequency aspect. To Jenni, Jacob tithed a fixed number of times and not according to an orderly frequency. I'd go more with Waltke and O'Connor in this case because the resultative nuance is already somewhat reflected by the Imperfect.

Caveat emptor:
Nobody speaks like a mathematician on a daily basis. Language, despite its formal grammar, by nature, contains ambiguities. In each case, I'd weigh these two positions along with the context of the case to determine its more probable meaning.

Does this Hebrew verb for tithe in Genesis 28:22 indicate frequency?

Yes, according to Waltke and O'Connor.

No, according to Jenni.

I'd go more with Waltke and O'Connor in this case.

22
Does the original Hebrew support the NLT of Genesis 6:3?
2
Genesis 3:13 Does the Hebrew actually say הִשִּׁיאַ֖נִי deceived ME?
2
Why does the Hebrew in Genesis 3:16 indicate that the man will rule “her” or “you” when it looks as if the Hebrew isn't a personal pronoun?
7
Does Genesis indicate everyone has Noah's sons as common ancestors?
4
Why is this verb “לַעֲשׂוֹת” infinitive? (Gn 2:3)
5
How do you parse this verb (וְהִשְׁקָה)?
3
According Genesis 11:7 'God נבל man's language'. Is it correct to translate the Hebrew verbal form נבל with the verb 'to confound'?
1
Does 'evening and morning' in Genesis 1:5 indicate that 'Day' brackets (or includes) 'Night'?
1
Does Genesis 3:22 indicate that Adam was already subject to death before he sinned?
3
What does the phrase 'she may bear on my knees' mean in Genesis 30:3?