How can Jesus inherit David's throne since he's a descendent of Jehoiakim?

Based on Luke Jesus will inherit David's throne, however, Jehoiakim descendants can Not sit on David's throne as he is cursed by God.

Jeremiah 36:30 Therefore this is what the LORD says about Jehoiakim king of Judah: He will have no one to sit on the throne of David; his body will be thrown out and exposed to the heat by day and the frost by night.

Luke 1:32 - 32 He shall be great, and shall be called the Son of the Highest: and the Lord God shall give unto him the throne of his father David:

The below confirm lineage of David to Jehoiakim.

Matthew 1:1-11, "Josiah was the father of Jehoiachin and his brothers (born at the time of the exile to Babylon)."

Luke 1:27 To a virgin espoused to a man whose name was Joseph, of the house of David; and the virgin’s name was Mary. does not mention Mary lineage to David

Jesus is not in the lineage of Jechoniah the cursed one!

30 Thus says the Lord: “Write this man down as childless, a man who shall not succeed in his days, for none of his offspring shall succeed in sitting on the throne of David and ruling again in Judah.” Jeremiah 22:30 (ESV)

Jeconiah (who is also called Jehoiachin or Coniah). In this scripture verse who the prophet Jeremiah is pronouncing a curse over the lineage of king Jeconiah such that none of his descendants would sit on the throne of David and ruling anymore in Judah.

The curse is upon Jeconiah son of Jehoiakim son of Josiah.

Therefore thus says the Lord concerning Jehoiakim king of Judah: He shall have none to sit on the throne of David, and his dead body shall be cast out to the heat by day and the frost by night. Jeremiah 36:30 (ESV)

“As I live, declares the Lord, though Coniah the son of Jehoiakim, king of Judah, were the signet ring on my right hand, yet I would tear you off Jeremiah 22:24 (ESV)

The Jechoniah in Matthew is son of Josiah. 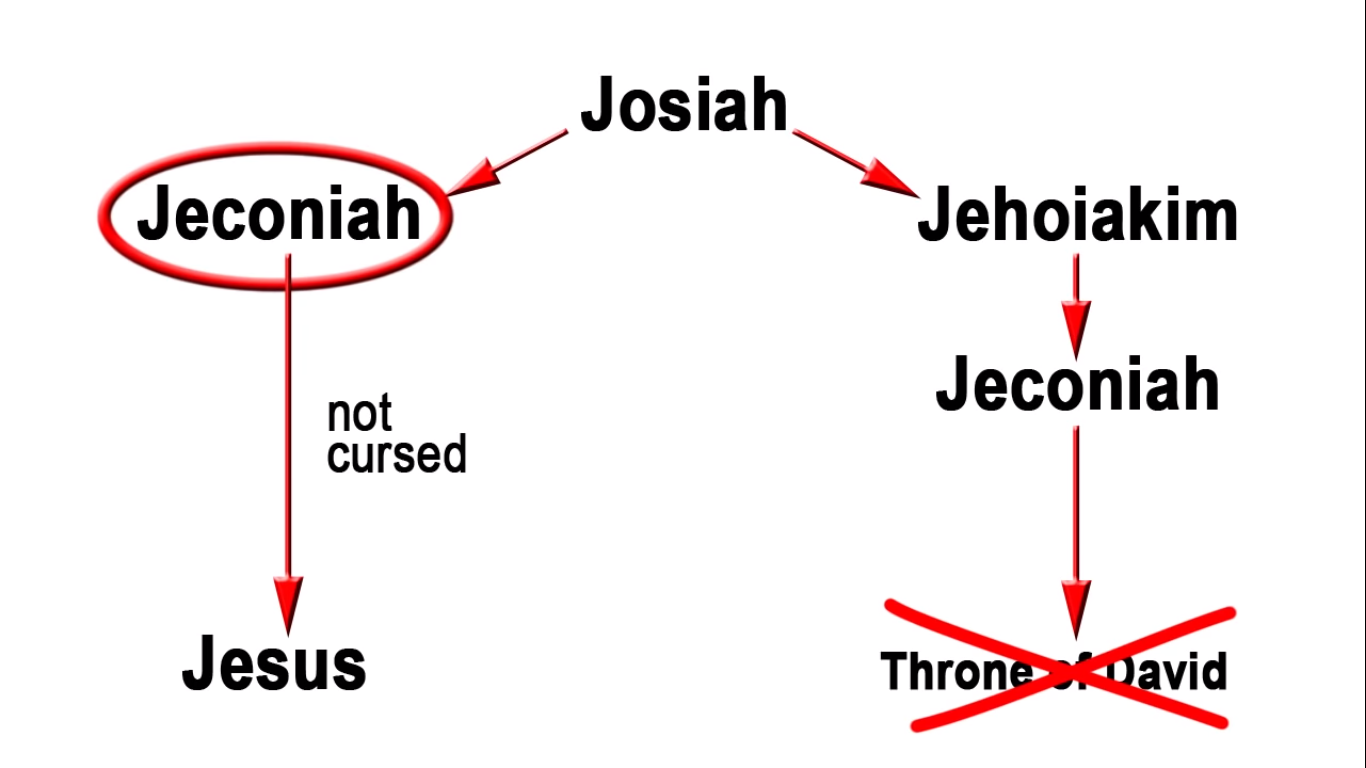 But Josiah never had a son named Jechoniah!?

The sons of Josiah: Johanan the firstborn, the second Jehoiakim, the third Zedekiah, the fourth Shallum. 1 Chronicles 3:15 (ESV)

And Pharaoh Neco made Eliakim the son of Josiah king in the place of Josiah his father, and changed his name to Jehoiakim. But he took Jehoahaz away, and he came to Egypt and died there. 2 Kings 23:34 (ESV)

And the king of Babylon made Mattaniah, Jehoiachin's uncle, king in his place, and changed his name to Zedekiah. 2 Kings 24:17 (ESV)

And his servants carried him [Josiah] dead in a chariot from Megiddo and brought him to Jerusalem and buried him in his own tomb. And the people of the land took Jehoahaz the son of Josiah, and anointed him, and made him king in his father's place. 2 Kings 23:30 (ESV)

For thus says the Lord concerning Shallum the son of Josiah, king of Judah, who reigned instead of Josiah his father, and who went away [died] from this place: “He shall return here no more, Jeremiah 22:11 (ESV)

This leaves us with the firstborn Johanan. The Hebrew scriptures never mentions his name being changed, this clue we only find in Matthew 1:11 Josiah the father of Jechoniah and his brothers, at the time of the deportation to Babylon.

Jeconiah had brother's not a brother;
Many scholars claim that Josiah beget Jeconiah also can mean as a grandfather, and that is also a possibility however there is one thing that makes this idé to not fit.

The descendants of Jehoiakim: Jeconiah his son, Zedekiah his son; 1 Chronicles 3:16 (ESV)

The descendants of Jehoiakim: Jeconiah his son, Zedekiah his son; 17 and the **sons of Jechoniah **, the captive: Shealtiel his son, 18 Malchiram, Pedaiah, Shenazzar, Jekamiah, Hoshama and Nedabiah; 19 and the sons of Pedaiah: Zerubbabel and Shimei; and the sons of Zerubbabel: Meshullam and Hananiah, and Shelomith was their sister; 20 and Hashubah, Ohel, Berechiah, Hasadiah, and Jushab-hesed, five. 1 Chronicles 3:16-20 (ESV) 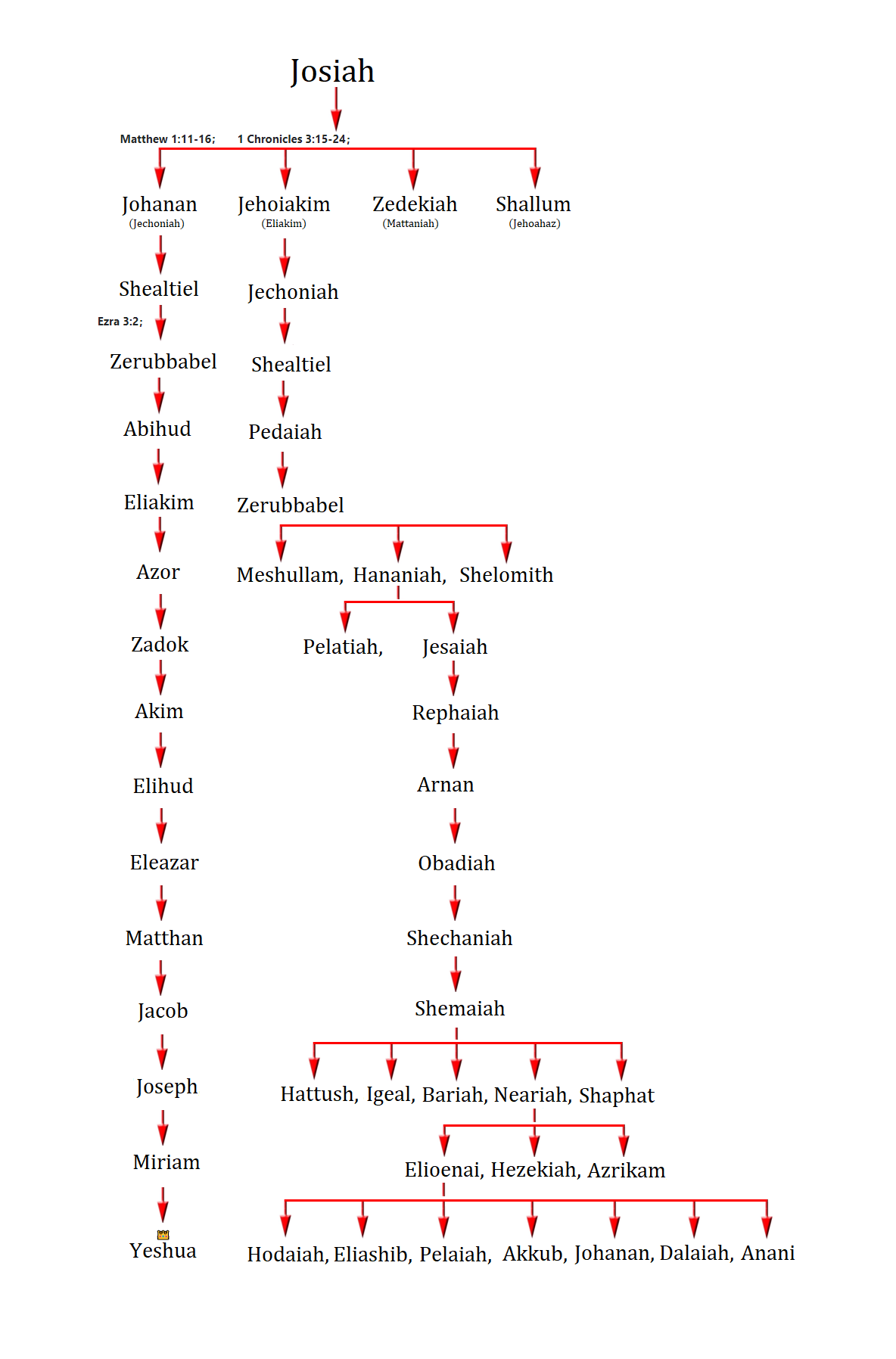 The curse put onto Jehoiakim would have passed onto Jesus if Joseph had of ‘fathered’ Jesus. Joseph was in the line of David - but so was Mary, and Mary”s line did not come “under’ the curse of Jehoiakim, which was for ‘males’. Jesus qualifies as a legal consideration for the Throne under two lines! (of genealogy).

Joseph was a descendant of Jeconiah, but Jesus was virgin born by the Holy Spirit (Matt. 1:20; Luke 1:35). Had Joseph been his actual physical father, Jesus would not have been able to sit on the throne of David as the Messiah-King. Jesus’ only human parent was Mary. Consequently, He inherited the royal blood line through Mary and the legal right to be king through his father, Joseph. And, by not being a direct descendant, He avoided the “curse.”

So Jesus will be able to, and will legitimately take the Throne of David, in Jerusalem, as both promised (to Israel) and prophecied throughout the Old Testament.

The Bible indicate that the curse on Jeconiah was reversed or lifted because of his repentance. Zerubbabel is the grandson of Jeconiah.

Since no descendant of Jeconiah could ever sit on the throne (Jeremiah 22:24 and 22:30), if Jesus is a descendant of this cursed king, he is disqualified from being the Messiah.

If true, then what is Jeconiah doing in the genealogy of Jesus in Matthew's gospel? And how can Jesus qualify to be the Messiah? First of all, we have to wonder why Matthew would ever have included Jeconiah among the ancestors of Jesus if this so obviously disqualified Jesus from being the Messiah. In fact, the Scripture shows that the curse was only short-term, if not altogether reversed by God.

There are three parts to the curse on Jeconiah (who is also called Jehoiachin or Coniah):

The Scripture shows that in fact none of these took place.

Though the Hebrew literally reads, "Record this man childless," Jeconiah in fact had children.

He did prosper in his day.

In the thirty-seventh year of the exile of Jehoiachin king of Judah, in the year Evil-Merodach became king of Babylon, he released Jehoiachin from prison on the twenty-seventh day of the twelfth month. He spoke kindly to him and gave him a seat of honour higher than those of the other kings who were with him in Babylon. -- 2 Kings 25:27-28

His grandson Zerubbabel prospered and ruled. In fact the same words God used in rejecting Jeconiah were deliberately used in establishing Zerubbabel.

"As surely as I live," declares the LORD, "even if you, Jehoiachin son of Jehoiakim king of Judah, were a signet ring on my right hand, I would still pull you off. -- Jeremiah 22:24

Though Zerubbabel did not sit on the throne as king, the fact that Haggai 2:23 uses the same terminology as Jeremiah 22:24 shows that Haggai intended to indicate a reversal of the curse.

We have to conclude that in Jeremiah 22:30, "in his lifetime" qualifies the following phrases, and "for" explains that no descendant of his will prosper and rule during his lifetime.

We find ample rabbinic sources which also agree that God reversed the curse on Jeconiah, which they attribute to repentance on Jeconiah's part. We even find the idea that the Messiah will descend from Jeconiah--exactly the opposite of what some say is impossible! I am quoting just a few from the article: JewsforJesus The Jeconiah Problem:

1. Sources stating that Jeconiah repented and so God reversed the curse.

R. Johanan said: Exile atones for everything, for it is written, Thus saith the Lord, write ye this man childless, a man that shall not prosper in his days, for no man of his seed shall prosper sitting upon the throne of David and ruling any more in Judah. Whereas after he [the king] was exiled, it is written, And the sons of Jechoniah, -- the same is Assir -- Shealtiel his son etc.(1) [He was called] Assir, because his mother conceived him in prison. Shealtiel, because God did not plant him in the way that others are planted. We know by tradition that a woman cannot conceive in a standing position. [yet she] did conceive standing. Another interpretation: Shealtiel, because God obtained [of the Heavenly court] absolution from His oath.(2)

(1) I Ch. III, 17. Notwithstanding the curse that he should be childless and not prosper, after being exiled he was forgiven. (2) Which He had made, to punish Jechoniah with childlessness.

2. Sources stating that the Messiah will descend from Jeconiah.

Scripture alludes here to the verse Who art thou, O great mountain before Zerubbabel? Thou shalt become a plain (Zech. 4:7). This verse refers to the Messiah, the descendant of David. . . .From whom will the Messiah descend? From Zerubbabel.

Malbim calls to our attention that in the prophecy of Haggai (2:23), God says, "On that day I will take you, Zerubbabel, and I will make you like a signet," for the King Messiah will be like a signet ring on God's right hand, so to speak. Just as the name of the owner of the ring is engraved on his signet ring, through which he makes himself known, so will God's name be known in the world through the King Messiah, through whom His miracles will be known. He says here that, though, in the future, Coniah will be the signet on My right hand, for the Messiah will spring from his seed, now I will remove him from there.

Jehoiachin's sad experiences changed his nature entirely, and as he repented of the sins which he had committed as king he was pardoned by God, who revoked the decree to the effect that none of his descendants should ever become king (Jer. xxii.30; Pesik., ed. Buber, xxv. 163a, b): he even became the ancestor of the Messiah (Tan., Toledot, 20 [ed. Buber, i. 140]).

Not the answer you're looking for? Browse other questions tagged jesus contradiction jeremiah or ask your own question.

8
What does "he delivers the kingdom to God the Father" mean in 1 Corinthians 15:24?
17
How can John 3:13-14 be reconciled with what happened to Enoch, Elijah and Jesus?
5
Do the words "Israel" and "Jews" have a different meaning in the Gospels?
4
How can a child in Isaiah 9:6 born in the north be the same child in Micah 5:2 in the south?
2
From what tribe did Jesus come?
6
How can Jesus say that Jews are the children of the devil (John 8:44) and provide salvation (John 4:22)?
12
If Jesus is God, how can we make sense of Him calling the Father "my God" in John 20:17?
2
Evidence that Shallum is king Jehoahaz?