Criticism of the Vulgate: alleged errors and inaccuracies in translation

I often hear that the Latin Vulgate has many inaccuracies of translation.

I often hear such criticism from Protestant circles; this (or the relative lack of such discourse among Catholics) might have to do with the role the Latin language and the Vulgate plays within the Roman Catholic church. I have to say this give proper context, but please avoid political discussion (and feel free to improve the wording of the question); some listings on the internet seem rather hot-headed. Naturally, the question of the "best translation" is a perennial one, and translation criticism is common for many Bible translations, no matter what denominations they are used in.

Back to the question: I would like to learn more about (real or alleged) errors or inaccuracies in translation in the Vulgate.

This one is my favorite, from the Duoay-Rheims Bible (an English translation of the Vulgate):

Ex 34:29-35 And when Moses came down from the mount Sinai, he held the two tables of the testimony, and he knew not that his face was horned from the conversation of the Lord. And Aaron and the children of Israel seeing the face of Moses horned, were afraid to come near. And being called by him, they returned, both Aaron and the rulers of the congregation. And after that he spoke to them. And all the children of Israel came to him: and he gave them in commandment all that he had heard of the Lord in mount Sinai. And having done speaking, he put a veil upon his face. But when he went in to the Lord, and spoke with him, he took it away until he came forth, and then he spoke to the children of Israel all things that had been commanded him. And they saw that the face of Moses when he came out was horned, but he covered his face again, if at any time he spoke to them.

This mistranslation is actually the origin of some hilarious art, including: 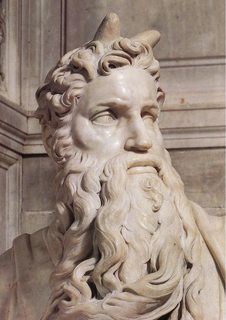 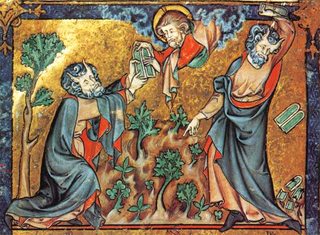 As arrows in the hand of the mighty, so the children of them that have been shaken. (Duoay-Rheims)

Like arrows in the hand of a warrior,
So are the children of one’s youth. (NKJV)

Sorry, couldn't find any good art for this one.

There are plenty of other weird translations in the Vulgate. They aren't difficult to find: a few minutes comparing a good translation to the Douay-Rheims Bible, especially if you know the passage well, should yield interesting results.

I'm also looking for criticism of Jerome's Vulgate, particular in texts from his own time or written not too long later.

I find terrifying the idea that no one ever complained (or noticed?) that when facing the word "maschiach" (translated to greek with "christos" and meaning "anointed", or if you prefer "the one who got oil poured on"), instead of translating to Latin using its most direct and logical translation, the word "unctus", Jerome just pretendad that Latin word didn't exist and chose instead to transliterate from Greek, thus inserting the word "Christus" in the Vulgata. I understand that he probably thought that the Romans wouldn't have accepted to worship someone called "Jesus the Greasy", but still I find this too much of a philological catastrophy to have gone unseen for 1600 years? Or maybe it wasn't him who picked the word "Christus" but some later theologist?

Of course there are some unexpected side effects of this choice, among which I find particularly bizarre Jerome's rendering of Isaiah 45:1, where he actually writes "This said the Lord, to my Christ Cyrus", see for yourself:

If anyone is aware of any Roman or medieval criticism (or manipulation) of this particular word, I'd highly appreciate you get back to me! Thanks in advance :-)

Not the answer you're looking for? Browse other questions tagged translation-philosophy tools-of-biblical-studies latin-vulgate or ask your own question.