Numbers 28: Is the difference between noun-adjective and genitive cases for the burnt offering significant?

I know that in Biblical Hebrew (and presumably other varieties), we see the construct "noun adjective", with the noun unmodified, such as parah adamah (red heifer, parah = heifer). We also see the genitive (noun-chain) construct, "noun noun", which usually means "noun (of) noun", and in that case the first noun is modified: eishet chayil (woman of valor, eishet instead of ishah), birkat kohanim (blessing of priests, birkat instead of b'racha).

I recently noticed both olah tamid and olat tamid (burnt offering) in Numbers 28, but I don't see why the grammar would be different between the uses. The former is what I'm used to seeing, for example in Num 28:3:

I see the comma there (which was not in the book I first saw this in). Punctuation, of course, is editorial (and I understand that it is related to the trope, which is also not original). In both cases the text seems to be describing a continual olah (burnt offering). And later, in 28:10, we see another olat formation without any complicating punctuation:

If you feel that עולה תמיד us the expected form then the second form is simply extended use of the construct form. Biblical Hebrew is fluid and is often flexible with the grammatical constructs, a sort of linguistic poetic licence (although usually adopted for reasons of preferential rhythm, and not arbitrarily). For a few examples where the construct state is "unexpectedly" adopted, see:

Although I'm not sure what the basis for that hypothesis would be though. The construct form seems the natural state for all of those phrases since the second word isn't an adjective, but a governed noun. Moreover, that seems to be the only place in the entire Old Testament where the phrase appears as עלה and not עלת (when followed by its appropriate descriptive noun and not as a stand alone word). This would lead me to think that the first form is the only one that requires justification.

The simplest explanation would be a comma between the words: "it is an olah offering [comma] eternally". And subsequent references to that offering will then call the offering by the description in its definition. It's like there was an implicit clause similar to that of a contract: "hereinafter referred to by 'eternal offering'". For example, an author may tell the story of "one who remained young, a boy, forever" and then subsequently refer to Peter Pan as "eternal-boy", or something of the like.

As an aside, if you're already looking at the grammar of those verses, then note the mismatched gender in עלת שבת בשבתו. Both עלה and שבת are feminine, and yet the reference is masculine.

Frankly, I think it is a scribal error.

Examination of the Samaritan Pentateuch reveals עלת instead of עלה. 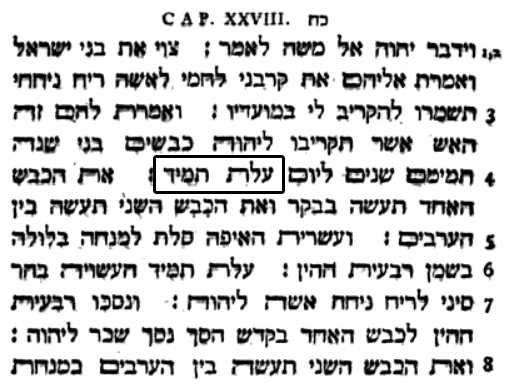 (NOTE: i translate tamid as steady, which is not most accurate translation, but will suit our purpose)

olah is ending a sentence and the word rising is more appropriate however olas is at the beginning of a sentence meaning "a rise of steadiness which..." and in the other verse "a rise of shabbos in its..."