“Give back to Caesar what is Caesar’s and to God what is God’s.” - was Jesus referring to tithing in Mark 12:17?

17 Then Jesus said to them, “Give back to Caesar what is Caesar’s and to God what is God’s.”

What is God's that we have to give back to him? Was Jesus referring to tithing?

BDAG is a little more detailed by providing five basic meanings for this word:

Thus, in the opinion of BDAG, ἀποδίδωμι means (in Matt 22;21, Mark 12:17, Luke 20:25) to render taxes as required under Roman law or other things to authorities. This is confirmed by the fact that Jesus' famous answer was in response to a question about paying taxes to Caesar. Paul is more explanatory here:

Rom 13:7 - Pay everyone what you owe him: taxes to whom taxes are due, revenue to whom revenue is due, respect to whom respect is due, honor to whom honor is due.

Thus, Jesus' principle recorded in the Gospel can be seen as just one aspect of a broader principle enunciated by Paul in Rom 13. Thus, we may understand that Jesus was saying what to render to various authorities:

Tithing was part of the system of financial support under the Israelite economy. It is never mentioned in the NT (except as the practice of punctilious pharisees in Luke 18:12, 11:42, Matt 23:23 and in Heb 7 as part of the story of Abraham) not forbidden (it appears to be assumed in the back-ground at times).

Therefore, I believe our responsibility to God far exceeds the simplistic requirement of tithing, but requires an entire commitment to His service.

What is it that belongs to God that we need to give back to him? I do not think that Jesus was referring to tithing. In fact, I do not think he was speaking about money at all. In order to get to what he might really be saying, I examined the context of the question that prompted his answer:

This question posed by the Pharisees was highly inflammatory considering that the region was under Roman occupation and rule:

From Ellicott’s Commentary for English Readers: The question was obviously framed as a dilemma. If answered in the affirmative, the Pharisees would be able to denounce Him to the people as a traitor to His country, courting the favour of their heathen oppressors. If in the negative, the Herodians (on the assumption which seems the more probable) could accuse Him, as He was eventually accused, of “perverting the nation, and forbidding to give tribute to Caesar” (Luke 23:2).

In my opinion, the first part of Jesus’ answer addressed only the superficial issue of paying taxes:

The Roman coin bore the image of the emperor and should be returned to the emperor. In wording the answer this way, Jesus side-stepped the question of authority. It is only in the second part of his answer that Jesus would address the underlying issue of authority:

At first glance the second part of the answer is similar to the first, but it is only so in structure. How can Caesar’s authority be compared to God’s? The incongruity of this comparison would not have been lost on Jesus’ audience. God is the creator of the heavens and the earth (Gen 1:1-27), thus all authority in heaven and on earth lies solely with God. Jesus’ answer left them “utterly amazed” (Mt 12:17).

Furthermore, note that before answering the question, Jesus asked:

These words bring to mind the beginning of his ministry when Jesus was “led up by the Spirit into the wilderness to be tempted by the devil”:

Comparing Jesus’ responses from these two events, if we follow the implications of the words “[give] to God the things that are God’s,” they will lead us to “worship God and serve only him.”

Looking toward the end of Jesus’ life, the issue of authority again resurfaces during Jesus’ trial under Pilate:

Jesus refuted Pilate’s authority over his life and reclaimed that authority as God’s alone. After all, it is God who created man in his own image and who “breathed into his nostrils the breath of life” (Gen 1:27 and Gen 2:7). Thus from the beginning to end, Jesus consistently upheld God’s ultimate power and authority over all things. We in turn are called to give back to God the things that are God’s and to “worship and serve only him.”

But because he knew their hypocrisy, he said to them, “Why are you testing me? Bring me a denarius so that I can look at it!”

So they brought one. And he said to them,

“Whose image (eikon) and inscription (epigraphe) is this?”

And Jesus said to them, “Give to Caesar the things of Caesar,

and to God the things of God!”

And they were utterly amazed at him.

The parallel here is that Caeser minted the coins, stamping them with his image and putting his inscription -- meaning he wrote his name on the coin.

Here are two of the denarius in question, minted around the time of Christ and in circulation in the region:

Here is a second: 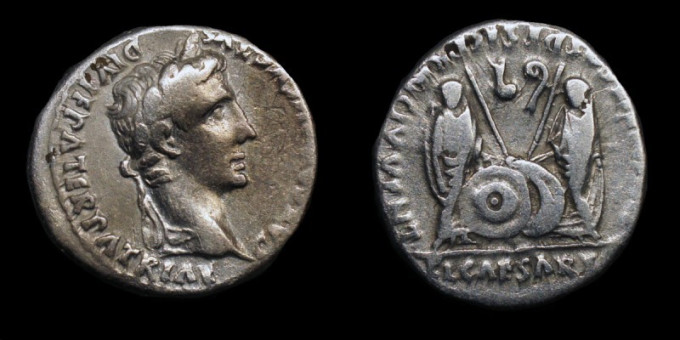 Therefore you belong to God even as your coins belong to ceaser.

To interpret this in terms of tithing, e.g. that your coins belong to God, would be a misreading of the text, IMO, and this is not something that would cause the people to be amazed.

What caused them to be amazed was this clear delineation between the sacred and the secular, the things of man versus the things of God. Pay your taxes but live for God.

“Will a man rob God? Yet you have robbed Me! But you say, ‘In what way have we robbed You?’ In tithes and offerings.

You are cursed with a curse, For you have robbed Me, Even this whole nation.

This makes it rather clear that tithes belong to God, and tithing is simply returning something to its rightful owner.

Jesus's "Give back to God what is God's" is simply echoing this idea.

Not the answer you're looking for? Browse other questions tagged jesus mark or ask your own question.

0
Give vs give back to Caesar/God

37
What was Jesus referring to by "the eye of the needle"?
19
Why is the "give to Caesar what is Caesar's" answer so great?
18
Was Jesus angry and if so why in Mark 1:41?
5
Matt. 22:15-22 says, "Give back to Caesar what is Caesar's and to God what is God's."Did Jesus proclaim a separation of church and state?
6
In Mark 3:20-12, did Mary, the mother of Jesus suspect that he was crazy?
11
In Mark 4 what does Jesus mean by "the secret of the kingdom"?
1
Does Caesar know of Jesus?
1
Why did the pharisees and the party of Herod's followers plan to kill Jesus? Is it likely that Jesus' trial was rigged?
1
In Mark 12:17, was Jesus referring to obligatory sacrifices to the Emperor?
0
Give vs give back to Caesar/God