Usage of an uncommon Hebrew word for "shone" in Exodus

And it came to pass, when Moses came down from mount Sinai with the two tables of testimony in Moses' hand, when he came down from the mount, that Moses wist not that the skin of his face shone while he talked with him.

And when Aaron and all the children of Israel saw Moses, behold, the skin of his face shone; and they were afraid to come nigh him.

And the children of Israel saw the face of Moses, that the skin of Moses' face shone: and Moses put the vail upon his face again, until he went in to speak with him.

The word for "shone" being used in this chapter is qaran. Interestingly,

What's the reason behind using this term here? Could it be related with the golden calf?

Note that there's another question about the term used but with a different take.

Hebrew has a variety of words to express the idea of "shining" such as:

Just why Moses elected to use the word he did in this occasion is not explained and is left as a mystery in the commentaries. The Cambridge commentary also observes this peculiarity:

shone viz. from the reflexion of the Divine glory (Exodus 24:16 f.). The Heb. verb is a peculiar one, recurring only vv. 30, 35: it is a denominative from ḳéren, ‘horn,’ in the sense of ray (see Habakkuk 3:4), and means thus, was rayed. Jerome, following Aq., rendered literally in the Vulg. quod cornuta esset; hence the frequent representation of Moses in art with horns rising out of his head.

In Ps 69:31 it is used of "horns". Interestingly, the DRB, which is a direct translation of the Clementine Latin text, misunderstood this word and its idiomatic meaning. When Michelangelo carved the statue of Moses (now in St Peter's Basilica) he included two horns on Moses' head - see picture below. Barnes notes the same thing.

The word translated "shine" is closely connected with a word translated "horn"; and hence, the Latin version and others have rendered the verb "to be horned." From this rendering of the word has arisen the popular representation of Moses with horns on his forehead; e. g. in Michaelangelo's statue at Rome. 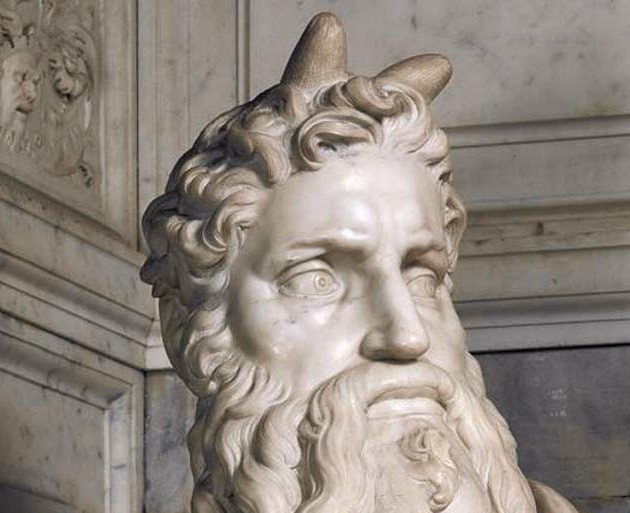 I see no link between these "horns" in Ex 34 and the golden calf incident.

There are a few things going on here. Hebrew verbs have paradigms, e.g. different conjugations, and these paradigms determine different meanings in a way similar to, but not really the same as, how in indo-european languages you conjugate differently based on direct versus indirect object.

In this case, quaran means "to shine" in it's basic Qal paradigm (the most common, default paradigm) but in the Hiphil paradigm it means "to have horns". It's the same lemma, but based on the conjugation we can determine the meaning. This is an extreme example of meaning changing based on paradigm.

Now there must be some relationship between horns and shining to explain why the Hiphil is to have horns, and that is that horns in cattle cultures are a symbol of power and strength. Do a word search in the old testament on "horn" and it's very fascinating. So with this knowledge, it begins to make more sense. Hiphil is often (but not always) interpreted as a causative form. So if in Qal the verb is "to cook", then the Hiphil might be "to cause someone to cook". Again, this is just one useful way of thinking about Hiphil but these paradigms defy simple categorization. But at least here it makes sense that a causative agent for "shining" would be "power" and thus "horn".

As a fun-fact bonus, it said that a mistranslation of Qaran caused Michelangelo to paint Moses as having horns, when in reality his face was shining. But in retrospect, I wonder if Michelangelo knew exactly what he was doing, as portraying Moses as a source of power by decorating him with horns would be a clever and historically appropriate illustrative device. Then again this could be my own personal whimsy.

'wr is a verb that means "to give light". See gen 1.15. Note that it is not the noun 'or which means "light". 'or is never translated as "shine" but the verb 'wr is translated as shine. One is a verb, the other a noun.

Although there is certainly semantic overlap between 'wr and quaran, the former focuses on "giving light" whereas the latter suggests light emitting from a source of power. Both of these semantic regions overlap in what we would call "to shine", but they do have different semantic ranges so are not exact synonyms.

What's the reason behind using this term here?

Because the author is emphasizing the glorification/radiance of Moses due to the power within him, rather than making a statement about illumination.

The Israelites feared Moses because of his radiance - the hebrew word is literally "dread" (Ex 34.30).

In Psalm 104.2 God is described as "clothed" with light. you who cover yourself with light as with a garment, who stretch out the heavens like a tent curtain,

If it was just a light source -- something shining -- then this does not cause us to dread or be terrified.

Therefore the use of Quaran reinforces this notion of power better than the use of 'wr.

Unlikely. If you are suggesting some kind of wordplay, which is very common in the old testament, you should provide more examples.

When Moses came down from Mount Sinai with the two tablets of the covenant law in his hands, he was not aware that his face was radiant because he had spoken with the LORD.

This is how Paul understood it:

Now if the ministry that brought death, which was engraved in letters on stone, came with glory, so that the Israelites could not look steadily at the face of Moses because of its glory, transitory though it was,

Paul saw the shining from Moses' face as glory originated from God when Moses was in close quarters with God. His face shot out horns or power so much so that

30 When Aaron and all the Israelites saw Moses, his face was radiant, and they were afraid to come near him.

It must have been a rather awesome sight.

No. The golden calf was an idol. It has no real power or glory. It was completely destroyed by Moses.

Exodus32:19 When Moses approached the camp and saw the calf and the dancing, his anger burned and he threw the tablets out of his hands, breaking them to pieces at the foot of the mountain. 20And he took the calf the people had made and burned it in the fire; then he ground it to powder, scattered it on the water and made the Israelites drink it.

On the other hand, Moses' face reflected true glory from God. Moses spent so much time with God that his face absorbed some of God's glory. Gradually, this absorbed glory radiates from his face over time. This Hebrew word was rarely used because rarely did anyone get so close to God. Nevertheless, Jesus' glory exceeds that of Moses' reflected glory.

And we all, who with unveiled faces contemplate the Lord's glory, are being transformed into his image with ever-increasing glory, which comes from the Lord, who is the Spirit.

Moses reflected glory grew dimmer over time. In the new covenant, we do not just reflect God's glory. The Spirit transforms us from the inside into more and more glory. Instead of diminishing, it is increasing. We are growing in glory in the Spirit in Christ. That's the good news compared to Moses reflected glory.

Not the answer you're looking for? Browse other questions tagged hebrew word-study exodus word-choice or ask your own question.

3
Did Moses have horns according to Exodus 34?

9
In Exodus 32:20, why did Moses make the Israelites drink the ground calf & water mixture?
5
Which fell first the manna or the quail in Exodus 16 & Numbers 11?
2
Who wrote the second set of tablets in Exodus 34:27 & Deutoronomy 10:1-4?
3
Exo 32:20: Was it part of a Mosaic atonement ritual to drink water mixed with the ashes of the golden calf?
3
Did Moses have horns according to Exodus 34?
4
Is there a difference between מַסְוֶה and צָעִיף (veil)?
0
How does Moses opt to use הָ֣אֱלֹהִ֔ים for judges in Exodus 21:6?
0
Exodus 33:18, Did Moses see the Glory of the LORD?
5
Different words to describe the "rod serpent"
1
Could the radiance in Moses face be linked to the golden calf incident and the second set of tablets?