Does “flower of the field” mean “poppy”? 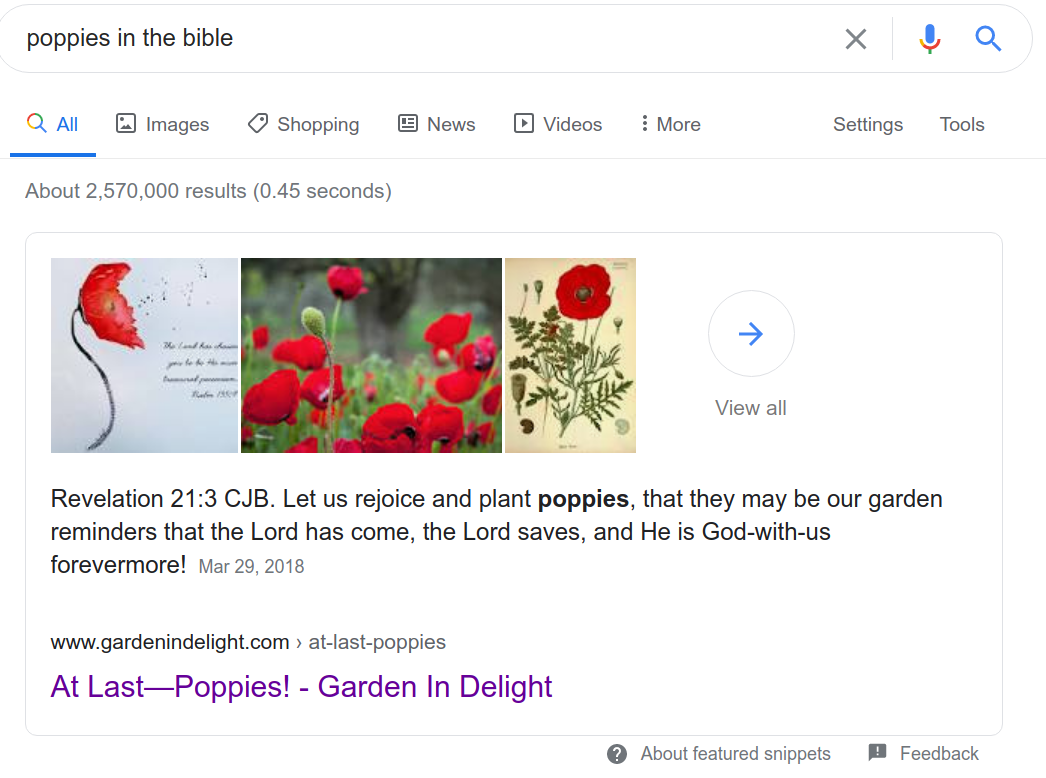 The above snippet is totally wrong (not Google's fault, the page has awful HTML), but even when I look at better pages, the information seems to be sparse, contradictory, or wrong.

The most frequent references I found are to Isaiah 40:6:

The voice said, “Cry out!” And he said, “What shall I cry?”
“All flesh is grass, And all its loveliness is like the flower of the field.

As for man, his days are like grass;
As a flower of the field, so he flourishes.

where the claim is that "flower of the field" refers to the poppy plant.

Having seen abandoned fields with poppies blatantly appearing here and there at random, I can understand why people might think that.

But is there any historical or linguistic justification for the translation of כְּצִיץ הַשָּׂדֶה as poppy?

Tzitz ( צִ֔יץ ) refers to a blossomed bud - of any plant | frontlet on holy garments.

Yeshua (Jesus) of Nazareth explains the "Tzitz of the Field" by relating [it] to Human Fashion (not a poppy) - in Matthew 6:28-30 : "And why are you worried about clothing? Notice how the lilies of the field grow; they do not labor nor do they spin thread for cloth, 29 yet I say to you that not even Solomon in all his glory clothed himself like one of these. 30 But if God so clothes the grass of the field, which is alive today and tomorrow is thrown into the furnace, will He not much more clothe you? You of little faith!"

Spring flowers in the Holy Land 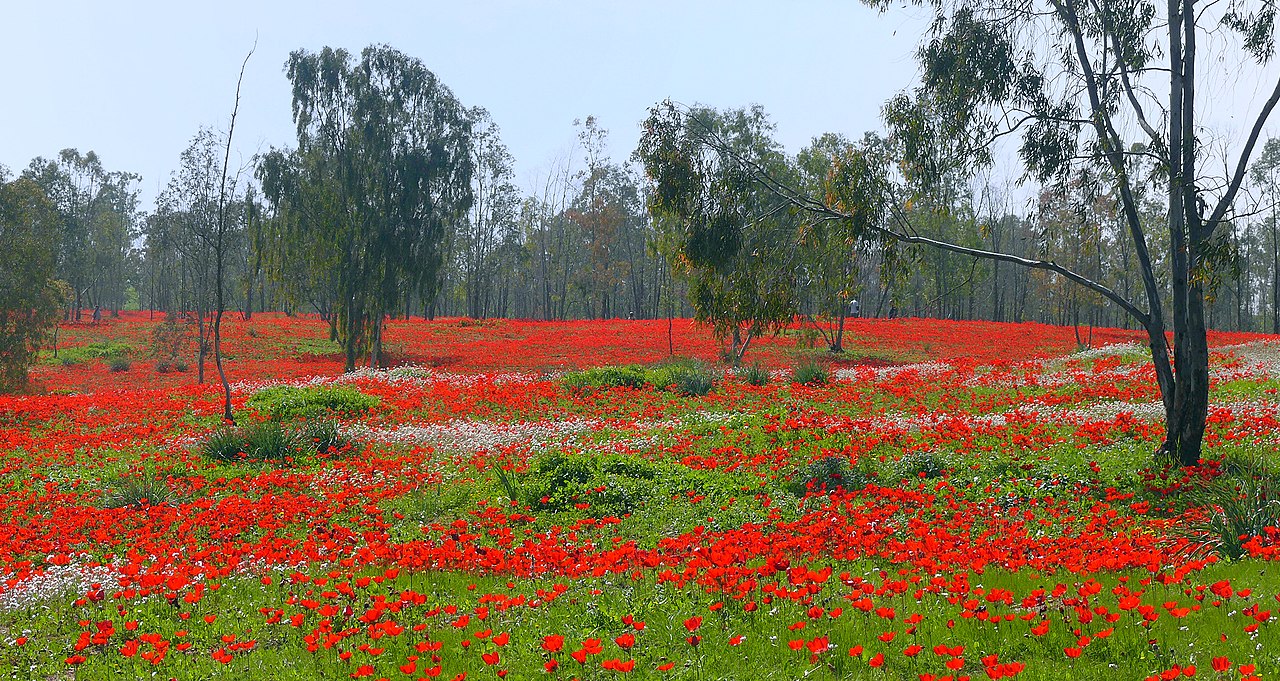 While they look like poppies, technically these are anemones. More specifically, Anemone coronaria which are also known as "poppy anemone" due to their resemblance to poppies (yet they are not poppies). You can read more about it in Wildflowers of Israel (and also see that "poppies" are not in the list).

Certain source associate the anemones with the ”Lilies of the field" mentioned in Matthew (6:28).

In Arabic it is called "SKAIK-A-NAAMANN" probably referring to a Canaanite god by that name, and mentioned also as a flower name bye the Prophet Isaiah (17:10) "Because thou hast forgotten the God of thy salvation, and hast not been mindful of the rock of thy strength, therefore shalt thou plant pleasant plants…" [In the Hebrew text –"pleasant plants is "NITEI NAAMANIM"].

that serves only as curiosity because there's no explicit word for anemone in the Bible -anemones were named by Carl Linnaeus only in 1753. Also, it's unclear as to how far anemones date back.

Anemones in the Bible?

Given that anemones are flowers that appear later in mid-winter and according to Song of Solomon 2:11-12

11 For behold, the winter is past,

The rain is over and gone.

12 The blossoms have already appeared in the land;

The time has arrived for pruning the vines,

And the voice of the turtledove has been heard in our land.

it could be that they are being described here. Still, in that same chapter, verse 1

“I am the rose of Sharon,

The lily of the valleys.”

the word used for "the rose" is חֲבַצֶּלֶת / ḥăḇaṣṣeleṯ which is used as well in Isaiah 35:1. Gesenius' Hebrew-Chaldee Lexicon points to narcissus 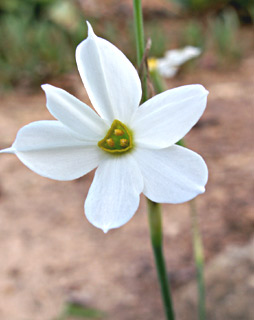 whose blooms appear also in that 2:11-12 time (just like other kinds of flowers in the Holy Land).

What about flowers of the field?

חִידָה's answer is good on this part. Still, I'd like to add that in the New Testament, the closer to "flowers of the field" is "flower of grass" used in both James 1:10 and 1 Peter 1:24. It's a combination of the greek anthos and chortos. This 1 Peter 1:24 is from Isaiah 40:6 so there's a potential linkage.

In addition to that, there's also a place where we read the pattern [specific flower + "of the field"]. More specifically,

28 And why take ye thought for raiment? Consider the lilies of the field, how they grow; they toil not, neither do they spin:

29 And yet I say unto you, That even Solomon in all his glory was not arrayed like one of these.

30 Wherefore, if God so clothe the grass of the field, which to day is, and to morrow is cast into the oven, shall he not much more clothe you, O ye of little faith?

According to Wildflowers of Israel, the only liliums are Lilium candidums. 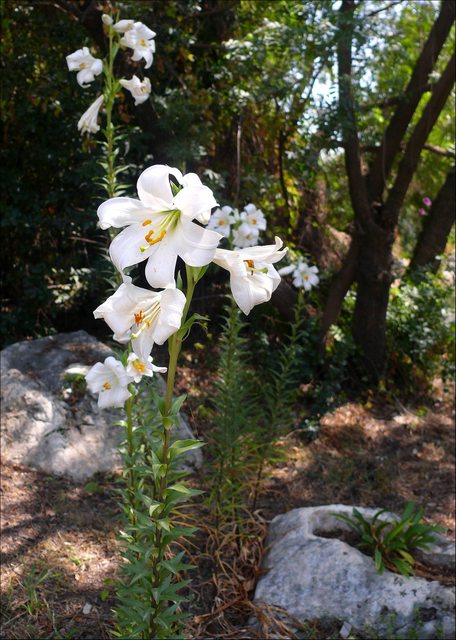 It has been cultivated since antiquity, for at least 3,000 years

So, it could be reasonable to take that in Matthew we're being revealed what the flowers of the field are lilies.

To answer your question, given the flowers in Israel it's extremely unlikely poppies are being considered at all in the Bible, unless one is speaking of "poppy anemones". The potential reference I found to them could also be speaking of another flower like narcissus.

In regards to "flowers of the field", it could be that they are lilies but that's just a possibility.

Not the answer you're looking for? Browse other questions tagged hebrew translation-philosophy or ask your own question.