Who are eunuchs of their mother's womb?

Who are those eunuchs "so born from their mother's womb". And are they the same as those spoken of in Isaiah?

For thus saith the LORD unto the eunuchs that keep my sabbaths, and choose [the things] that please me, and take hold of my covenant; Even unto them will I give in mine house and within my walls a place and a name better than of sons and of daughters: I will give them an everlasting name, that shall not be cut off.

literally bed-keeper or chamberlain, and not necessarily in all cases one who was mutilated, although the practice of employing such mutilated persons in Oriental courts was common ( 2 Kings 9:32 ; Esther 2:3 ). The law of Moses excluded them from the congregation ( Deuteronomy 23:1 ). They were common also among the Greeks and Romans. It is said that even to-day there are some in Rome who are employed in singing soprano in the Sistine Chapel. Three classes of eunuchs are mentioned in Matthew 19:12 .

Who are those eunuchs "so born from their mother's womb". And are they the same as those spoken of in Isaiah?

Eunuchs are those without the 'equipment' to have sexual relations, not to include those who call themselves homosexual. Eunuchs, because they lacked some necessary equipment to have sexual relations therefore they could not have sons or daughters, hence the Is. scripture where the Lord promises them something better than sons or daughters in His house.

Category 1 -those born eunuchs from their mother's womb. This means those men born without the necessary physical equipment to have sexual relations that will end in possible pregnancy.

Category 2 - Eunuchs made that way by men. This means some men, through acts of war, etc. were actually made so that they could not have sexual relations. This caused them to be placed as overseers in harems of kings, where they were trusted not to have relations with any of the women, because they actually couldn't. Making eunuchs of men captured in war, was not an uncommon practice in antiquity. Not for example, the Bible record of the slaughter of 'all the male children'. This is another way Kings conquered certain people groups, by eliminating generations of males, within that people group.

Category 3 - Men who made themselves eunuchs for the kingdom of heaven's sake. This means that some men like Paul, lived celibate lives, although he had the right to have a wife, (and Paul may have had a wife at one time, because of certain Jewish groups he wrote that he belonged to) Paul made himself 'like a eunuch' for the sake of the gospel. These words may also mean that some men actually 'castrated themselves' physically, for the sake of the kingdom of God.

Why do these passages on eunuchs NOT include people who call themselves homosexual? Homosexual could not be included in the eunuch category at all, because homosexuality is something that is expressly forbidden and called sin, by both the old and new testament, and does not involve dismemberment of any kind. Homosexual attraction is not castration.

Making a eunuch by birth, by others, or someone choosing to make themselves a 'eunuch' for the cause of Christ, does not include the sin of homosexuality in any way.

Homosexuality is always treated as wrong and against God in every way, by the old and especially the new testament, where even 'effiminancy', ie a male having female-like behaviours, speech or actions, is considered a similar sin to any homosexual behaviour itself. This is similar to the passage of 'whoever looks on a woman to lust, has already committed adultery in their heart'. A male acting in any effeminate way, this effiminancy was considered a deep sin, on an equal par with homosexual actions themselves.

The eunuch was an individual who was NOT heterosexual. That is, the eunuch did not engage in sexual intercourse with members of the opposite sex.

In this regard, eunuchs therefore were the custodians of the consorts of the king, because they (the eunuchs) were not a threat. For example, in the Book of Esther we find Hegai, one eunuch of King Ahasuerus, who was in charge of "the women" of the court (Esther 2:3), and then there was Shaashgaz, who was the eunuch in charge of "the concubines" of the king (Esther 2:14). There was yet another eunuch assigned to attend and serve Queen Esther, and his name was Hathach (Esther 4:5). In other words, these eunuchs were trusted agents of the king who were not to have any sexual relations with the king's female consorts.

The expectation of sexual purity here however was not based on an honor system of self-restraint, but on sexual castration: thus these eunuchs were not physically able to have sexual intercourse with the female consorts of the king. As gilded males, they were therefore "dried trees" that could produce no fruit or offspring (Isaiah 56:3 compared to Isaiah 56:5). Therefore they were not a threat to the king's harem because they were castrated males. So these are the eunuchs to whom Jesus was referring "who were made eunuchs by men," since their male genitalia are removed: thus their sexual identity is altered surgically.

In other words, the idea here is that sexual orientation is changed by the surgical removal of the genitalia. This removal of the genitalia does not make the eunuch homosexual (although there is ample literature that eunuchs were known as homosexuals in the ancient world -- for example, please click here), but the castration as a minimum erased any heterosexual identity of the male concerned.

Finally, there are those who have chosen to dedicate their sexuality to God (irrespective of sexual orientation), and therefore have chosen to abstain from any sexual behavior, and these are eunuchs for the Kingdom of God. The Apostle Paul advocated for such dedication in 1 Cor 7:7-9.

Before concluding, the mention of homosexuality is relevant, since eunuchs and homosexuality were not unrelated topics in the ancient world as noted in the previous paragraphs. That is, the idea here is that one can become a homosexual because of the acts of other people -- for example, the heterosexual who is castrated in order to be a eunuch may in fact later become a homosexual. That is, castration physically alters sexual identity. However, the idea of "castration" can also include the alteration of sexual identity through exposure to homosexual behavior (even though the male is not castrated physically). That is, a male who is born heterosexual can become homosexual because of the acts of other people (to include sexual abuse). Thus this male is made a "eunuch" by others (even through he is not physically castrated).

Conversely, one can be born with ambiguous genitalia and therefore will not be heterosexual, but "intersexual" (transgender). These people are born eunuchs, since any identity of heterosexuality is "castrated" by the physical deformity of their genitalia. These people are therefore born as eunuchs, because they are not heterosexuals in the medical physiological sense. The suggestion now is whether someone can be born homosexual, since sexual identity (as noted in the previous paragraph) does not necessarily depend on the mutilation of genitals. The following graph best depicts the parallels of these concepts. 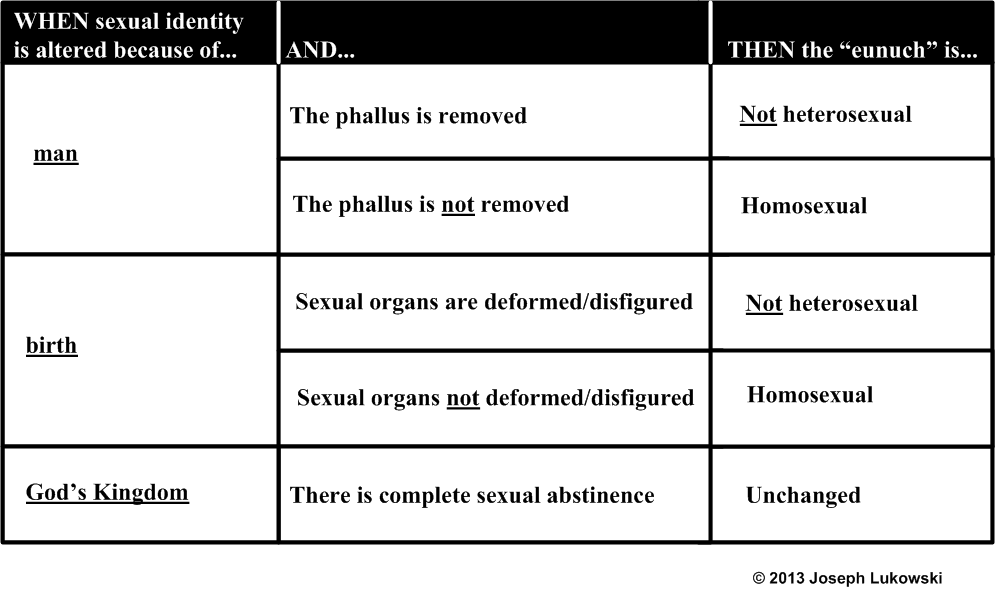 In summary, there are the eunuchs made by men, who are either castrated males (that are not heterosexual) or homosexuals, who are not castrated -- in either case, their sexual identity as heterosexuals is "cut away." Secondly there are also those who are born eunuchs, whose sexual orientation is ambiguous by birth -- that is, their sexual ambiguity may or may not depend on deformed genitalia. And finally, there are those who commit themselves to be eunuchs for the Kingdom of God, and who practice complete sexual abstinence, and who, like the apostle Paul (or even the castrated eunuchs in Isaiah 56:3-5), dedicate themselves to the service of God's glory.

An eunuch , in its basal sense, is a genetic male who is emasculated. The Greek word εὐνοῦχος itself literally means "emasculated man". To emasculate a man is to remove his maleness. Deuteronomy 23:1 tells us about two ways man is emasculated: (1) by castration, and (2) by mutilation.

"If a man's testicles are crushed or his penis is cut off, he may not be admitted to the assembly of the LORD.'' Deuteronomy 23:1 (NLT)

Man's masculinity or maleness in first century Judaism depends on one's external genitalia, by not having the entire male genitalia, eunuchs had been regarded as "neither male nor female" (Philo, Somn. 2.184).Thus, eunuchs are gender variant people. They defy the gender binary which is God's original design (Genesis 1:26-27). Perhaps, this is the reason why eunuchs have been banned from public worship in the Tanakh (cf. Leviticus 21:17-23; Deut 23:1).However, it seemed clear that Jesus was lifting the ban of eunuchs in Matthew 19:12.

Therefore, the eunuchs of their mother's womb (Matthew 19:12a) must be a person born without a male genitalia or with defects in it. In our time, these born eunuchs might be what we call today as intersex conditions. The closes medical condition that fits this biblical description is the 46, XY Intersex (a male with ambiguous genitalia).

On the other hand, it seems that these born eunuchs also included people that we know today as transsexuals since in first century Judaism eunuchs are feminized and in that time, Jews , notably Josephus (Ant 4.290-291) and Philo (Spec. Leg. 1.325) see their effeminacy as sinful. However, Jesus had a different view point. He did not condemn these gender variant people as sinful (Matthew 19:12a).

Since castration depletes one of hormones, one becomes sexually inactive or even totally loss sexual interest to anyone (source). Therefore, natural eunuchism in Matthew 19:12 can refer to asexuality.

Some of the born eunuchs can be regarded to what we know today as homosexuals (not the practice but the orientation). This view point is held by Dr. Rob Ganon , an Evangelical and John J. McNeil, a Catholic (source).

Not the answer you're looking for? Browse other questions tagged matthew isaiah or ask your own question.