“But pray that your flight may not be in the winter, or on a sabbath…” - Matt, 24:20. Could this line be in reference to a single day?

It has often been said, by many a theologian, that Jesus' words, as portrayed in Matt, 24:15-22, to take just part of the "Olivet Discourses" (for the moment), imply a dual prophecy, involving Great Tribulation which was to fall upon initially the Jewish nation, at the time of the 1st Jewish - Roman War (66 AD - 73 AD) and then to fall upon secondly, at some future time, also to involve Great Tribulation, all nations, which many a religion/theologist, rightly or wrongly, believe will again involve another 7 year period.

We know from the historical record that both Jew and Christian alike, particularly before 70 AD, fled Jerusalem to escape the pending Roman onslaughts, not to mention infighting amongst themselves (see Josephus' historical record, entitled "Wars of the Jews"). One would hope however, that they did not have to flee in the winter, or on a sabbath.

If we move forward now to the above verse and even take it in conjunction with Rev, 16: 16, which incorporates the one time use of HAR - MAGEDON, a still future event, could we possibly be talking about one single day, which for all our prayerful sakes, one would hope does not fall in the winter, or on a sabbath.....

The above are just 3 references to the "Thief in the night" scenario, when Jesus is to come suddenly, after the so called "RAPTURE" has already taken place for the remainder of the "ELECT". Those remaining on earth will be a mixture of other believers in the "RANSOM SACRIFICE" and non-believers. Jesus will then thresh the nations lined up against the symbolic Israel -see Micah 4:11-13. The question here then, should be as to how long will this threshing take. If mortal beings were doing the threshing, it would obviously take a long time. But, as Jesus and his heavenly following will be doing the threshing, could it not be possible that it be done in one day ?? Compare 2 Kings 19:35....

First century AD, pre Gentile nations, sabbath ramifications aside. When it comes to having to preserve one's well being, with a view to flight, in this present day's age, we can be assured that sabbath day restrictions, at least among the Gentile nations, will hardly be prohibitive, particularly as the modern day sabbath, being Sunday, in most instances, bears no relation to God's intended day, i.e. Saturday. It will therefore be like most any other day.

So what then are we to make of, V. 21, assuming for the moment, for argument's sake, that winter is not going to to be a major hindrance in the - most probably short lived (not even a season) - tribulation, pre 2nd Advent, factor - see Matt, 24:22.

If Har-Magedon, itself, is to be a single day event, to be led by the "KING OF KINGS, AND LORD OF LORDS" - Rev, 19:16, then how more ironic could it be, than to be on a Saturday. If GOD has already decided that Saturday is to be the day, then his anger may well be all the more compelling, and that, when all is said and done, may be the true reason why we should pray for "it" not to happen on this day of all days....

Let me place this passage of Matt 20:24 in context. The synoptic Gospels all have apocalyptic sections: Matt 24, Mark 13, Luke 21. If this material is combined, it forms an interesting structure which is effectively Jesus’ commentary on the Book of Daniel.

This material in the Synoptic Apocalypse provides an inspired overview of the “Last Days” and is a key to understanding the other apocalyptic Biblical literature, especially the seven seals of Rev 6 which provide a literary structural parallel.

Note the parallel of “eternal punishment” with 2 Thess 1:8-10 and Jude 7, 8. Thus, Jesus’ final sermon contains, in at least embryo form, all that needs to be known about the “last days”, the time between His first and second advents.

Note that the events that Jesus describes are clearly those surrounding the destruction of Jerusalem in 70 AD. However, there are some that clearly allude to the second advent as well such as "The sign of Son of Man in heaven" (Matt 24:30) when Jesus is seen arriving in the clouds of heaven to gather the saints. This is consistent with the disciples' dual question (Matt 24:2, 3) about the destruction of Jerusalem and the "end of the age".

The material of Jesus' synoptic apocalypse is contained within the section of the Abomination of Desolation, Matt 24:15-22, when Christians were told to escape before the coming doom.

Daniel 12:11 (NASB)...What is implied by the word "ta-med". Can we rightfully add the word "sacrifice" to the word "regular"

The literature on the battle of Armageddon is huge so I will be brief:

I am not sure this answers the question but it may be helpful in providing a background framework for the question.

The duration of the "flight" of which he speaks could have been a matter of hours or minutes. The occasion to which he refers is the escape from Jerusalem before the siege of Titus' armies c. 70 AD/CE made it impossible to leave the city.:

[Luk 21:20-27 NLT] (20) "And when you see Jerusalem surrounded by armies, then you will know that the time of its destruction has arrived. (21) Then those in Judea must flee to the hills. Those in Jerusalem must get out, and those out in the country should not return to the city. (22) For those will be days of God's vengeance, and the prophetic words of the Scriptures will be fulfilled. (23) How terrible it will be for pregnant women and for nursing mothers in those days. For there will be disaster in the land and great anger against this people. (24) They will be killed by the sword or sent away as captives to all the nations of the world. And Jerusalem will be trampled down by the Gentiles until the period of the Gentiles comes to an end. (25) "And there will be strange signs in the sun, moon, and stars. And here on earth the nations will be in turmoil, perplexed by the roaring seas and strange tides. (26) People will be terrified at what they see coming upon the earth, for the powers in the heavens will be shaken. (27) Then everyone will see the Son of Man coming on a cloud with power and great glory.

This explains the great importance of sleeping clothed, having a go-bag nearby, and if one happens to be out in the field when they spot the Roman troops, not to return to the city to get their stuff:

[Luk 17:26-37 NLT] (26) "When the Son of Man returns, it will be like it was in Noah's day. (27) In those days, the people enjoyed banquets and parties and weddings right up to the time Noah entered his boat and the flood came and destroyed them all. (28) "And the world will be as it was in the days of Lot. People went about their daily business--eating and drinking, buying and selling, farming and building-- (29) until the morning Lot left Sodom. Then fire and burning sulfur rained down from heaven and destroyed them all. (30) Yes, it will be 'business as usual' right up to the day when the Son of Man is revealed. (31) On that day a person out on the deck of a roof must not go down into the house to pack. A person out in the field must not return home. (32) Remember what happened to Lot's wife! (33) If you cling to your life, you will lose it, and if you let your life go, you will save it. (34) That night two people will be asleep in one bed; one will be taken, the other left. (35) Two women will be grinding flour together at the mill; one will be taken, the other left." (36) [Some Greek manuscripts exclude this verse. The NLT related footnote for 17:35 states: 17:35 Some manuscripts add verse 36, Two men will be working in the field; one will be taken, the other left. Compare Matt 24:40.] (37) "Where will this happen, Lord?" the disciples asked. Jesus replied, "Just as the gathering of vultures shows there is a carcass nearby, so these signs indicate that the end is near."

[Luk 21:34-36 NLT] (34) "Watch out! Don't let your hearts be dulled by carousing and drunkenness, and by the worries of this life. Don't let that day catch you unaware, (35) like a trap. For that day will come upon everyone living on the earth. (36) Keep alert at all times. And pray that you might be strong enough to escape these coming horrors and stand before the Son of Man." 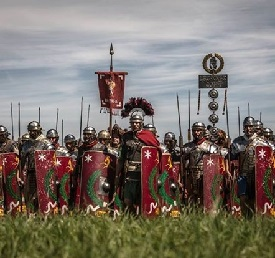 The difficulty of being a refugee, of course, lasted longer than that single hour.

Armageddon is a location, not an event. It was a convenient place for troops to assemble.

I think Matthew 24:20 is saying, "pray your flight is not in the winter months or in bad weather because it will slow down your escape. It will also be slowed down if it's on the Sabbath day because here again it is not enough time to get them out of danger being in one place worshipping.

Going back to Matthew 24:3 the disciples ask Jesus, "Tell us when will these things be, and what will be the sign of your coming, AND THE END OF THE WORLD/AGE. From verses 4-14 Jesus explains what to expect which by the way is happening today.

The tip off is verse 15, "Therefore when you see the Abomination of Desolation which was spoken of through Daniel the prophet, standing in the holy place, let the reader comprehend what is meant by these words.

It's time to get out of dodge. This is in my opinion the great tribulation period which I personally believe we will go through. I base this on Matthew 24:29. "But immediately after the tribulation of those days The Sun will be darkened, and the moon will not give its light, and the stars will fall from the sky, and powers of the heavens will be shaken."

Verse 30, "and then the sign of the Son of Man will appear in the sky, and then all the tribes of the earth will mourn, and they will see the Son of Man coming on the clouds of the sky with power and great glory."

Verse 31, "And He will send forth His angels with a great trumpet and they will gather together His elect from the four winds, from one end of the sky to the other."

Not the answer you're looking for? Browse other questions tagged matthew revelation apocalyptic prophecy or ask your own question.

6
Matthew 27:62: “the day that followed the day of the preparation” - Why not call Sabbath a Sabbath?
5
Is the “7th seal” opened before the “6th seal” book of Revelation
1
Is the second horseman in Revelation 6:3-4 Nebuchanezzar king of Babylon?
3
Does the Sixth Seal in Revelation 6:12 refer to the Medo-Persian Empire?
0
In Matthew 24:20 to what “flight” does Jesus refer at the end of the age?
12
Is Jesus implying that He expects his disciples to be Sabbath-keepers in Matthew 24:20?
3
In Matthew 12:10-13, why does Jesus equate a withered (ξηράν) hand (χεῖρα) as a pit (βόθυνον) to be saved from?
8
Is there a contradiction in being told by disciples the hidden (disciple only) meaning behind parables for the masses, even though we are the masses?
1
Was the prophecy of Zechariah 14: 4 already fulfilled or is it yet to come?