What evidence is there that boiling a kid in its mother's milk (Exodus 23:19) was a pagan practice?

In Exodus 23:19 (KJV), Jehovah tells the Israelites, "Thou shalt not seethe a kid in his mother's milk." Searching online for a possible meaning, many suggestions are given, the most compelling of which I find to be that boiling a kid in it's mother's milk and sprinkling the resulting potion on fields was a ritual from some pagan fertility cult. However, I cannot find where this idea originated. I would like to know whether this is simply the result of speculation, or whether there is evidence that such a ritual existed or was common.

The closest thing I can find to a source is footnote F9 on this website, which references Gregory's Notes & Observ. c. 19. p. 97, 98. I searched for this work and found a book titled Gregorii Opuscula, or, Notes & observations upon some passages of Scripture : with other learned tracts (published 1650), of which I found a PDF, which is a collection of works (fewer than 19), none of which is titled Notes & Observations. Pages 97-98 discuss Matthew 2:16 and the Jewish demon Lilith.

Can anyone help me find the book referred to as Gregory's Notes & Observ. in the above citation? Else, can anyone guide me to another source of the idea that Exodus 23:19 refers to a pagan ritual?

In the book The Bible and Archaeology by Sir Frederic Kenyon, he does give some historical information about seething or boiling a kid in its mother milk: 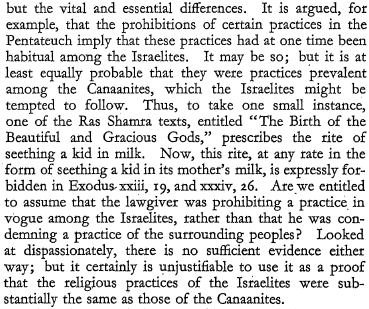 [The original question "What is the significance of the command found in Exodus 23:19, 'You must not boil a kid in its mother’s milk'?" was in a Watchtower from 1965 and it mentions the book by Sir Kenyon.

I was able to find a pdf file located at Birzeit University. Searching through the file, the information is located on page 162 (183 of the pdf) with the reference in the screenshot above.]

There have been so many attempts to show this is a Cannanite myth, and whenever I've tried to track things down, it's never been verified. This is true in this case as well. In the entire Ugaritic corpus "kid/goat" and "milk" do not occur in the same stanza or poem. Here is the portion of the poem supposedly containing the description of a ritual in which a kid is seethed in his mother's milk:

I apologize for the lengthy quotation, but the only way to squash these notions or at least show how dubious they are is to present the actual text.

For those of you with the logos package, you can buy the book and investigate yourselves, it's part of the Ugaritic language package, and I've searched through the entire databank looking for "goat", "kid", "milk" and have found nothing to support this notion, yet it keeps coming up. I can only surmise that the default explanation for anything in Leviticus is that it was being done by native tribes that the Israelites were commanded to be separate from. This, I believe, is poor exegetical practice.

Not the answer you're looking for? Browse other questions tagged exodus history cultural-analysis reference-request or ask your own question.

30
Why does Adonai instruct us to not prepare a goat in its mother's milk?
14
What evidence exists that supports the understanding of the Exodus as a deliverance metanarrative and not as a historical narrative?
4
Is there archaeological evidence to suggest that the locust plague in Exodus 10:15 spread over a larger area?
5
What evidence exists to show that the Galatians could understand Greek?
4
What type of plant was the bush of Exodus 3:2?
2
Exodus 16:34 - Does it state that there were more than just the two tablets of testimony in the Ark of the Covenant?
2
Is there any evidence that 'knei bosem' is cannabis or ganja?
8
What was the Roman practice for disposing of dead bodies?
3
In Exodus 32:6, what was the nature of the pagan revelry of the Israelites?
2
In 2 Samuel 21:8-10 was Rizpah’s use of the sackcloth a sign that the land had repented of its sin?