31 And thou shalt make a candlestick of pure gold: of beaten work shall the candlestick be made: his shaft, and his branches, his bowls, his knops, and his flowers, shall be of the same.

34 And in the candlesticks shall be four bowls made like unto almonds, with their knops and their flowers.

36 Their knops and their branches shall be of the same: all it shall be one beaten work of pure gold.

37 And thou shalt make the seven lamps thereof: and they shall light the lamps thereof, that they may give light over against it.

A common feature of the observance of Hanukkah, the menorah, in most modern representations and festive uses among practicing Jews and some Christians, features an additional candle called a shammash.

When I read of the description given to the menorah is Exodus, I do not see any such "attendant" candle mentioned.

My question then, is this:

Is there anything in the Hebrew text, or the Greek text of the LXX to suggest that the menorah always featured the shammash or was the idea of the shammash a much later feature, a tradition that followed some time after its creation?

The closest, possible answer I could find is from an image of the menorah from Titus' Arch, but I am not inclined to think that a 1st-century carving in the city of Rome automatically qualifies as proof of anything, one way or the other, as it pertains to the question at hand. 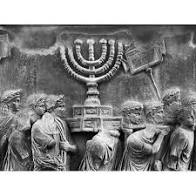 The candles used on Hanukkah may be arranged on a nine-pronged menorah, where the middle one is the shammash. The advantage of the additional candle is so there is no need to light from one candle to another.

The Temple menorah had seven candles, not nine. In the Temple there was no need for a shammash, because the priest would simply light from one candle to another (Leviticus 24:2; Numbers 8:1-3); or, if all the candles had burnt out, from the altar, which was always burning (Leviticus 6:1-6) This is how the Mishnah (Tamid 6:1) describes the lighting process.

The Shamash ( הַשָּׁמַ֖שׁ ) of Chanukah:

[52] Early in the morning on the twenty-fifth day of the ninth month, which is the month of [Kislev], in the one hundred and forty-eighth year, [53] they rose and offered sacrifice, as the law directs, on the new altar of burnt offering which they had built. [54] At the very season and on the very day that the Gentiles had profaned it, it was dedicated with songs and harps and lutes and cymbals. [55] All the people fell on their faces and worshiped and blessed Heaven, who had prospered them. [56] So they celebrated the dedication of the altar for eight days, and offered burnt offerings with gladness; they offered a sacrifice of deliverance and praise. [57] They decorated the front of the temple with golden crowns and small shields; they restored the gates and the chambers for the priests, and furnished them with doors. [58] There was very great gladness among the people, and the reproach of the Gentiles was removed. [59] Then Judas and his brothers and all the assembly of Israel determined that every year at that season the days of the dedication of the altar should be observed with gladness and joy for eight days, beginning with the twenty-fifth day of the month of [Kislev].

The word Chanukah originally comes from Bamidbar / Numbers 7 when Israel celebrated the 12-day Dedication (Chanukat, חֲנֻכַּ֣ת) of the Tabernacle altar.

These serve quite different symbolic functions in Jewish iconography.

Menorah is the Hebrew word for lamp. A living room lamp with a light bulb is called a menorah in modern Hebrew. The menorah in the Tabernacle and Temple had seven oil lamps. The menorah at Hanukkah has nine candles. The connection between the two is they are both lamps, thus called menorah.

Scripture never refers to a specific branch on the 7 candle stick menorah as a "shamash". But Isaiah does refer to the Messiah as the "servant branch". There are I believe 9 seperate words in tje hebrew la language that mean "branch". Only one of these words refers to what the prophecy of the coming Measiah would be. In the new testament, Messiah is refered to a coming from Nazareth. According to the haters and doubters, they say that there was no prophecy in the old testament that the Messiah would come from Zazareth. But what they fail to realize, is the word "branch" used in the menorah, is the hebrew word "natzar", which is where the word "natzarETH" derives from.
Shamash can mean "servant" in Hebrew. The servant candle on the true 7 branch menorah was the "natzer" branch. Or the Natzerem branch, which came from NatrarETH.

The commandment to build a Menorah in the Temple (Tabernacle) is biblical and found in Ex25 as noted. The commandment to light a Chanukah menorah is rabbinic. There is no rabbinic obligation to light a Shamash. Rather there is a rabbinic obligation to light at least one light each of 8 nights. However, the custom has developed that 1 light is lit on night 1, 2 on night 2, etc. There is no further Rabbinic requirement that the Chanukah menorah have a shamash. In other words, if a person on the 5th night of Chanukah lit 5 candles he or she has fulfilled his or her obligation (provided all criteria are met). The custom of having a shamash candle, as several respondents note, is to comply with the rabbinic obligation that the chanukah lights should not be used for secular purposes like reading but only serve a commmemorative purpose. Thus the Shamash candle is simply a convenience so that if one benefits from the Chanukah lights they are benefitting from the shamash which is permissable.

Not the answer you're looking for? Browse other questions tagged hebrew exodus septuagint 1-maccabees or ask your own question.

5
Are the rings for carrying the incense altar pure gold?
4
How was the Tabernacle built?
9
What's behind the difference between the Greek and Hebrew of Exodus 21?
2
In 2 Kings 13:18, did Joash shoot three arrows or beat them against the ground by hand?
3
What did the almonds on the Menorah (Lamp of the Presence) represent in Exodus 37:20
8
In Psalm 82:1 who are in the "congregation" and who are the "gods"?
3
Did the menorah burn 24/7?
2
How is Malachi 1:11 to be understood?
3
Why does the LXX occcassionally have "fear God" instead of "fear the Lord" in Proverbs?
1
Is the "ark of wood" the ark of the covenant?