Was Samuel a descendant of Aaron?

1 Samuel 16:3 Invite Jesse to the sacrifice, and I will show you what to do. You are to anoint for me the one I indicate." 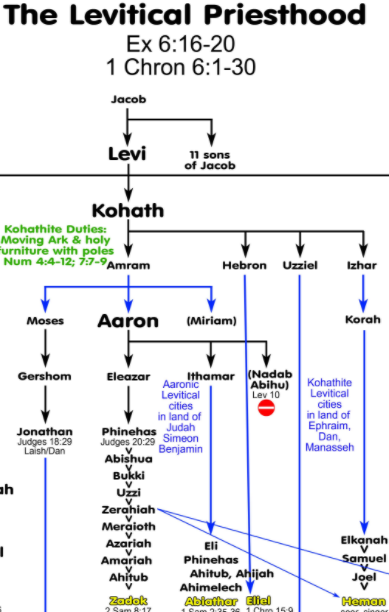 1 Samuel 1:1 There was a certain man from Ramathaim, a Zuphite from the hill country of Ephraim, whose name was Elkanah son of Jeroham, the son of Elihu, the son of Tohu, the son of Zuph, an Ephraimite.

Elkanah was a Levite living in the territory of Ephraim.

1 Samuel 16:3 Invite Jesse to the sacrifice, and I will show you what to do. You are to anoint for me the one I indicate.

Samuel was functioning as a prophet, not as a Levite.

Now there was a man named Elkanah who was from Ramathaim-zophima in the hill country of Ephraim. He was the son of Jeroham, the son of Elihu, the son of Tohu, the son of Zuph, an Ephraimite. He had two wives, one named Hannah and the other Peninnah. And Peninnah had children, but Hannah had none.

Note that the prophet Samuel's father, Elkanah, was from the tribe of Ephraim which was different from the tribe of Levi. However, the genealogy is complicated by the fact that the Levites live throughout the land and their people often intermarried. 1 Chronicles throws more light on this question as from the Cambridge commentary -

Elkanah] In 1 Chronicles 6:22-28; 1 Chronicles 6:33-38, Samuel’s descent from Kohath the son of Levi is given at length. Shemuel in 1 Chronicles 6:33 is the Hebrew form of the name for which the E. V. usually substitutes the Latinized form Samuel. The discrepancies in these genealogies may be partly due to corruptions of the text, partly to the same individuals bearing different, though in some cases synonymous, names.

an Ephrathite] The Levite Elkanah is called an Ephrathite, i.e. Ephraimite, because his family had originally belonged to the Kohathite settlements in the territory of Ephraim (Joshua 21:20). It is suggested in the Speaker’s Commentary, that as Salmon, the 7th from Judah, entered Canaan with Joshua, Zuph, who was the 7th from Levi, according to the genealogy in 1 Chr., may very probably have lived at the time of the settlement of the land. The genealogy would naturally stop with the first settler in Canaan, who gave his name to “the land of Zuph” (1 Samuel 9:5). If so, we must suppose that he at once migrated from the residence assigned him in the tribe of Ephraim.

10
Did Saul intend to offer a peace offering in 1st Samuel 13?
5
Is Saul's insult intended to be incoherent?
1
Why did Samuel think that Saul would kill him given that all of Saul's recorded erratic behavior seems to have happened later?
3
How did Saul find out that David had been anointed to be king?
3
To judge by looks and appearances or Not. Choosing King David. (1 Samuel 16:7-14)
2
Which is correct between NLT and KJV of 1 Samuel 16:12
1
Why did Saul ask David for the name of his father in 1 Samuel 17:58?
2
Did Samuel actually see David in person when he consecrated him in 1 Samuel 16:5?
1
1 Samuel 15 and the fulfillment of Numbers 24
3
How to understand 1 Samuel 16:7 in light of Leviticus 21:16-20?