Does John 21:20-24 indicate that the original author of the Fourth Gospel was dead?

Early tradition says that the author lived on for some time after the composition, while many post-eighteenth century critical scholars seem to take for granted that the author (if it even is the disciple whom Jesus loved) had died before the completion of its final form - largely, it seems, based on the text of John 21:20-24, which reads:

Peter turned and saw that the disciple whom Jesus loved was following them. (This was the one who had leaned back against Jesus at the supper and had said, “Lord, who is going to betray you?”) When Peter saw him, he asked, “Lord, what about him?”

This is the disciple who testifies to these things and who wrote them down. We know that his testimony is true.

I realize a host of other considerations must go into any determination of authorship, but my present concern is whether it should be inferred from this text that the original author had since died?

I think it's a very strong possibility but it's not the only explanation.

John 21 does appear to be a post script to John's gospel. John 20:30-31 is certainly a fitting conclusion to the gospel proper.

30 Jesus performed many other signs in the presence of his disciples, which are not recorded in this book. 31 But these are written that you may believe that Jesus is the Messiah, the Son of God, and that by believing you may have life in his name.

Other issues also point to John 21 being a later addition to the fourth gospel. For instance Jesus' three questions to Peter, "do love me," appear to point to an original knowledge of the Gospel apart from John 21. In John 21, Jesus' uses the word ἀγαπάω (agape) for love twice followed by φιλέω (phileō) in his questions to Peter. These questions are followed by a discussion between Jesus and Peter about the disciple whom Jesus loved (21:20-22). And interestingly enough this is the same pattern we find used in the beloved disciple three appearances before John 20:30-31.

13:23 One of them, the disciple whom Jesus loved (ἀγαπάω agapaō), was reclining next to him.

19:26 When Jesus saw his mother there, and the disciple whom he loved (ἀγαπάω agapaō) standing nearby, he said to her, “Woman,[b] here is your son,”

20:2 So she came running to Simon Peter and the other disciple, the one Jesus loved (φιλέω phileō), and said, “They have taken the Lord out of the tomb, and we don’t know where they have put him!”

In fact much of John 21 focus' on Peter and his relationship to the disciple whom Jesus loved. It has less to do with Jesus. This is certainly evident in in the three and possibly four appearances of the disciple before John 20:30-31 but its certainly more pronounced in this last chapter.

With the addition of John 21 this apparently implicit connection is not as clear. This disciple is mentioned twice in this later chapter (21:7, 21:20) which dilutes the three appearances in the Gospel's main body. But if John's gospel had been known first without chapter 21 then Jesus' three questions to Peter when the chapter was later added would most certainly have been associated with the first three appearances of the Beloved disciple.

The author of John 21 also wants to correct a faulty belief about the lifespan of the "disciple whom Jesus loved, who we are told subsequently is the author of the fourth gospel.

But with that said. There is an allusion to the ending of Ecclesiastes here. John may simply be making an intentional allusion. Robert Kashow has recently laid these comparisons out in his article Traces of Ecclesiastes in the Gospel of John: An Overlooked Background and A Theological Dialectic. Note the similarities in the way the two books end. 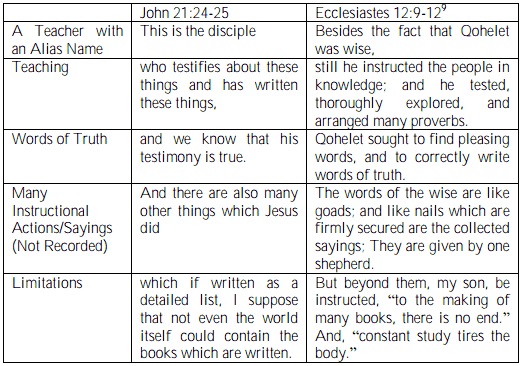 Short Answer: It really depends on what presuppositions you embrace. But it is certainly not clear that the passage requires John to already be dead.

Presuppositions play a huge role in such debates. There are two main groups in this debate, and the division between the two is based largely on their presuppositions. (See here for an excellent treatment of these issues.)

Group A prioritizes the inspired text and church tradition over historical criticism. This group attributes the Gospel of John to John for a variety of reasons, including literary presentation of the implied author, and church tradition. This group might use the passage in question as evidence that John did write the passage, and perhaps even that the Spirit was involved in its production.

Group B follows the tradition of the Enlightenment, presupposes naturalism (in general), and tends to reject the idea of supernatural intervention, legitimate predictive prophecy, and the credibility of church tradition. This group is skeptical of the reliability of John's historical claims, the idea that John wrote the Gospel at all, and the possibility of miracles, to name a few things. This group would tend to use the passage in question as proof that John could not have written it.

The question is really: which group are you trying to be a part of? Personally I can identify more with the approach of Group A. I would point out that John is merely clarifying the misunderstanding of the disciples -- he is not even making a claim one way or the other. John showcases Jesus as a misunderstood man all throughout his Gospel, so this is par for the course. So, in summary, I don't see any reason to think that this is proof that John didn't write it.

John 21:20-24 does indeed indicate that the original author of the Fourth Gospel was utterly and completely dead... to the rudiments of this world (Colossians 2:20), such as pride, for instance (Matthew 11:29). The very first thing he does is to consistently obliterate his very name. However, since he did unfortunately witness firsthand certain defining events marking the dawn of Christianity, he cannot erase his own person completely, lest the very Gospel of Christ might be harmed in the process — notice his recurring theme of constantly making recourse to credible witnesses, and defending the trustworthiness of their testimony:

So he does the next best thing, which is concealing his identity under a meaningful and suggestive moniker, so as not to thereby lessen his credibility or diminish the relevance of his account. Then he further covers his tracks by providing his readers with a patsy or a scapegoat, pointing to poor Lazarus (no pun intended) as a possible or even plausible alternative (11:3, 5, 36), especially in light of the latter's resurrection (21:20-23). Nevertheless, now with Damocles' sword of immortality hanging swiftly over his head, he still has just one more plot-hole to fix, that of his own public perception, which he ever so diligently does, by carefully cherry-picking, with outright Talmudic precision, certain minute details of Christ's specific wording, as if the ever-growing rumors and increasing suspicion which (rather rightfully) emerged among the followers, in light of his Methuselahic age (especially when compared to that of the other Apostles, which were all long gone by the time he penned his Gospel), were some frivolous trifle, to be peripherally dismissed by parenthetical remarks, like it's all just another Tuesday walk in the park... But, as with all those who try to hide themselves out of humility (Matthew 6:1-6), and whom God later reveals as lights of the world, so John, as a city set upon a hill (Matthew 5:14-16), could not hide his sanctity, or his authorship, and was ultimately shown to be a true fisher of men (Matthew 4:19; Mark 1:17).

Not the answer you're looking for? Browse other questions tagged john authorship or ask your own question.

13
Was the Beloved Disciple the author of the Fourth Gospel?
13
When did Joseph, Jesus's father, die?
3
Does John 21:24-25 indicate John didn't write this Gospel?
3
The mention of the σουδάριον in the fourth gospel
9
Why does John describe himself or another disciple "Jesus loved" using phileo love ἐφίλει?
7
What did the disciple whom Jesus loved (ἐφίλει) believe?
1
When John wrote the other disciple whom Jesus loved (John 20:2), does this single him out from the other disciples?
7
Was Papias the scribe who wrote the Gospel of John?
2
Who are the "we" and "I" at the end of the gospel of John?