"And this is the will of him who sent me, that I should lose nothing of all that he has given me, but raise [anasteso] it up on the last day" ESV.

"anasteso" comes four times in John chapter 6. If one says the same thing 4 times but on one of those occasions say it differently then presumably it is deliberate and to make a particular point.

According to the English-Greek Reverse Interlinear N.T. ESV, the first time, in verse 39, anasteso is aorist, subjunctive, active-"raise".

What point is being made by the first of the four being different?

The word is made up of ana - a prefix meaning up (from below) and a prolonged form of staō meaning to stand. Depending on who is performing the verb and in what sense will determine the best translation. In this case, it is being performed to the object so "to raise up" is the correct English not "to stand up".

In the jussive Subjunctive Mood (expressing a command for the desired result) the English equivalent is "should". This is the mood in which the Father has expressed His will, hence KJV translates v 39.

I should raise it up again

It simply states the express desire and instruction of the Father in verse 39. And notice that "μη απολεσω" is also subjunctive, which translates to "should not perish".

The indicative mood presents the action or the event as something real or certain, so if performed by the subject on the object the English equivalent appropriate here is: "will"

I will raise him up (KJV)

So, no, it is not to make a certain point but to indicate the Mood: The will of the Father and the sure (future) actions of the Son.

I am curious to look into the English use of "again" in KJV when itis not translating the specific Greek word meaning to repeat. In this sense, it appears to me that it is used to indicate a sense of returning rather than repeating:

So I doubt that the "again" in the KJV is part of the verb morphology.

The idea of a last day resurrection of the righteous as discussed in John 6 (and introduced in John 5) sets out four things all surrounding the verb ἀνίστημι (anistémi) = to raise up.

We can observe several things about this passage:

Thus, ἀνίστημι (anistémi) in V39 serves a different semantic and linguistic function from those in V40, V44, & V54.

The last day is the key:

Martha said to him, “I know that he will rise again in the resurrection on the last day.” (John 11:24, ESV)

You should ask this question to an Orthodox Christian. This is the verb they use when they say, "Jesus Christ has risen." Also for Coptic Christians.

The senses of the verb: 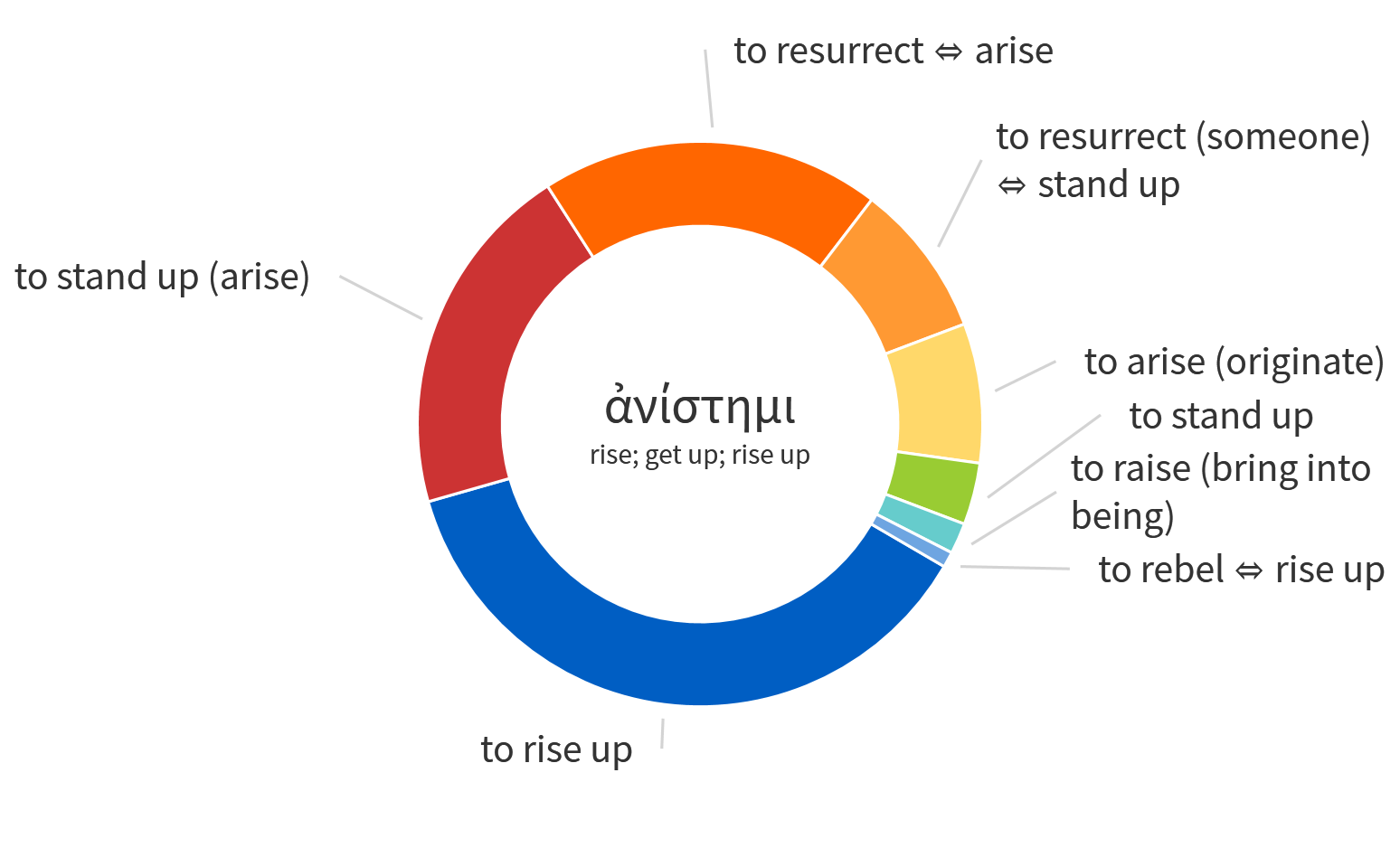 In 35, eating/drinking the Bread/Drink (understood) of life is in parallel to believing. Likewise, coming (37) to the Bread for life is what those Galileans were NOT doing, believing (36). In 37, "All" (pan = the whole group--neuter--not part of the group) that the Father gives the Son "will come" (indicative). The question is, what is the Son going to do with his gifts from the Father? The Father's will is that the Son *should not lose" (subjunctive) of the whole group he has given to the Son, but *should raise" (subjunctive) it up on the last day (39). Further (40a) it is the Father's will that "pas", everyone making up the whole group, everyone looking to the Son and believing (Is this reminiscent of 3:14-16?) "should have" (subjunctive) eternal life (which, indeed, a person "has" (indicative) upon believing, according to 47, but let me not jump ahead).

This is the Father's will, but is it going to happen? Jesus answers that question in two stages. Firstly (38) he, the Son, came here "to do" (not to attempt to do) the will of his Father (38). So will he do what he came to do, or should we put a question mark over his obedience to the Father? Will he fulfill the Father's will? Jesus, himself, leaves us in no doubt: "And I will raise him up (indicative) on the last day" (40b). The Father's will, in these verses, is expressed in the subjunctive mood; the Son's obedience is expressed in the indicative. Accordingly, the outcome for the auton (him) who comes to (believes in) Jesus for life (44) is "I will raise him up" (indicative), and the outcome for those who for eternal life look outside of themselves to the sacrifice of Christ (54) is "I will raise him up" (indicative - no 'should'/'would'/'might' language here, but just the language of certainty, since the Son can be trusted to see to the Father's will.

Whatever might be said about the qualities of eternal life (zōē aiōnios, the life pertaining to "the age"--the coming age), here we have Jesus' own answer to the question of its duration. It lasts at least until the resurrection. By definition it is as lasting as the new age itself; it is as enduring as the life of the new earth where death will have been defeated. Everyone given eternal life when he believes will be gloriously raised at the eschaton.

Not the answer you're looking for? Browse other questions tagged greek john word-study grammar or ask your own question.