Revelation 13:8a All inhabitants of the earth will worship the beast. Literally all?

Revelation 13:8a All inhabitants of the earth will worship the beast

Does this mean that no believers are alive at this occasion?

The phrase in Revelation "Inhabiters/dwellers of the earth" occurs 11 times. The Greek phrase is: κατοικοῦντας ἐπὶ τῆς γῆς (or similar). The verb κατοικέω (the verb to dwell or inhabit) is interesting in its own right as this occurs 13 times in Revelation as I document below in bold:

It is immediately clear that "those who dwell on the earth" is consistently used to describe the wicked. Such "dwellers on the earth" live where Satan's throne is, have three woes pronounced against them, gloat because the righteous fall, they worship the beast and make an blasphemous image to the beast, etc.

Therefore, in answer to the OP's question, ALL the inhabitants of the earth, ie, the wicked, will worship the beast.

Note the verb to dwell, κατοικέω, acts as a direct literary counterpoint to the verb, σκηνόω, which always describes the dwelling (literally "tenting") of God or the dwelling of man with God (Rev 7:15, 12:12, 13:6, 21:3). But that is another discussion.

There is a 1st-century cultural aspect to Revelation 13 and this passage in particular.

The Roman emperors (Augustus, Tiberius, Claudius, Nero) would create propaganda artwork that would be saying in "art-speak" - "The whole earth worships the emperor."

There is a Greek word - Oikoumene - that describes this worldwide worship. This is where we get the word Ecumenical.

There is a piece of art you can see here called the Gemma Augustea You can see in the photo a woman (#3) - Oikoumene - the personification of the inhabited world - crowning Augustus. This is how you communicate worldwide worship.

At the city called Aphrodisias - not too far to the east of Ephesus - the museum contains multiple depictions of Roman Emperors declaring that the "whole earth" is worshiping them.

Here in Revelation 13 - John is symbolically speaking against the Roman Empire - likely Emperor Domitian. Notice who in Rev. 13:8 is worshiping the beast - those whose names "have not been written" in the book of life.

This is a direct attack on Rome and the 1st-century readers would have picked up on it immediately.

There is a great deal of archaeology that helps us understand the 1st-century culture of the book of Revelation. So much of what John is writing is communicated through cultural references that we often miss. Like this one.

In this passage as in all of Revelation the context is the Roman world, not the whole planet. The "beast" is the Roman military-industrial complex. When the war to which he refers (the Great Revolt of the Jews against Rome, Circa 70 AD) God takes credit for the Jews being utterly defeated, their temple and city destroyed by fire and the people put in utter subjugation or destroyed. No one can participate in Roman society ("buy or sell") without demonstrating subservience by sacrificing to the Emperor and any who refused was unceremoniously killed:

[Rev 13:7-8 NLT] (7) And the beast was allowed to wage war against God's holy people and to conquer them. And he was given authority to rule over every tribe and people and language and nation. (8) And all the people who belong to this world (the Roman empire) worshiped the beast. They are the ones whose names were not written in the Book of Life before the world was made--the Book that belongs to the Lamb who was slaughtered.

However, as soon as General Titus' armies arrived and began to surround the city of Jerusalem, God's holy ones, who had taken Jesus' warning in Luke 21 to heart, fled to the hills:

[Luk 21:20-24 NLT] (20) "And when you see Jerusalem surrounded by armies, then you will know that the time of its destruction has arrived. (21) Then those in Judea must flee to the hills. Those in Jerusalem must get out, and those out in the country should not return to the city. (22) For those will be days of God's vengeance, and the prophetic words of the Scriptures will be fulfilled. (23) How terrible it will be for pregnant women and for nursing mothers in those days. For there will be disaster in the land and great anger against this people. (24) They will be killed by the sword or sent away as captives to all the nations of the world. And Jerusalem will be trampled down by the Gentiles until the period of the Gentiles comes to an end.

The "period of the Gentiles" is the 3.5 year "trampling" of Jerusalem by General Titus and his army, in which there casualties of 1.1 million non-combatants. Others went into exile, losing their homes and livelihoods. And the temple was dismantled so that no stone was left upon another. 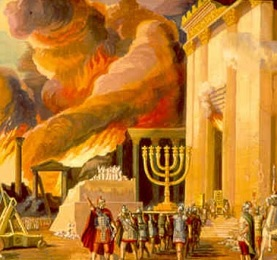 Prophetic language has a pattern. When the prophets were sent to a land or nation, the words "earth" and "heaven" took on a symbolic meaning for the people of that land.

"The Visions of Isaiah son of Amoz, that he hath seen concerning Judah and Jerusalem, in the days of Uzziah, Jotham, Ahaz, Hezekiah, kings of Judah. 2 Hear, O heavens, and give ear, O earth, For Jehovah hath spoken: ..." (Isa. 1:1-2, YLT)

Isaiah was speaking to the people in Judah and Jerusalem, both to those of the land "earth", and to those who ruled in positions of authority "heaven".

Moses was relaying God's word to the people, the tribes in the wilderness. God was not speaking to himself, and Moses was not warning God. The word "heavens" were the rulers of each tribe, as well as the Levitical priesthood who had authority. The "earth" were the rest of the people under that tribal authority.

So, in prophesy "heavens" refer to those people in authority or rule over a nation or land to whom the prophet was sent, and "earth" refers to those people living in that land / territory.

The word "beast" in prophesy was a symbol of a tyrant king, or ruler who metaphorically "fed" off the people as a lion hunts and chases down the weak and the young. There are two beasts in Rev. 13: the sea beast - the ancient Roman empire, & thus its ruler - Caesar; and the land beast (vs.11) which had two horns.

Horns were specific rulers or kings. The land beast was Judea / Jerusalem with the high priest and the king, both of whom ruled over the Jews. The land beast /ruler was subject to the sea beast ruler - Caesar.

"And bow before it shall all who are dwelling upon the land, whose names have not been written in the scroll of the life of the Lamb slain from the foundation of the world;"

All who were dwelling on the land under Roman rule, whose names were not written in the scroll / book of life - that is the converts to Christ - worshiped Caesar. The context of the prophesy was 1st century AD Roman empire, and the inhabitants of that empire's territory.

More scriptural evidence is presented in my posts "Heaven and Earth Have Passed Away" here, and "The Signs of Revelation - Part VIII: The New Heavens and New Earth" here.

6
Which beast does the number 666 represent
3
The Two witnesses and the Two Horns of The Beast
17
To what does the time clause connect in Revelation 13:8?
9
Why does John not participate properly in worship in the book of Revelation?
12
Who are the "kings of the earth"?
6
Antichrist, Man of Lawlessness, Beast of Revelation 13
4
In Revelation 20:10 when was the beast & false prophet cast into the lake of fire?
1
Second beast or the image that will force the people to receive a mark on their hands or forehead in Revelation 13:15-16?
1
Does Revelation 20:14 implicitly indicate that the Sea also will be cast into the lake of fire?
0
Which beast is the antiChrist?