Is the Gospel of John arranged as a chiasm?

In his book the Literary Structure of the Old Testament, David Dorsey compiles a list of fifteen ways the writers of the Hebrew bible linked narrative units into narrative patterns. One of these patterns is known as symmetric parallelism or chiasm.

Symmetry generally features two sets of units, in which the units of the second set match in reverse order the units of the first set: a-b-c // c'-b'-a'. There is often an unmatched central unit linking the two matching sets: a-b-c-b'-a' (some-times called "uneven chiasmus"). An example of a simple chiasmus from English literature is Pope's line" "a wit with dunces, and a dunce with wits."

Is John arranged as a chiasm and if so what further parallels complete this arrangement? 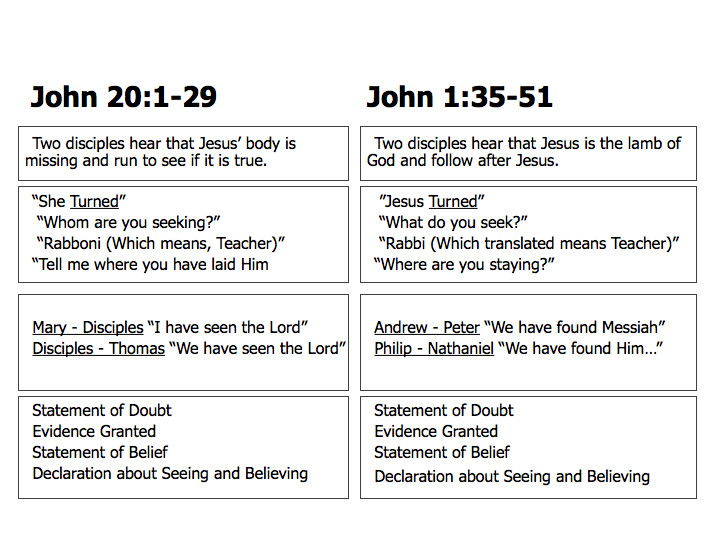 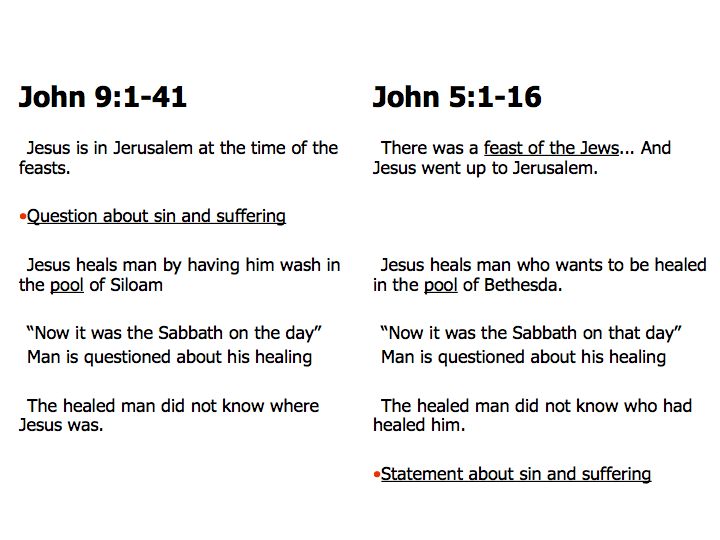 Good question. Being a rhetorician I am more than a little familiar with figures of speech and tropes, of which chiasmus is but one in the family of the five traditional canons of speech: elocutio (< L., for style), memoria (memorability), dispositio (organization), inventio (invention) and pronuntiatio/actio (delivery).

You can find an excellent overview of chiasmus' importance in the interpretation and exegesis of the Bible at http://chafer.nextmeta.com/files/v9n2_2chiasmus.pdf ("Chiasmus: An Important Structural Device Commonly Found in Biblical Literature," by Brad McCoy).

According to McCoy, chiasmus has been a rhetorical device in the written and spoken word for thousands of years. Chiasmus has been found as early as the third millennium B.C. in the organization of certain Sumero-Akkadian and Ugaritic texts, id., p.19.

Writers and speakers alike have used chiasmus to aid them in organizing their thoughts prior to addressing an audience. Chiasmus not only aided in organization, but it served to make the communication more memorable and easier to memorize for the audience. Even if some members of audiences in those days happened to be illiterate, as the orator spoke or as the reader read out loud, even illiterate auditors could benefit from good chiasm.

McCoy (via Man) suggests the use of chiasmus as a major structural feature in the Bible is rooted in the "Semitic mind," particularly in its thought and speech patterns.

Since your question is specifically about John's Gospel, I'll simply cite some Johannine passages that contain chiasmus, according to McCoy (by way of Raymond E. Brown and others):

McCoy goes on to say:

"In regard to the Gospel of John, scholars have proposed a plethora of theories concerning its content and organization in effort to explain certain literary rough spots and supposed inconsistencies in the chronological and geographical flow of the narrative of the book . . .. This paradigm of its overall arrangement of material nicely explains otherwise confusing aspects of its organization and content. In addition, a chiastic analysis of its overall literary structure transforms any erroneous perceptions of the book as a disorganized literary patchwork to the correct understanding of it as an ingeniously constructed integrated whole which has been justly described as “arguably the theological and literary masterpiece of the Church’s canon.”

I encourage you not only to read the article from which I quoted liberally, but also to take your findings from your analysis of John 1 and John 20 and see how well the two passages fit into a chiastic frame of reference.

Since the two chapters form a sort of exordium and conclusio (which is even considered "standard" in many speeches today, not to mention films!), maybe that "bookend" device might trigger further thinking on your part. You know that old saw about "Tell 'em what you're gonna tell 'em; then tell 'em; and then tell 'em what you told 'em."

Some other biblical passages linked to chiasmus include:

[N.B.: For the benefit of those not terribly familiar with chiasmus, here's a precis introduction. Chiasmus (or chiasm) gets its name from the Greek letter chi (X), because there is a certain "crossover" of parallelism (or "reverse parallelism") inherent in its structure. Though not strictly a chiasmus, the following sentence illustrates the basic figure:

and without bragging rests.

Form a chi (X) between "John labors" and "rests," and between "without complaining" and "without bragging." Voila! Chiasmus (in other words, A:B::B':A').

"Do not give what is holy to dogs, and do not throw your pearls before swine,

or they will trample them under their feet, and turn and tear you to pieces" (7:6).

Again, this is not strictly a chiasmus, but it mimics its X-like parallel structure. Interpreted correctly, the verse indicates it is the swine who trample and the dogs who tear to pieces, not vice versa.

A true chiasmus, as McCoy points out, is in the form of A:B:C::X:C':B':A', in which a unifying thought, X, is the pivot around which the parallelism turns. The parallelism could involve synonymous or antithetical elements.

Imagine being a believer in Moses' day, or even Jesus' day. Written copies of the scriptures are hard to come by, and if you cannot afford to make a copy of a sacred writing, the next best thing is to memorize it!

This is where chiasmus and other forms of parallelism serve as a mnemonic, or aid to memory. In Greek rhetoric an orator might assign the really important and perhaps "best parts" of his speech to various "haunts" (Latin, loci communes) within his brain, a process made easier by utilizing parallelism.

Using another mnemonic device just recently, I tried to "cement" Psalm 23 (in mostly the King James Version) in my memory by picturing Jesus as the Good Shepherd and me as one of His sheep.

First, Jesus makes me chillax in the cool green pastures. Then He leads me beside a quietly flowing stream for a nice draught of cool water. He then restores my soul, much in the same way as the water did, except He restores me with the living water He told the Samaritan woman at the well about! After restoring me, He leads me in paths of righteousness for His name's sake, and so on. It worked pretty well for me!

Perhaps chiasmus can be an aid for you in memorizing scripture, if only in outline form!]

This should really be a commment, since it doesn't directly answer the question, but: Peter Leithart, in his Revelation commentary argues that John's gospel and Revelation should be read together (like Luke and Acts) and they form two halves of a chiasm. The commentary is in two volumes: https://www.goodreads.com/book/show/25990927-revelation-1-11 https://www.goodreads.com/book/show/38721759-revelation-12-22

The relevant section is available in the book preview at location 693, although it is expanded later in the commentary, I think.

Not the answer you're looking for? Browse other questions tagged john literary-structure chiasm or ask your own question.

5
Other than as a memory aid what is the alleged hermeneutical significance of chiastic structure?
3
Is the Gospel of Mark arranged as a chiasm or parallel structure?

10
Is John 21 a later addition to the Fourth Gospel?
32
How can we ensure a given "chiasm" was intentional by the author, and is not merely fanciful eisegesis?
5
Are Matthew 4:17 and 16:21 intended to provide structure to the gospel?
3
Is the Gospel of Mark arranged as a chiasm or parallel structure?
2
Does the sermon on the mount follow a chiastic structure mapped by the Beatitudes?
5
Other than as a memory aid what is the alleged hermeneutical significance of chiastic structure?
3
Is Jeremiah 9:23-24 a good example of chiasm?
4
Why Gospel of John uses the word "Sign" instead of "Miracle"?
5
Does the Gospel of John teach Christian Universalism?