What is the significance of “a man carrying a jar of water” in Luke 22:10?

Luke 22:7 Then came the day of Unleavened Bread on which the Passover lamb had to be sacrificed. 8Jesus sent Peter and John, saying, “Go and make preparations for us to eat the Passover.”

9 “Where do you want us to prepare for it?” they asked.

10He replied, “As you enter the city, a man carrying a jar of water will meet you. Follow him to the house that he enters, 11and say to the owner of the house, ‘The Teacher asks: Where is the guest room, where I may eat the Passover with my disciples?’ 12He will show you a large room upstairs, all furnished. Make preparations there.”

13They left and found things just as Jesus had told them. So they prepared the Passover.

This scene reminded me of some kind of spy call-sign in James Bond 007 and Mission Impossible movies. What is happening here? Was it prearranged by Jesus? How much did Peter and John know?

In scripture, it is usually a woman who would be carrying a pitcher of water.

One's thoughts immediately go to Rebekah who gave water to the unnamed servant of Abraham who was tasked with the responsibility of finding a bride for Abraham's son, Isaac, Genesis 25. And, of course, thence to the incident of Jesus meeting the woman of Samaria at the same well, some eighteen hundred years later.

Abraham, the father, had sent an unnamed servant to find a bride for the son. And one cannot but think of the Father desiring a counterpart for the Son, and the involvement of the Holy Spirit in that enterprise.

But in the figure in Genesis 25, as often is the case in spiritual allusion and imagery, the concept moves from the unnamed servant to the woman with the pitcher of water (Rebekah) who then waters the camels, a spiritual allusion if ever there was one, indicating the same concept as we see at Cana of Galilee, the filling up with water by servants. The baptism of repentance.

Add to this the discourse of Jesus with the woman at Jacob's well in Samaria - the matter of life and water - and again there is spiritual allusion.

I would suggest, though since it has to be a matter of interpretation it cannot be 'proved' as such, I would suggest that the man with the pitcher of water is performing a humble service, actually the most basic form of service possible, really - the provision of water.

I would suggest that this is to be seen as the service of the Holy Spirit in guiding the 'bride' - the whole company of the body of Christ - to the place where the passover will be eaten. Again, a figure of the partaking of the body and blood of Jesus Christ.

I repeat, this cannot be 'proved' and it can well be disputed and other interpretations can well be suggested.

I don't think it is possible to answer "was it prearranged."

One idea comes from Bargil Pixner. He discovered the Essene Gate near the SW corner of the city wall. One of his books is called Paths of the Messiah

The South-west corner of Jerusalem was called the Essene Quarter (hence the Essene Gate which allowed them to access the latrines in the valley so they would be able to keep the command from Deuteronomy 23:12-14).

The Essene community was male-dominated. In the 1st-century only women carried water. But in the Essene Quarter - you would have men carrying water since there were no women available.

The reference to a "man carrying water" - would indicate that he was from the Essene Community. The Essene Community had in their writings a "Messianic Meal" (see this article from James Tabor here). This would indicate that the meal Jesus and his disciples are about to eat - while celebrating a Passover - is also THE "Messianic Meal" from the Essenes.

Although the Essene community is never directly mentioned by Jesus in the New Testament there are remarkable similarities between the Essenes and the early Church. If you haven't considered it before, it is a profitable study. 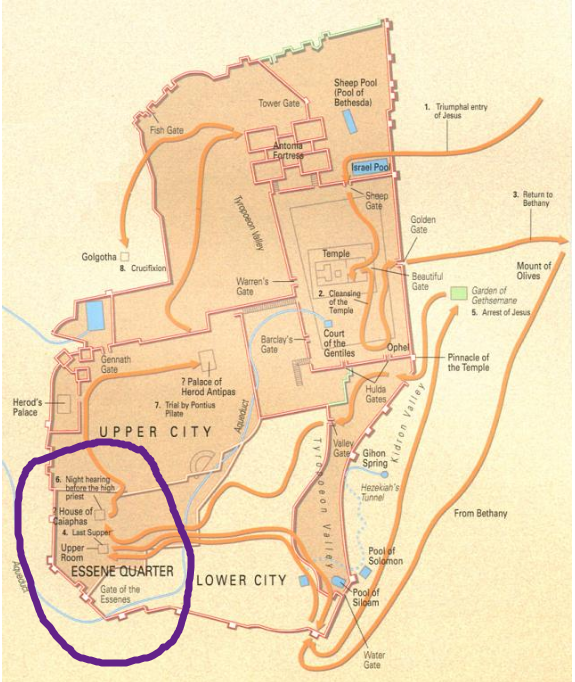 If allowed I will answer this in a way which will hopefully plant a seed and help you in the right direction. My answer will reference a few of many possible places in the bible:

Jude 1. Why do you think the false teachers were referenced as "clouds they are without water" in verse 12?

Job 22. Why is Job told that an abundance of water covers him in verse 11?

I want you to think what the water might represent, spiritually?

These are but many of the instances I can help you understand what is meant with your question.

Again, why did David take the small rock with which he killed Goliath out of a stream of water?

I hope this invokes something in you.

[Luke 22:10] refers to “the meal offering of remembrance” which recalls adultery - fulfilling [Numbers 5:17] “The kohen shall take holy water in an earthen vessel, and some earth from the Mishkan floor, the kohen shall take and put it into the water.”

A man carrying water violates 1st century gender norms, making this one of many instances where gender transgression is affirmed as playing a central role in making creation holy again.

Not the answer you're looking for? Browse other questions tagged luke or ask your own question.