The funerary custom of burning corpses

It seemed to be a matter of great ignonimy to be burnt upon one’s death or burnt to death:1 “From this it may be concluded that the burning of the human body was looked upon with horror.”2

However, there appears to be mention in the Torah of Israelite kings being burnt as a customary practice, and not one of punishment. Compare the following verses:

13 And Asa slept with his fathers, and died in the one and fortieth year of his reign. 14 And they buried him in his own sepulchres, which he had made for himself in the city of David, and laid him in the bed which was filled with sweet odours and divers kinds of spices prepared by the apothecaries' art: and they made a very great burning for him. KJV, ©1769

18 And after all this the LORD smote him in his bowels with an incurable disease. 19 And it came to pass, that in process of time, after the end of two years, his bowels fell out by reason of his sickness: so he died of sore diseases. And his people made no burning for him, like the burning of his fathers. 20 Thirty and two years old was he when he began to reign, and he reigned in Jerusalem eight years, and departed without being desired. Howbeit they buried him in the city of David, but not in the sepulchres of the kings. KJV, ©1769

4 Yet hear the word of the LORD, O Zedekiah king of Judah; Thus saith the LORD of thee, Thou shalt not die by the sword: 5 But thou shalt die in peace: and with the burnings of thy fathers, the former kings which were before thee, so shall they burn odours for thee; and they will lament thee, saying, Ah lord! for I have pronounced the word, saith the LORD. KJV, ©1769

Note: In Jer. 34:5, the KJV has the word “odours” italicized, indicating that it was not translated from the Hebrew but added by the translators. 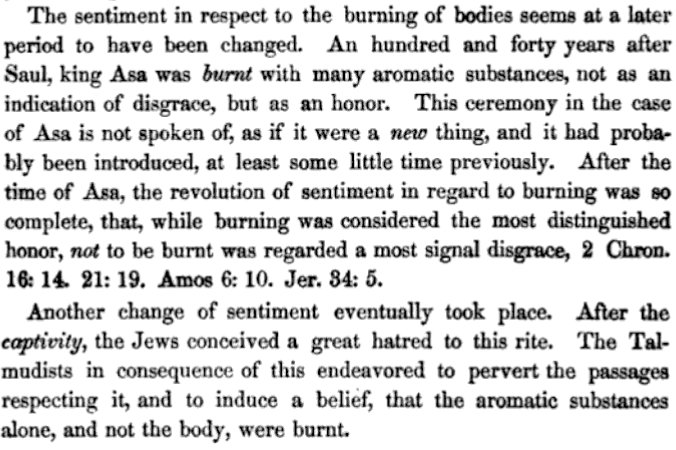 Gesenius, in the 1st edition of his lexicon, wrote that the verb שָׂרַף was used „Vom Verbrennen des Leichnams und dem damit verbundenen Leichenbegängniss“, that is, “of the burning of the corpse and the things associated with the burial.”4

Does the Hebrew text suggest that the corpses of the kings were burnt, or was it indeed the spices that were burnt?

Gottheil, Richard. “Cremation.” The Jewish Encyclopedia: A Desriptive Record of the History, Religion, Literature, and Customs of the Jewish People from the Earliest Times to the Present Day. Vol. 4. Ed. Singer, Isidore. New York: Funk and Wagnalls, 1903.

Note that in all cases the burning is made "for", not that he is burnt:

In all cases the burning is "for him", or "for you", that is, in his honor, not that he is burned, which would have used the direct object form וישרפו אותו/ישרפו אותך as in:

From the latter examples it is clear that burning of bodies was considered an atrocity which prevented a person from being "gathered to his fathers", i.e. buried with his ancestors.

Bonfires in honor of important people were common in the ancient world, as mentioned in in the mishna in the Babylonian Talmud tractate Avoda Zara, top of page 8a, "... the day that the (non-Israelite) king is inaugurated, and his birthday and the day of his death [it is forbidden to deal with them]. And the sages said, "Any funeral [of the non-Israelites] for which there is a bonfire there is idol worship [because of the incense]." Here it is clear that the reason for the abomination is not that a body is burnt but that there is incense that is burnt, which is against the prohibition of incense except for use in the service of the LORD in the temple.

Johann Jahn's comment appears to be not founded on what we would consider to be scholarly grounds today. For one, we would expect to see an archaeological record of cremation sites associated with the late first temple, and there is none. We would expect that if kings were cremated then other nobles might also be, yet there is no evidence on the ground for this. Unfortunately, Jahn references only "Talmudists" without specific reference to a passage. The only passage that I am aware of is the passage cited above in Avoda Zara, a careful reading of which shows that the concern of the sages is the incense, not that they though a corpse was burnt.

Genesis 25, in regard Abraham:

9And his sons Isaac and Ishmael buried him in the cave of Machpelah, in the field of Ephron the son of Zohar the Hittite, which is before Mamre;

Genesis 35, in regard to Isaac:

29And Isaac gave up the ghost, and died, and was gathered unto his people, being old and full of days: and his sons Esau and Jacob buried him.

Genesis 50, in regard to Jacob:

13For his sons carried him into the land of Canaan, and buried him in the cave of the field of Machpelah, which Abraham bought with the field for a possession of a burial place of Ephron the Hittite, before Mamre.

Whatever one might think "burning" refers to, it could only ever mean "cremated" if there existed evidence to support the claim that "buried him" did not mean "interred his body", i.e. that "buried him" was equivalent to "buried his ashes".

My opinion, and I believe that is all one can offer in regard to this question, is that "buried him" throughout the Bible has always meant "interred his body".

Not the answer you're looking for? Browse other questions tagged hebrew-bible or ask your own question.

5
Textual criticism of the Hebrew bible and the rule of the ‘lectio difficilior'
7
Why were they always meeting their future wives at the well?
4
What did Moses see on the back side of God?
3
What is the earliest dating we can put on the orderings of the books of the Old Testament?
2
(1 Chronicles 1) Why is Seir ancestorial lineage Missing from amongst the Adamic lineal descendants lineage description?
0
(1 Chronicles 3:21) verse “…the sons of Rephaiah, the sons of Arnan, the sons of Obadiah, the sons of Shecaniah…”. Unclear?
3
How should we view/interpret Jacob's initiative involving the rolling of the stone from the mouth of the well?