Is εἰμί (and thus ἦν) always a stative verb? Or, is ἦν a substantive verb in John 1:1a (ἐν ἀρχῇ ἦν ὁ λόγος)?

This question is based on a comment on this post to this question. In the comment, it was denied that the verb ἦν in John 1:1a (viz., ἐν ἀρχῇ ἦν ὁ λόγος) is functioning as a substantive verb. It was affirmed, rather, that it was functioning as a stative verb and that “Ειμι is always stative.”

Now, if ἦν is always stative, then εἰμί is always stative, as ἦν is a conjugation of εἰμί. According to LSJ on εἰμί, the first entry (A.), it states that εἰμί can be used as a substantive verb with the meaning of “exist” and “be.” 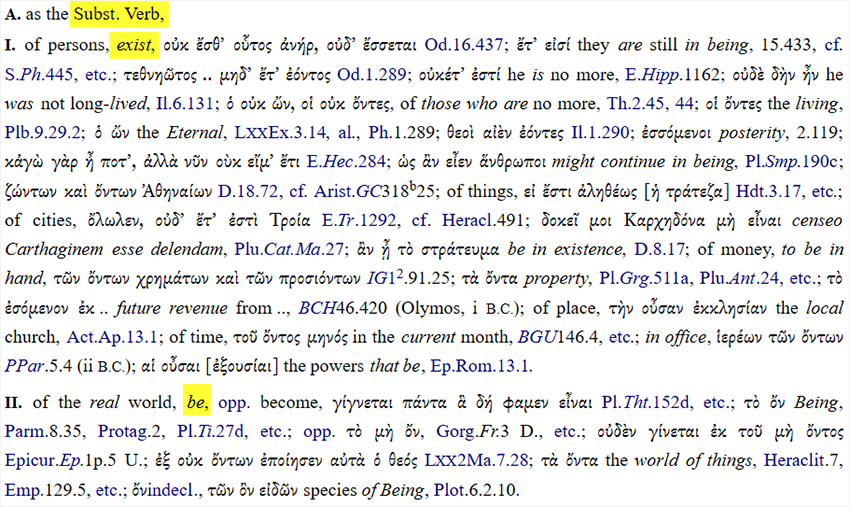 Substantive Verb: one which simply expresses being. Hence the verb ‘to be’ is the only substantive verb in the language. It is therefore called the substantive verb; its characteristic function being to express the existence of a substance without the notion of action.

Not only LSJ, but also Thayer recognizes that εἰμί can function as a substantive verb, citing John 1:1a (ἐν ἀρχῇ ἦν ὁ λόγος) as one of the instances.

A stative verb, on the other hand, which εἰμί can certainly function as, just like the English verb “to be,” describes a static condition or state of being. For example, “I am sick.” “I am tired.” “I am happy.” But, not “I am,” and not “The Word was.” In the aforementioned examples, the verb is followed by a predicate adjective (“sick,” “tired,” “happy”). This is not the case with ἦν in John 1:1a. There is simply the subject ὁ λόγος, the verb ἦν, and the prepositional phrase ἐν ἀρχῇ modifying the verb ἦν. There is no predicate adjective.

(1) Is εἰμί (and ἦν) always stative (contra LSJ, Thayer)?
(2) Is ἦν functioning as a substantive verb with the meaning of “exist” in John 1:1a (the first independent clause in John 1:1)? Hence, “In the beginning, the Word was existing.”1

The verb "to be" εἰμί (eimi in Greek) in almost all languages is probably the most used because it is worked so hard. Its versatility is shown clearly in John 1:1 as follows:

In the beginning was the Word = [= existence]

. And the Word was with [the] God [= relationship]

. . And the Word was God [= predication, in this case, a qualitative category statement]

More generally, the use of εἰμί (eimi) can be classified into at least four uses:

Seven times in the Gospel of John alone Jesus uses this verb to declare His eternal existence and well as identifying with the OT "I AM".

[There are another seven such in the other Gospels but I do not wish to clutter this too much.]

However, εἰμί (eimi) is capable of much more. I note that both Thayer and BDAG list numerous uses for this versatile verb, the first of which is invariably meaning "to exist". More specifically, both list John 1:1a as a statement of existence.

The distinguishing characteristic of stative verbs is their use to show the status of something. "I am in love"; or, "The car is broken". In English, this usually amounts to a simple copula between the subject and predicate (the state). When alone, eg, "he is", amounts to a statement of existence.

Not the answer you're looking for? Browse other questions tagged greek john grammar or ask your own question.

2
In John 13:13, are the nominatives «ὁ διδάσκαλος» and «ὁ κύριος» functioning as vocatives?
2
Why is this future verb translated as a perfect? (John 2:17)
7
Why did angels speak a sentence of eleven words without a verb?
2
Which is the main verb of the sentence in 2 Peter 1,3-4?
2
What does the verb tense etc. for τηρήσετε in John 14:15 indicate?
1
In Deuteronomy 8:3 why is "live" a future verb?
2
Since the Word received life in John 1:3-4 per the UBS Greek text, can the prologue also support the Word was eternal?
3
Is a translation of John 1:10 with 'it' instead of 'he' and 'him' grammatically problematic?