7 For the vineyard of the Lord of hosts is the house of Israel, and the men of Judah his pleasant plant: and he looked for judgment, but behold oppression; for righteousness, but behold a cry.

At Jeremiah 2:21 God refers to the unfaithful nation of Israel as "the degenerate plant of a strange vine".

21 Yet I had planted thee a noble vine, wholly a right seed: how then art thou turned into the degenerate plant of a strange vine unto me?

Unlike the degenerate unfaithful nation of Israel, Jesus is the "true vine" and his Father is the vinedresser. Jesus then likens his faithful disciples as the branches and implores them to remain in union with him, in order to be fruitful and productive.

John 15:5 NASB “I am the vine, you are the branches. He who abides in Me, and I in him, bears much fruit; for without Me you can do nothing.

Several things all coalesce in this first sentence in John 15, namely:

He also adds something extra in V5-8; He takes the opportunity to emphasise that we are completely dependant upon Jesus for all good things, especially life in our Chrsitian walk:

I am the vine and you are the branches. The one who remains in Me, and I in him, will bear much fruit. For apart from Me you can do nothing. If anyone does not remain in Me, he is like a branch that is thrown away and withers. Such branches are gathered up, thrown into the fire, and burned. If you remain in Me and My words remain in you, ask whatever you wish, and it will be done for you. This is to My Father’s glory, that you bear much fruit, proving yourselves to be My disciples.

In summary, while joined to Christ we can accomplish great things for Him and by Him; disconnected from Christ we will be cut off and thrown into the fire - we are lost.

He further notes that, over time, English has failed to distinguish between the two, eventually translating both by the adjective “true.”

As the Oxford English Dictionary notes, on its entry for “very,” as an adjective it was “Very common from c1300 to c1600; now rare except as an echo of Biblical usage.”

Thayer notes that certain earlier English translations (e.g., Wycliffe’s) did distinguish the Greek words by translating them into English as “true” and “very,” respectively. 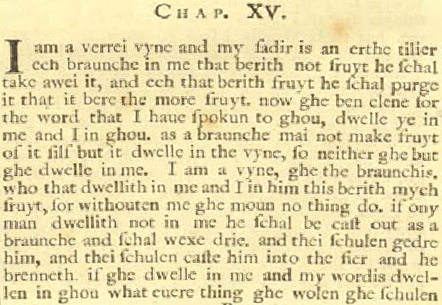 As both Trench and C. Stroud note, it is retained and translated appropriately in the Nicene Creed.

Trench notes, also, that the adjective ἀληθινός has in it the suffix -ινος which “expresses the material out of which anything is made.”2

2 Using the Perseus search function, searching for words ending in “inos,” and and then searching the results for the phrase “made of,” one may observe the multitudes of adjectives used in this sense. Some examples include ξύλινος (from ξύλον), “made of wood; wooden”; γήινος (from γῆ), “made of earth; earthen”; κρίθινος (from κριθή), “made of barley”; λίθινος (from λίθος), “made of stone”; etc.

He then cites Karl Friedrich August Kahnis in his Die Lehre vom Abendmahle3 whom he says well explains the difference between ἀληθής and ἀληθινός.

ἀληθής and ἀληθινός differ thus, by the fact that the former word (ἀληθής) excludes the untrue and unreal, [while] the latter [word] (ἀληθινός) does not [exclude] the corresponding [untrue and unreal] of its idea. The measure of ἀληθής is the reality; the measure of ἀληθινός [is] the idea. The idea of the object corresponds with ἀληθής, [while] the object of the idea [corresponds] with ἀληθινός.

Trench provides a couple examples to illustrate the point. Xenophon4 said of Cyrus that he commanded «στρατεύματι ἀληθινῷ», “a very army” or “an army indeed.” Trench says that Xenophon “would not have altogether refused this name of ‘army’ to inferior hosts.” Plato5 referred to the sea beyond the pillars of Hercules (straits of Gibraltar) as «τὸν ἀληθινὸν ἐκεῖνον πόντον», “that very sea.”

In the Old Testament, the Law of Moses was a light.7 In the New Testament, John the Baptist was a light,8 as well as the disciples of the Lord.9 The Lord Jesus Christ is the very light because he illuminates every one who comes into the world,10 shining in the darkness which cannot overcome him,11 whereas other light only shines so bright, so far, for so long.

In the Old Testament, God gave the Israelites manna from heaven,12 “bread of the nobles,”13 sustaining the Israelites while they wandered in the wilderness.

The Lord Jesus Christ is very bread because those who eat of him shall never hunger,14 and in fact, never die,15 whereas those who eat other bread will hunger again.

In the Old Testament, the nation of Israel was a vine planted by God Himself.16 But, because of unfruitfulness, that vine was burned with fire and cut down.17 The Lord Jesus Christ is the very vine because he is very Israel,18 and the branches of the very vine are those “in Christ” who are “fruitful in every good work.”19

If the very vine is Jesus Christ, then the very vine is also Christ’s body, the Church. To be precise, the members of Christ’s body are the branches of the vine. While there are fruitful branches, there are also unfruitful branches that the Father prunes from the vine.20 These unfruitful branches are not unbelievers, for they would never be in the very vine to begin with. Rather, they are believers who are lukewarm,21 or as Meyer calls them, Maulchristen (“mouth Christians”)22—those Christians who profess to be Christian but their works betray them,23 for Christ said, “Every tree is known by its fruit.”24 Even the apostle Paul warned Christians not to be high-minded, but fear, lest God breaks them off of the olive tree.25

It was definitely not a random choice. Jesus was emphasizing on its spiritual reality significance. It is not just a metaphor or symbolism.

John 6:63 The very words I have spoken to you are spirit and life.

From the literary point of view, Jesus has painted a beautify picture in our mind of vine, connection, and fruits in John 15 and we can apply that to our life. But more than that, I have understood what He says as spiritual reality. In my spirit, I see in the spiritual realm a real and true existence of spiritual vine described in John 15. This is possible because of the spiritual connection via our indwelling spirit Who teaches us all things. Earth is temporal reality; heaven is really the true reality.

These are all to do with who Jesus is. As in "very God of very God"-verax- veracity-truly God. Other examples:

A useful contradistinction being to compare "alethinon", who God is, with what is said:

Back to "alethinon, in Hebrews 8:2 "the true" tent is in heaven. The tabernacle in the wilderness was real but only a copy of the real/true thing.

God the Father, for His own glory, willed and initiated the grafting of the (wild) branches into the true vine (Jesus) that the branches bear "true fruits" pleasing to God. To that end, disciples must continue to have the mutual relationship of abiding "in Me and I in you," outside which the stated fruit-bearing will not be possible. And, besides, Jesus equates "I in you" with "My Words in you" (v.7).

Jesus warns that Father God will take away every branch (disciples), that ceases to bear true-to-name fruit, and do not abide in the true vine (Jesus) cut off and withers and thrown into the fire to be burned.

Jesus promises that the Farmer (God the Father) will take good care of the branches to bear more fruit, and He will answer all their requests if they abide in Jesus and Jesus' words abide in them.

2. The significance of "I am the true vine."

In context (Jn. 15:1-5), ἄμπελος means "vine tree," is a metaphor for Jesus, for Jesus is speaking explicitly regarding personal relationship: the true vine tree and branches, Jesus and His disciples. Besides, in the Scripture, God is always the planter or the owner of the vine tree/the vineyard.

I am "the true (ἀληθινή) vine tree" - Jesus uses Botanical metaphor best to convey that He is the genuine, authentic, and the original vine tree — i.e. "true-to-name-vine tree." Here, Jesus is saying to Disciples; He is the true messiah of God (Jn. 3:16; Acts 4:12; Phil. 2:7-9) that they must proclaim Him. (Disciples soon to go out as the witness of Christ.)

The significance of "I am the true vine tree" is in the botanical metaphor. According to the Science of Grafted Fruit Tree, the seed cannot produce the same rootstock fruit because of the cross-pollination of seeds –i.e., Plant an apple seed does not yield the same exact type of apples the seeds came from. Fruit are look- alike, but not the true-to-name apple.

In effect, Jesus is affirming, Jesus/His Word is the true, genuine "seed" which He entrusts with Disciples, which they must guard and preserve from all cross-pollination" from within and without. To do that, they must abide in the true vine, Jesus and His Word. As disciples, with due care, sow the unadulterated "seed,"(the gospel of Jesus) it will replicate the "true-to-name" grapes(vine) (Fig. disciples) in all nations as the Lord commanded (Mt. 28:18-20). And that will be the fruits of Evangelism that glorifies God.

The Apostles, the first runners of the Great Commission, and upon whom the church is to build (Eph. 2:20), did not fail the Lord's expectation and passed on the "seed" to the next runners. With their life, they kept their loyalty to the Lord.

If I may be so bold, in Zechariah 4v6 the angle said to him; 'Not by might nor by power,but by my Spirit',says the LORD Almighty.