I recently noticed that in both Papyrus 72 and Codex Sinaiticus a semicolon appears before baptism. Wouldn’t this move baptism out of the first part of the verse and change the verse significantly? Has this ever been studied?

The actual picture of the text in question (from my personal copy) looks like this: 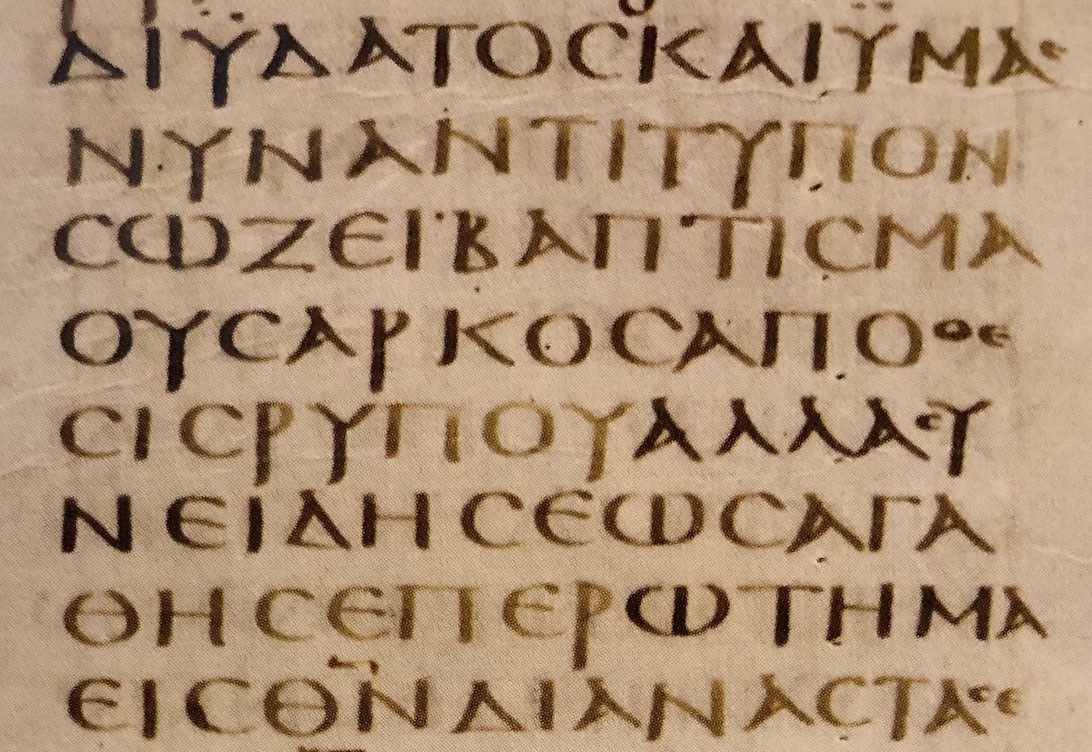 The actual text of Codex Sinaiticus at 1 Peter 3:21 is:

(Note that because the famous codex is a uncial text, no spaces exist in the original version so that the above text has had the spaces included.)

There is no punctuation at all, so no semicolons or comas or anything. The Codexsinaiticus.org site renders the above text into English as:

Which (water) in its antitype, baptism, now saves you also (not the putting away of the filth of the flesh, but the inquiry of a good conscience toward God), through the resurrection of Jesus Christ,

Compare this to the BLB version:

which also prefigures the baptism now saving you, not a putting away of the filth of flesh, but the demand of a good conscience toward God, through the resurrection of Jesus Christ,

I agree that one of the several random dots occurs before the word "baptism" and P72 appears to have the same feature. If this is intentional, then it is rare and has not been incorporated into any modern edited editions. If this "dot" is intended as a comma, then the grammar would be stretched as the word "saving" needs something to modify (perhaps implied water??); but the overall sense would remain largely untouched.

Not the answer you're looking for? Browse other questions tagged greek textual-criticism 1-peter punctuation or ask your own question.

15
Does Peter suggest Jesus "descended into hell"?
10
Coherence-Based Genealogical Method vs. Local Text-Types Theory
14
How authentic is Codex Sinaiticus?
5
What does the grammatical tense of the verb "judged" in 1 Peter 4:6 tell us about the order of the events in the verse?
11
What is the original Number of the Beast?
4
Question about NET note and Symbols for Codex Sinaiticus
5
Odd construction in 1 Peter 3:2?
7
Acts 11:20 according to the Codex Sinaiticus
4
Do Peter's words in 1 Peter 2:24 suggest that 'wound' would be a better word than 'bruise' in Genesis 3:15?