Since at Galatians 1:1 Father is appositional to θεός but Son is never in the NT, how does this make them θεός differently?

Since at Galatians 1:1 "Father" is appositional to θεός but "Son" is never in the NT, how does this make them θεός differently?

He also says the grammar of θεού πατρος is a Genitive in Simple Apposition like "Paul the Apostle." 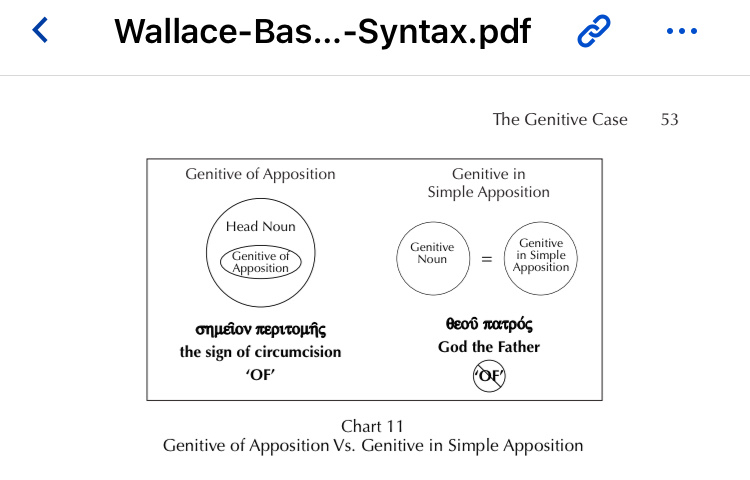 Another Greek example Wallace gives for Genitive in Simple Apposition is “Paul the apostle.”

For a genitive in simple apposition the two nouns are equivalent to a convertible proposition. Thus, “Paul the apostle” could be unpacked as “Paul is the apostle” or “the apostle is Paul.”

Therefore “God the Father” means “God is the Father” in Greek. This is also an example of the Apollonius Canon which means the presence or lack of the article is not meaningful.

Since Bible writers don't say “God is Jesus” [b] what does "God" in "God is the Father” at Galatians 1:1 and in many other places in Paul signify?

What does it mean when "God is the Father" but God is not Jesus? 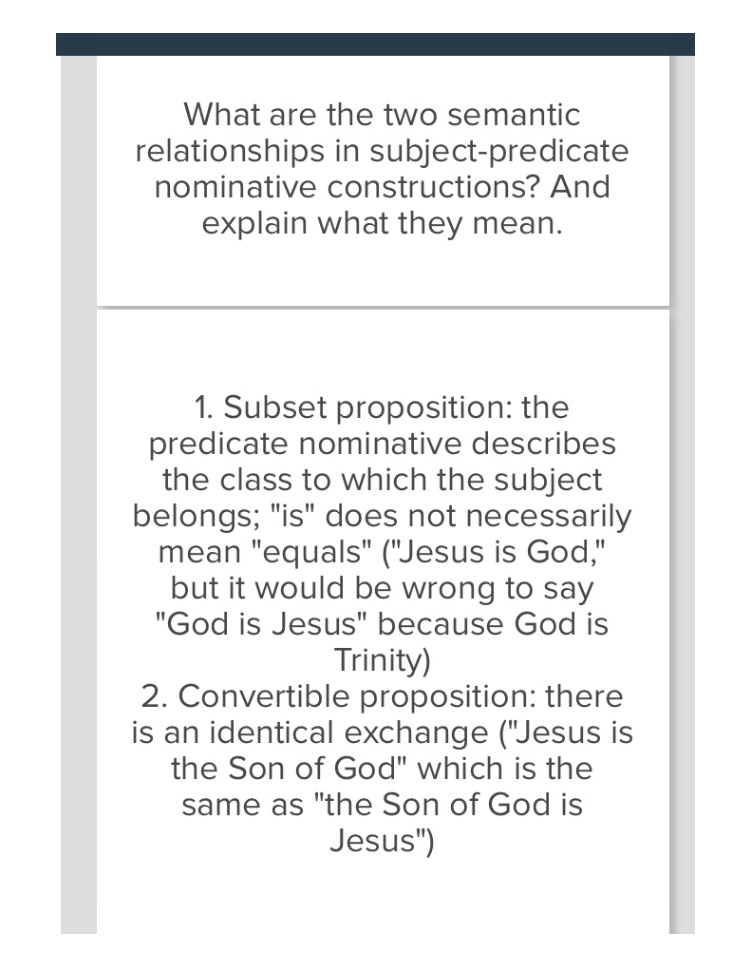 [b] Murray Harris in "Jesus as God" agrees with Wallace. 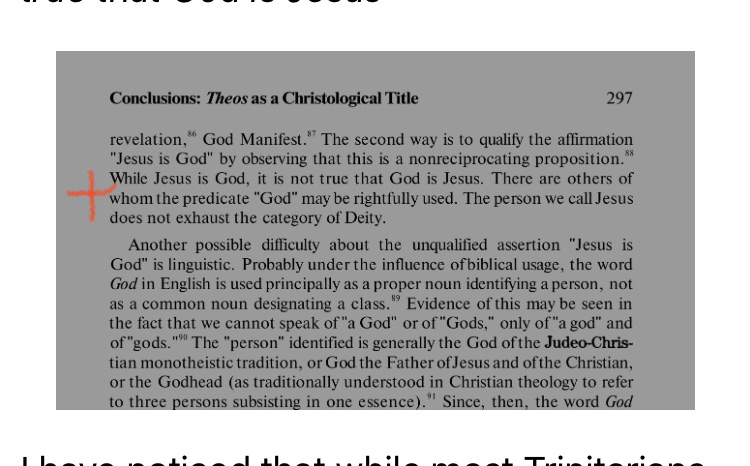 Note: θεού πατρος conforms to Apollonius’ Canon and is not one of the exceptions.

This construction, known as Apollonius’ Canon, means that both the head noun and genitive noun mimic each other with regard to articularity. Thus, we would expect either ο λόγος του θεου or λόγος θεου , but not λόγος του θεου or ο λόγος θεου. The canon, however, has many exceptions in classical Greek as well as the NT. Nevertheless, for the most part, when the article is present in the construction, it is expected with both head noun and genitive noun. In such cases, the article often carries little semantic weight,18 because even when both nouns lack the article, they are normally definite (Wallace Exegetical Syntax, 107)

Clearly there is no article; yet θεοῦ πατρὸς is almost universally rendered as "God the Father" and very few translations show they have added the assumed ellipsis:

Paul — an apostle not from humans nor through a human, but through Jesus Christ and God the Father, the One having raised Him from the dead (DLNT)

Paul, apostle, not from men nor through man, but through Jesus Christ, and God [the] Father who raised him from among [the] dead, (DARBY)

In this letter, often called the Magna Carta of Christian liberty from the Law, Paul begins by failing to “properly” acknowledge “the” Father. Before considering nuances such as grammatical apposition, Paul’s opening semantics raise a significant question as it pertains to God and Father and Jesus Christ. This is apparent when the address is considered in light of Paul's other letters:

In addition to dropping the article, Paul reverses his typical and what would be considered the correct doctrinal formulation. Semantically Paul has "demoted" the Father relative to Jesus Christ: a significant hermeneutical issue. Moreover, any conclusion about the difference between Father and Son based on grammatical apposition of God and Father would lead to the conclusion Paul used semantics to show the Son's superiority to the Father in this verse, something he continues to do throughout the letter:

3 Grace to you and peace from God our Father and the Lord Jesus Christ, 4 who gave himself for our sins to deliver us from the present evil age, according to the will of our God and Father, 5 to whom be the glory forever and ever. Amen.
3 χάρις ὑμῖν καὶ εἰρήνη ἀπὸ θεοῦ πατρὸς καὶ κυρίου ἡμῶν Ἰησοῦ Χριστοῦ, 4 wτοῦ δόντος ἑαυτὸν ὑπὲρ τῶν ἁμαρτιῶν ἡμῶν ὅπως ἐξέληται ἡμᾶς ἐκ τοῦ αἰῶνος τοῦ ἐνεστῶτος πονηροῦ κατὰ τὸ θέλημα τοῦ θεοῦ καὶ πατρὸς ἡμῶν, 5 ᾧ ἡ δόξα εἰς τοὺς αἰῶνας τῶν αἰώνων· ἀμήν.

Father is first in the next verse, but again without the article and Jesus Christ is now "our Lord." Even though Jesus Christ is placed in “proper” position, He is given added appellations.1 In the next verse the article is finally used but with God and it can only be seen as applying to the Father, if the rule governing the TSKS construction is valid. Ironically, "the" Father is only such in Galatians if Paul has demonstrated he applied Sharp's Rule.2 If the rule is not valid then Paul has said there is "the God," who is distinct from "Father" (without article or appellation).3

The last use is Paul's pièce de résistance in explaining the Father's role in the new life the Galatians received:

And because you are sons, God has sent the Spirit of his Son into our hearts, crying, “Abba! Father!” So you are no longer a slave, but a son, and if a son, then an heir through God.
(4:6-7)
ὅτι δέ ἐστε υἱοί ἐξαπέστειλεν ὁ θεὸς τὸ πνεῦμα τοῦ υἱοῦ αὐτοῦ εἰς τὰς καρδίας ἡμῶν κρᾶζον αββα ὁ πατήρ. ὥστε οὐκέτι εἶ δοῦλος ἀλλὰ υἱός εἰ δὲ υἱός καὶ κληρονόμος διὰ θεοῦ

The Father is once again “demoted,” coming after both the Son and the Spirit! Paul makes the astonishing claim Gentiles may address the Father (the article is finally used) by the Aramaic term of endearment, "Αββα." To the Jewish mind who believed even vocalizing the Name of God was taboo, this would likely be considered as blasphemy. Based on this letter, Paul's message is clear: the Father is God and an active participant in the Resurrection of Jesus Christ and as such should be addressed affectionately as "Αββα," but is of lesser significance to the Son and the Spirit in bringing salvation.

The theological implication in Paul's treatment is the Father, while having a lesser active role to the Son and the Spirit, was in complete agreement with the actions of the others; so much so He desires to be called "Αββα." It is this filial relationship which results in the Galatians Gentiles being called an "heir through God" (διὰ θεοῦ).

I mean that the heir, as long as he is a child, is no different from a slave, though he is the owner of everything, but he is under guardians and managers until the date set by his father. In the same way we also, when we were children, were enslaved to the elementary principles of the world. But when the fullness of time had come, God sent forth his Son, born of woman, born under the law, to redeem those who were under the law, so that we might receive adoption as sons. And because you are sons, God has sent the Spirit of his Son into our hearts, crying, “Abba! Father!” So you are no longer a slave, but a son, and if a son, then an heir through God (διὰ θεοῦ). (Galatians 4:1-7)

Conspicuous is the lack of any mention of the resurrection of Jesus Christ, the event without which there is no salvation for either the Gentiles, or those of Jewish descent, and no apostleship for Paul. Therefore, the intermediate agent was simply "God" (θεοῦ) and from verse 1 the active agents were Jesus Christ and God-Father (Ἰησοῦ Χριστοῦ καὶ θεοῦ πατρὸς τοῦ ἐγείραντος αὐτὸν ἐκ νεκρῶν). Finally, the Galatians are only sons if they have received the Spirit. Therefore the intermediate agency, "God" is made up of three active agents, Jesus Christ and God-Father who raised Him from the dead and the Spirit.

Conclusion
Paul has given two clear statements of the nature of God. First, using the article when all four are together: ὅτι δέ ἐστε υἱοί ἐξαπέστειλεν ὁ θεὸς (God) τὸ πνεῦμα (Spirit) τοῦ υἱοῦ (Son) αὐτοῦ εἰς τὰς καρδίας ἡμῶν κρᾶζον αββα ὁ πατήρ (Father). Second by contrasting the active agents of the resurrection and Spirit, to the intermediate agent who is simply "God" and in the context before Jesus is raised from the dead. In other words, the ultimate goal was to bring the Galatians into the family where they would be sons and heirs. In this plan, God was the intermediate agency and the active agents were Jesus Christ, God-Father who raised Jesus from the dead and the Spirit given to those who believe in the Resurrection (cf. Romans 10:9-10). Paul has used grammar and semantics to demonstrate the Trinity.

Also Paul used the article with God and Father to create either an anecdotal reference to the deity of the Son in other works (by Sharp’s Rule), or a statement which removes the grammatical apposition by making "the Father" as distinct from "God," which can only be possible if God = Father + Son + Spirit.

Notes:
1. The title “Lord” as applied to Jesus in the New Testament “...speaks to absolute lordship of Christ over the whole world…unquestionably presupposes the deity of Christ, but does so in connection with faith in the lordship he exercises since his exaltation; that is, primarily in connection with his work rather than with his being.” Oscar Cullmann, The Christology of the New Testament, translated by Shirley C. Guthrie and Charles A. M. Hall, The Westminster Press, 1959, p. 235. So in terms of agency. “Lord” reinforces the active role Jesus Christ has in bringing salvation after His death and resurrection.
2. Consequently it should be understood as such when Paul uses the same rule to make explicit an statement regarding the Divinity of Jesus Christ. (cf. Titus 2:13)
3. In other words The God = Trinity of which Father is just one person.
4. Daniel B. Wallace, Greek Grammar: Beyond the Basics An Exegetical Syntax of the New Testament, Zondervan, 1996, p. 434

Wallace gives the answer in his explanation. When "God" is appositional to someone an assumption is being made.

This means it is assumed that God is the Father.

When a verb is present a mere assertion is being made.

No word .... nothing separates Him from His identity as God.

The appositive functions very much like a PN in a convertible proposition— that is, it refers to the same thing as the first noun. The difference, however, is that a PN makes an assertion about the S (an equative verb is either stated or implied); with appositives there is assumption, not assertion (no verb is in mind).

Paul does not make a statement (assertion), but assumes the relationship involved.

4
Assuming Paul intended Titus 2:13 to mean two different referents, what advantage does his choice of words have over others which are unambiguous?

5
How does geography impact the interpretation of Galatians?
5
How does ὁ ἐρχόμενος relate to the Father? How is the father "coming"? (Ἀποκάλυψις [Revelation] 1,4)
1
In 1 Peter 1:2, why is "of blood" in the genitive?
1
Why does Paul say he wasn't sent by men?
1
In Philippians 2:11 are "God" and "the Father" used in apposition?
2
Is the article in 2 Peter 1:2 (του θεου) anaphoric to θεός in 1:1? If not, what grammar denies it?
2
How does the fact that the Father is the “only true God” (Θεός) at J 17:3 in a convertible proposition affect the sense in which Jesus is θεός?
1
Is the article ο in ο θεός at Hebrews 1:9 anaphoric to θεός at Hebrews 1:8? If not, what grammatical reason prevents it?