In John 5, the fourth evangelist describes the pool north of the temple's sheep gate in Jerusalem. John 5:2 says:

John 5:2, Now in Jerusalem by the Sheep Gate there is a pool, called in Hebrew Beth-zatha, which has five porticoes.

For about all of the history of the church (up until about 100 years ago), John 5 was the only witness to this pool. It was not in Josephus, or other historians of the area. This led many people to believe that the pool was allegorical and that John was a much later Greek author and the gospel could be dated to the late second century (e.g. 150 - 175AD). These scholars thought that John fabricated the pool as a metaphor.

Then archaeologists found the pool right where John says it was. This means that John had deep insights into pre-70AD Jerusalem and temple geography and is a large reason for the change in dating of the gospel anywhere from 65AD - 90AD (or being formed over that period). But, the archaeological reconstruction of the ruins shows a picture with seven porticoes, not five (see below). There seem to be four porticoes around the square upper pool, and then three porticoes around the lower pool.

Does anyone have any sense of what this might mean? For the fourth gospel, the number seven is very important. Seven signs, seven "I am the ..." statements, and seven "I am (Ego Eimi)" statements amongst others. For the Torah, the number seven is obviously of great importance. The first seven words of the bible form the statement of the first act of creation ... which occurs in seven days... etc. There are seven day purification intervals in the torah... The author seems to have rare/unique knowledge of Jerusalem, backed up by archaeological evidence, but has described Bethesda as having five porticoes instead of either 4 (for the upper pool only) or seven, for the entire structure.

Am I misunderstanding the archaeological reconstruction? How many porticoes are there? 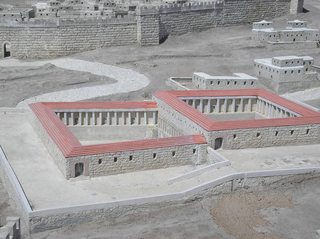 I read this at bible-history.com.
"But recent archaeological discoveries have once again confirmed the Biblical account. In 1956, digging at the ancient Biblical site of Bethesda, archaeologists unearthed a rectangular pool with a portico on each side and a fifth one dividing the pool into 2 separate compartments."

Is it possible that John's description focuses on the porticoes that divide the two pools? And that by identifying it as the one with 5 porticoes he is identifying at which of the two pools the miracle occurred? I find it interesting that the reconstruction results in a there being an upper pool and a lower pool.(ie: creation) From the construction it would seem that the miracle occurred in the lower pool as I assume from the picture that is where the fifth porticoe would have been.

13
Why is the blind man in John 9 sent to the pool that means “sent”?
7
How does John use the Feast of Dedication in John 10?
3
The Healing at the Pool in John 5:1-14
1
In John 9:7 how did the blind man go to the pool of Siloam, after being sent by Jesus to do so when he was blind he couldn't see the way through
1
How did the blind man make his way to the pool of Siloam? The Word says he returned sighted after washing in the pool.
2
Does “all things” always mean the same in these seven verses?
3
What did John mean by “believe” in John 3:16?
6
What did John mean by “second sign” (δεύτερον σημεῖον) in John 4:54?
0
Is John 5:1-15 literal or allegorical?
3
What's the difference between Hebrew and Aramaic?