Tetelestai - What did Jesus really say in John 19:30 assuming he spoke Aramaic or Hebrew?

I have been researching for a long time John 19:30, more specifically the word Tetelestai (τετελεσται) in the Greek. But recently came across the topic of the Hebrew Gospels (possible late translations) and is fascinating.

Note: I am not disputing how the English translations translate Τετέλεσται, but pointing out the secondary meaning of the word Jesus probably used.

The Hebrew word that Τετέλεσται (it is finished) best translates is שָׁלֵם, which is how the Syriac Peshitta* and modern Hebrew** translations translate Τετέλεσται in John 19:30. 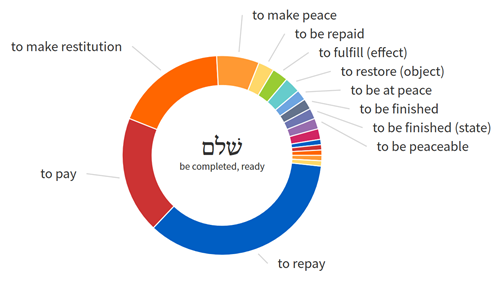 See also In John 20:17 does Jesus intent ἀναβέβηκα to have a secondary meaning related to sacrifice?

Another word often used in place of shalem is "tam/tammim" Both mean a sense of peace and completeness and perfection. A lack of wanting.

Another thought to express the infinitive is in this article: https://www.chaimbentorah.com/2017/08/word-study-it-is-finished/

Using an initial 'mem' as משׁלמ it is stated that it renders 'mashelem' the Pael infinitive in Aramaic.

Other authors propose that the statement was a formalism used by the priest after finishing the sacrifice of the pesach lamb. In that case, it would almost certainly have been uttered in Hebrew.

I have been looking at a (rather severe) criticism of the TPT version with specific regard to John 19:30, and found online that the Peshitta for "finished" is M'SheLeM and in order the better to argue on behalf of Pr. Simmons' efforts I went to my 1923 Berlin edition of Franz Delitzsch and found KuLaH. See the photo here (from a more recent edition that was easier to access. 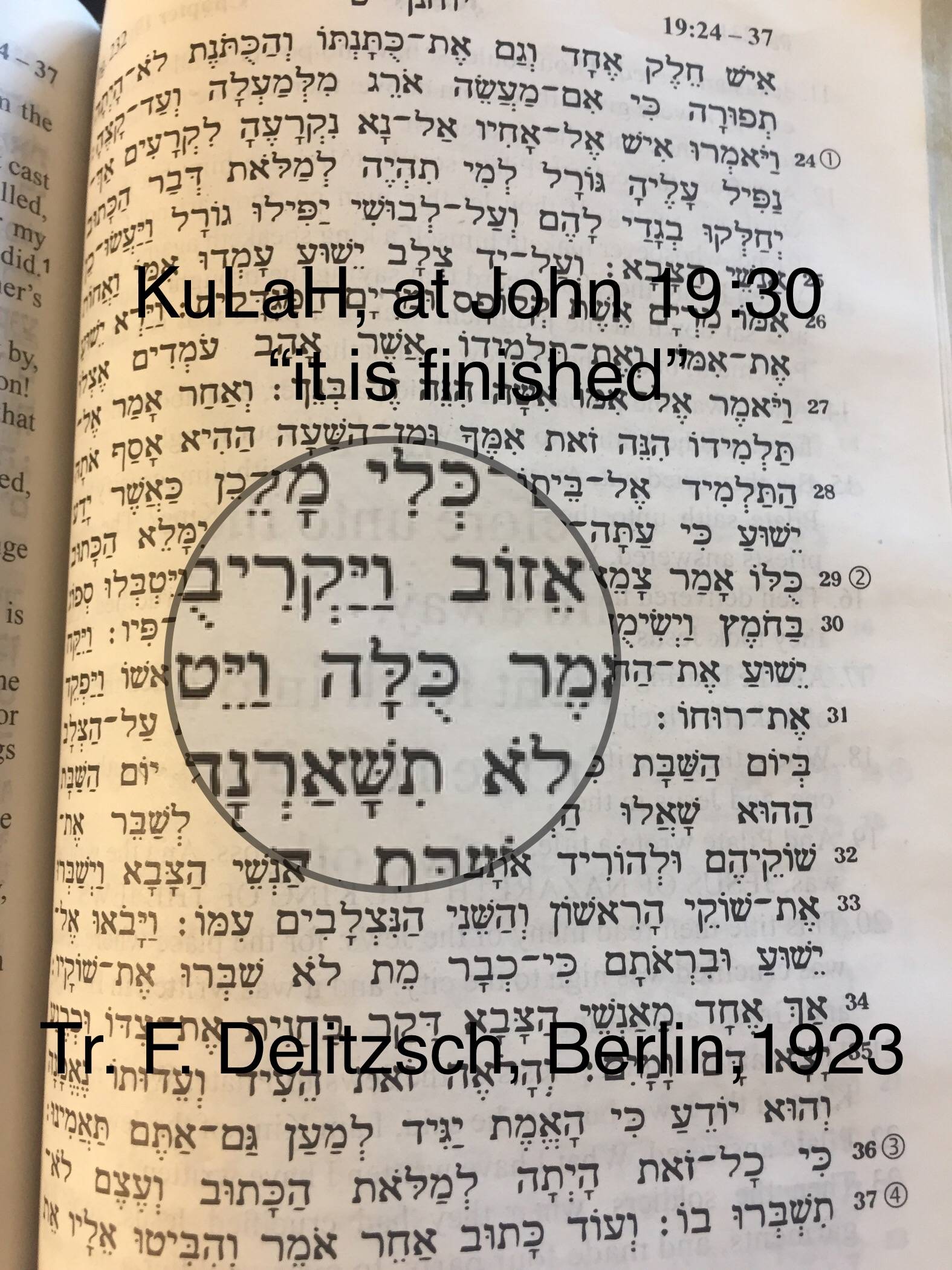 The meaning "it is paid" is what Jesus meant. His sacrifice paid the debt for sin "in full" meaning we are free from this debt by His Blood! It is often misunderstood to mean "it is finished" as in His time here is done, it is over, etc. Truth is Jesus is far more spiritual than this. His concerns were not for His very short and severe suffering but for something far greater, our SOUL!The debt has been paid. The debt of sin is death, not death of the body but death OF THE SOUL! Thus Jesus gave us everlasting life with His final blood sacrifice. He IS The Lamb of God after all!

Another answer inferred that the actual word spoken by Jesus might have been the Aramaic word shlm, based on how the Peshitta translated the Greek text.

A different conclusion might be reached by looking where τετέλεσται is used in the Septuagint, which corresponds with the Aramaic word gemǎr, meaning be complete, perfected, finished.

τετέλεσται is the perfect passive indicative of the verb τελέω.

The only place where this verb appears in the Old Testament (Septuagint) in exactly the same form is Esdras B 7:12 (Ezra 7:12 in translations of the Masoretic Text):

Arthasastha, king of kings, to Esdras, the scribe of the law of the Lord God of heaven, Let the order and the answer be accomplished (Brenton).

According to Tov's Parallel Aligned Hebrew-Aramaic and Greek Texts of Jewish Scripture, τετέλεσται is translating the Hebrew גמר (gmr) which which could support the Masoretic vocalization גְּמַר (gemǎr), which according to other sources2 is an Aramaic word meaning "be complete", "perfected", "finished".1

1 Swanson, A Dictionary of Biblical Languages With Semantic Domains: Hebrew (Old Testament). An alternate vocalization here would be גֹּמֶר (Gomer) - the place - which doesn't fit the context.
2 e.g. Strong's Concise Dictionary of the Words in the Greek New Testament and the Hebrew Bible

Not the answer you're looking for? Browse other questions tagged greek hebrew john aramaic or ask your own question.

22
Was "Τετέλεσται" actually stamped on paid bills and debt certificates in the first century?
13
What does "made perfect" mean in Heb 5:9?
9
Is Jesus against or in favor of the law of retaliation ("eye for eye, tooth for tooth")?
7
John 19:30 - What did Jesus say "was finished"?
5
Is Isaiah 53:5 talking about physical healing or spiritual healing?
4
(John 19:28) All things but scripture complete?
2
How should we understand the connection between Ps 2 and Heb 1, ‘becoming heir’?
2
What does the phrase "Perfect for all time" mean?
2
In John 20:17 does Jesus intent ἀναβέβηκα to have a secondary meaning related to sacrifice?