Then Isaac said to him, "No dew from heaven for you, No fertile fields for you.

And Isaac his father answered and said unto him, Behold, of the fatness of the earth shall be thy dwelling, And of the dew of heaven from above.

Which translations are right (or most accurate) in this verse? The negation type or the affirmation type?

genesis textual-criticism
Share
Improve this question
asked May 14 '20 at 14:15

Basically, the crux of the issue is how the prefixed מ functions in each verse.

In Genesis 27:28, Isaac clearly blesses Jacob, as indicated by the final clause in the verse (“plenty of corn and wine”):

28 Therefore, God shall give you of the dew of heaven, and the fatness of the earth, and plenty of corn and wine.

Here, then, the מ in conjunction with a conjugation of the verb נָתַן (“to give”), is functioning partitively (i.e., “to give part/some of”) 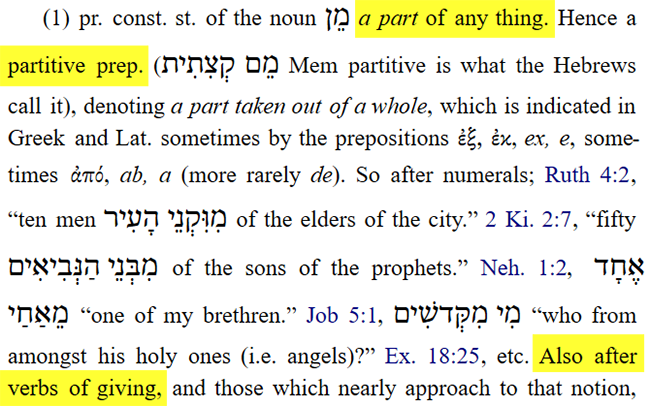 God will give Isaac some (part) of the dew of heaven and fatness of the earth, thus providing him with an abundance of corn and wine.

However, in Genesis 27:39, the prefixed מ is being used locatively, to describe one’s location, or in this case, one’s dwelling, away from some other location (or thing). Gesenius notes that this usage can have the figurative meaning of “without” (i.e., privative).

Instead of being used with the verb נָתַן (natan), it is being used with יִהְיֶה (yiyeh), a conjugation of הָיָה (hayah), “to be.” These two verbs dramatically change the function of מ in each verse.

Jacob is blessed; Esau is cursed.3 Note Carl Keil’s commentary on this verse:4

“Behold,” so reads his saying, “your dwelling shall be without the fat fields of the earth and without the dew of heaven from above.” By a play-on-words, Isaac uses the same expression, מִשְׁמַנֵּי הָאָרֶץ [“from the fatness of the earth”] and מִטַּל הַשָּׁמַיִם [“from the dew of heaven”], as v. 28, but in the opposite meaning, מִן there in a partitive [sense], here in a privative sense: away from, without. The context requires the words to be comprehended thus, and not with the Vulgate, Luther, et al.: “your dwelling shall be of the fat of the earth and the dew of heaven.”

Since Isaac (v. 37) has allocated to Jacob the blessing of the super-abundance of corn and wine, he can’t possibly afterwards promise Esau the fat fields and the dew of heaven. Nor would these even suit the following words at all, “You shall live by your sword.” The privative sense of מִן, by the way, is genuinely poetical (cf. 2 Sam. 1:22; Job 11:15, etc.). Therefore, the saying contains the thought [that] Esau’s dwelling would be the opposite of the blessed land of Canaan; it would be an unfruitful land.

1 Gesenius, p. 481, מן (min), 1
2 id., p. 483, מן (min), 3, b
3 Well, I guess that is all relative. Living in such lands, away from bountiful resources, Esau will develop the ability to survive in harsh conditions, to become resourceful. On the other hand, living in bountiful lands, Isaac’s land will become the envy of many people, thus causing him to often defend it from those wishing to take it for theirselves.
4 Keil, p. 278

From the Pulpit Commentary Verse 38

Let people serve thee (literally, and will serve thee, peoples; at once a prayer and a prophecy; fulfilled in the political subjection of the Moabites, Ammonites, Syrians, Philistines, and Edomites by David; the thought being repeated in the next clause), and nations bow down to thee (in expression of their homage): be lord over thy brethren, - literally, be a lord (from the idea of power; found only here and in ver. 37) to thy brethren. Imminence among his kindred as well as dominion in the world is thus promised - and let thy mother's sons bow down to thee (a repetition of the preceding thought, with perhaps a hint of his desire to humble Jacob, the favorite of Rebekah): cursed be every one that curseth thee, and blessed be he that blesseth thee - framed on the model of the Abrahamic benediction (Genesis 12:3); but not so full as that, either because Isaac felt that after all Esau was not to be the progenitor of the holy seed (Murphy), or because, not being actuated by proper feelings towards Jehovah and his promises, the patriarch could not rise to that height of spiritual benediction to which he afterwards attained - Genesis 28:3, 4 (Keil), or because the prerogative of pronouncing the Abrahamic blessing in all its fullness Jehovah may have reserved to himself, as in Genesis 28:14 ('Speaker's Commentary').

And Isaac his father (moved by the tearful earnestness of Esau) answered and said unto him,—still speaking under inspiration, though it is doubtful whether what he spoke was a real, or only an apparent, blessing—(vide infra)—Behold, thy dwelling shall be the fatness of the earth, and of the dew of heaven from above. Literally, from ( מִן) the fatnesses (or fat places) of the earth, and from the dew of area; a substantial repetition of the temporal blessing bestowed on Jacob (Genesis 27:28), with certain important variations, such as the omission of plenty of corn and wine at the close, and of the name of Elohim at the commencement, of the benediction (Vulgate, Luther, Calvin, Ainsworth, Rosenmüller, 'Speaker's Commentary'); though, by assigning to the preposition a privative rather than a partitive sense, it is readily transformed into "a modified curse"—behold, away from the fatnesses o/the earth, &c shall thy dwelling be, meaning that, in contrast to the land of Canaan, the descendants of Esau should be located in a sterile region (Tuch, Knobel, Kurtz, Delitzseh, Keil, Kalisch, Murphy). In support of this latter rendering it is urged

Not the answer you're looking for? Browse other questions tagged genesis textual-criticism or ask your own question.