When was the Book of Ruth set?

"In the days when the judges ruled,[a] there was a famine in the land. So a man from Bethlehem in Judah, together with his wife and two sons, went to live for a while in the country of Moab."- Ruth 1:1

So when exactly during the era where the judges ruled (I'm assuming that these are judges from the Book of Judges) did the events of the Book of Ruth occur? Were they some time after the Battle of Gibeah?

I'm surprised that there's little extrabiblical Jewish commentary on this.

judges chronology ruth
Share
Improve this question
asked May 4, 2020 at 4:43

In general, the era of the "judges" is the period between Joshua's conquest of Canaan, and the founding of the Israelite monarchy, initially under King Saul, approximately 350 years. The final Judge was Samuel who anointed both King Saul and King David.

From Matt 1:5 we discover that Boaz' mother was Rahab, almost certainly the Rahab of Jericho, This Rahab obviously married Salmon (Ruth 4:12, 1 Chron 2:11).

Thus, it appears that the story of Ruth was early in the period of the judges (Ruth 1:1), after the conquest of Jericho.

The timing of the battle of Gibeah (Judges 19-21) is unknown but much debated.

The only thing that can be given is an educated guess based on all known data. If there is a slice of extra unknown data (such as extra links in the genealogy from Salma to David), then trying to guess at all with certainty is pointless. However, this portion of David's genealogy back to Salma is recorded four times in the scriptures (In Ruth, In Chronicles, In Luke & in Matthew) which is plenty of opportunities to add in extra links in the genealogy if they existed, remember, "at the mouth of two or three witnesses every matter is to be established" (Matthew 18:16), and here we have 4 witnesses saying the same thing. Therefore guessing based on everything we know should give us as close to a right answer as we can get (based on all available data).

For the full answer

I have already written a document which deals with this question in high detail on page 39 (https://www.academia.edu/45586301/The_Judges_Chronology_Solved_at_Last), so I won't repeat myself here, but I will give a general summary. But I would recommend going to that document to work through the methodology for this and the whole Judges period (If you download the document you can view all of the graphics in glorious HQ).

Firstly we have two questions to address in order to synchronize our data 1) When do all the events of Judges take place? 2) Roughly when should the 11 years recorded in the book of Ruth take place? Then if we line them up side by side we can find the nearest oppression to when Ruth roughly takes place.

1) When do all the events of Judges take place?

The common mistake people make when analyzing this period is to simply assemble a Chronology that works, rather than looking for the clues Samuel lays out to come to his intended Chronology. Alternatively, some will make baseless assertions (such as "Perhaps the 480 years at 1 Kings 6:1 excludes all of the oppressions" or "Maybe there are two separate Lines from start to finish"). However, We can't simply make up rules when there is nothing in the text to back those ideas up. If the text doesn't state it, then do not go beyond what is written in the text.

Now the problem based on 1 Kings 6:1 (once Kingships, Conquest and Wilderness wanderings have been deducted) is that we have 350 years for the time period, yet (once we've added in the additional data from the first 7 chapters of 1 Samuel) we have 450 years of data to fit within this time period. So which is overlap data and which is chronological data?

Confusion comes when people conflate the Judgeship data with Rest data (based on Judges 2:18), however it should be noted that the verse prior states that the people would refuse to listen even to the Judges on some occasions, so verse 18 should be taken as a guideline, not a rule (although as I go on to show, they may still have had regional rests with the Judgeship data). Nevertheless, we have the question, does Samuel always use the Judgeship data set to progress the chronology? For the following 4 reasons, i have concluded no (please see the document for a full breakdown of each):

Given enough scriptural information to support the idea that Judgeship data is simply overlap data, once dropped from the Chronology, and using Judges 11:26's anchor point, you get the following: 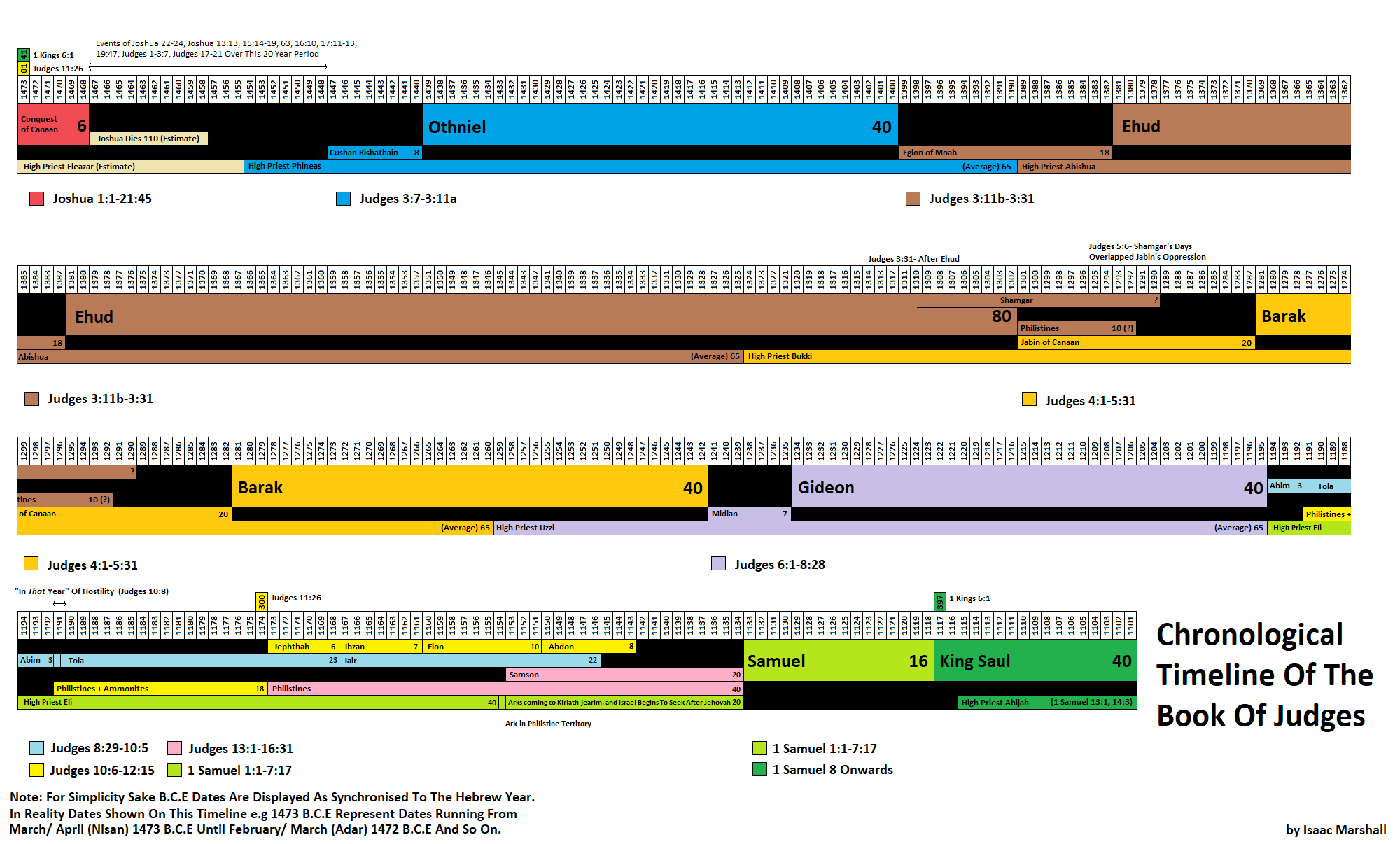 Note: The Specific Years I am using on here may be different to what others may use. This is unimportant for the purposes of this. What is important is how the data relates to itself

This neatly gives us 20 years before Judges period to Joshua, and 16 years afterwards until Saul.

2) Roughly when should the 11 years recorded in the book of Ruth take place?

Using what we know about each link in the chain (Boaz isn't "Young" Ruth 3:10, Jesse was already old in the days of Saul and then lived roughly 25 years into David's life 1 Samuel 17:12, 1 Samuel 22:3,4) we can create some rough scenarios, some more likely than others, for when Obed would be born, which is at the end of the 11th year of the account, and from this create a time range for when he was born. For the specific scenarios and calculations, please see the document. From this we get a roughly 53 year window within which he could be born, starting either 35 years into Ehud's 80 years of rest and ending 8 years into King Jabin of Hazor's oppression.

Next, if we see which deliverance from an oppression is the closest to these dates, and add one year to it to give us the ending for the main events of Ruth. This is under the assumption that the 10 years of famine within the book of Ruth (Ruth 1:1,4) is down to Israel's disobedience (see Deuteronomy 11:11-17 and 28:11,12, 24, 33, 38 and 51) and therefore overlapped the final 10 years of an oppression (although this reasoning isn't 100% certain, again see document). The earliest date is 35 years after Ehud's deliverance from Moab, which would make 273 years for Obed and Jesse, making each 136.5 years begetting age until David was born. This is unlikely. Next is the end of Jabin's oppression, which makes Obeds birth 14 years after the 53 year window. It gives a better begetting age for Obed and Jesse (86.6 years each), however it makes Boaz 117. Unlikely but not impossible. But we can still do better.

In Judges 4 & 5, if we pay attention to the geography of the account, the battle is happening in the north of Israel. We also find that every tribe of Israel is involved in the deliverance from King Jabin (and even a cursed town of Meroz for refusing to help), with the exception of Judah & Simeon. These two are noticeably absent. And where is the book of Ruth taking place? in Bethlehem in Judah. Why were these two tribes absent? These southern tribes were absent because they had already suffered an oppression during Jabins 20 years, that of the Philistines in Judges 3:31 (of unstated length), and were delivered by Shamgar. Additionally, Shamgar is mentioned in Judges 5:6 being used to show how deserted the roads and villages were in Israel during Jabins 20 year period. What time of year did Shamgars deliverance take place? His implement of deliverance, the Ox Goad, was a tool used in the plowing season to guide Oxen so that they would make straight dirt tracks in order to sow seed in them. So if Southern Israel had repented and was sowing seed when the Philistines (also southern based) came against them, Shamgar would use what was on hand (because weapons were scarce in those days according to Judges 5:8) and so once they were delivered, their recently sowed crops would grow in abundance, leading to Naomi hearing about it and returning to Israel for the start of the Harvest because "she had heard in the field of Moʹab that Jehovah had turned his attention to his people by giving them bread." (Ruth 1:6) So Southern Israel would enjoy relative rest during the 20 years of oppression in the north. If we synchronize the 10 years of famine with the start of Jabins oppression, Obed would be born 4 years after the 53 year window based on mathamatical averages (closer to the likeliest scenario too I would add), which would make Boaz 107 when Obed was born, Obed 98 when Jesse was born, and Jesse 85 when David was born, although this isn't the only mathematical option for their ages, just an educated guess. The data would look as follows: 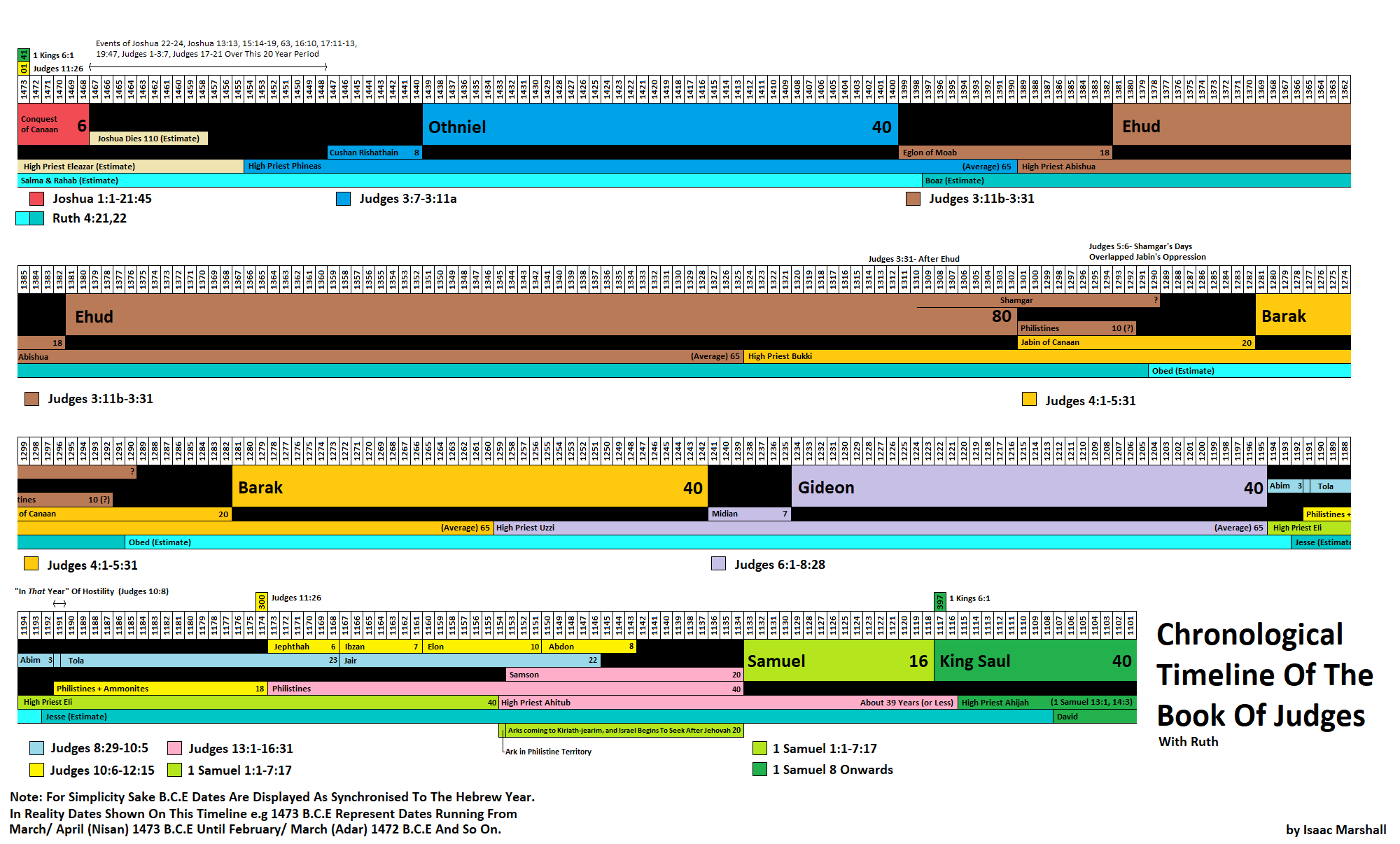 This is a ridiculous amount of information to try and condense into a short post, so I would recommend the linked document which goes through it in a bit more of a logical and detailed manner. There are also longform versions of the graphics with info-boxes. I hope it makes sense.

So when exactly during the era where the judges ruled did the events of the Book of Ruth occur?

Definitely after the battle of Gibeah, which would have occurred after Joshua's death yet before the first oppression. If the 70 deaths in Judges 9:18 was enough to break a period of rest, then the 65,100 who died during Judges 20 would have certainly broken any rest period. Additionally, since The Israelites had the freedom to assemble, this would seem to rule out this account taking place during a period when they were oppressed by one of their enemies (either Cushan or Eglon since Phineas is the high priest). This would point to these events at Gibeah taking place at least 145 years before the book of Ruth begins.

Not the answer you're looking for? Browse other questions tagged judges chronology ruth or ask your own question.

2
Is the 480 years mentioned in 1 Kings 6 accurate?
2
Was Rahab the Harlot contemporary with Salmon?
0
Is there a chronology issue in the book of Judges?

12
When was the book of Joel written?
9
When was Ruth written?
17
Why didn't Naomi know Ruth? (Ruth 3:16)
7
Why would marrying Ruth have impaired the Redeemer's inheritance?
1
Timeline of the story of Ruth
4
Was it common to have famine?
2
Was Ruth barren like Sarai?
1
Did Ruth take a break from gleaning in the shelter in Ruth 2:7?
1
When was the Book of Micah written?