That in the name of Jesus every knee should bow, of those that are in heaven, on earth, and under the earth:

Is "under the earth" a metaphor?

If it is a metaphor, then why not "in heaven" is also a metaphor?

If "under earth" and "in heaven" are both metaphors, thus why not "on earth" is also a metaphor?

I mean that there are three classes of human beings: Spiritual, Bodily and Soulish. Thus, in heaven, on earth, under earth are metaphors for these three types, i.e: all three types are human beings living on earth.

And every creature, which is in heaven, and on the earth, and under the earth, and such as are in the sea, and all that are in them: I heard all saying: To him that sitteth on the throne, and to the Lamb, benediction, and honour, and glory, and power, for ever and ever.

I hope that the question is clear. I hope my point of view is clear.

In Biblical cosmology the earth or eretz in Hebrew is a plane that is covered by a dome and the underworld or Sheol is under the earth. Water surrounds the whole structure and above that is the third heaven where the unseen God resides.

So when it speaks about under the earth it literally means below the dirt. 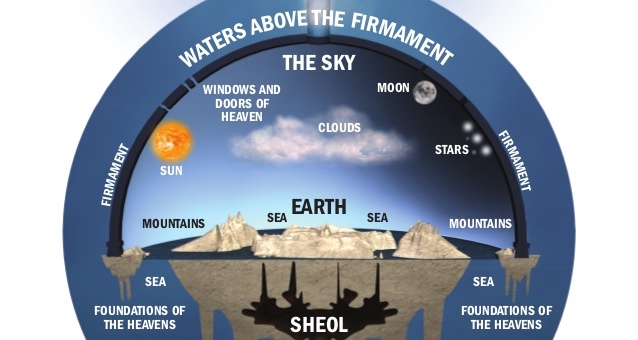 The Phrase "under the earth" in many cases is simply a reference to things that are in the soil below ground level such as:

Thus, there is little mystical or mythological about such references and show the simple understanding that is obvious to everyone that there are things that exist below the ground level.

However, when this phrase, "under the earth" is coupled with other such as "heaven and earth" we get what some call a merism signifying "everything" or "every creature" or "everyone", depending on the context. Here are some further examples:

Understood this way, there is no need to assume much about ancient Hebrew cosmology (the Hebrews were very uncomplicated practical farmers). Therefore, I would not try to separate part of an idiom from the rest of it.

Most languages, including English have a construction called a "hendiadys". here are some examples:

After his resurrection and just prior to ascending to God's heavenly courts, Jesus told his disciples: "All authority has been given me in heaven and on the earth." (Matt. 28:18)

Similarly, Paul wrote that God granted the faithful resurrected Jesus a highly exalted position and a name which is above every other name.

9 "For this reason also, God highly exalted Him, and bestowed on Him the name which is above every name, 10 so that at the name of Jesus every knee will bow, of those who are in heaven and on earth and under the earth, 11 and that every tongue will confess that Jesus Christ is Lord, to the glory of God the Father."

For "every knee will bow," in Jesus’ name means recognizing his position and acknowledging him as Lord to God’s glory. This includes "those under the earth"(ground) evidently showing that those resurrected from the grave will also come under this requirement.

Those resurrected will be required to be obedient to the laws then in force and will be judged "out of those things written in the scrolls according to their deeds." (Revelation 20:12) The "books/scrolls" apparently represent God’s revelation of his will for humankind during that thousand-year period.

9 "He made known to us the mystery of His will, according to His kind intention which He purposed in Him 10 with a view to an administration suitable to the fullness of the times, that is, the summing up of all things in Christ, things in the heavens and things on the earth. In Him.

Those 3 locations, for God's creatures, aren't metaphors. There's a lot of people in the last 2. Paul had no need to use any metaphor there, and that would've been a wild one. As far as 'spiritual, soulish, and fleshly/fleshy': Paul uses those adjectives, as in 1 Corinthians 2--3, to describe Christians, believers into Christ. Regarding maturity. Whether they live by the Spirit of Christ in their spirit, or not. You can comprehend Him only by faith, Mr Salah, by believing into Jesus Christ, to receive Him as your life and be justified. Just call 'O Lord Jesus!' Call upon His name.

By definition, all unbelievers are the latter 2, with an emphasis on flesh. To say, as John the apostle wrote, that 'the Word became flesh,' means that God didn't become sinful, but God became man, in the appearance of sinful flesh. For the purpose of crucifying it and resurrecting in it. Both to become the Vaccination to the global pandemic of Death, and also to fulfill God's original eternal purpose, of having a Bride for His Son, of having many sons as His eternal family, expressing and living by Christ His Firstborn.

Not the answer you're looking for? Browse other questions tagged philippians or ask your own question.