It's fairly common knowledge that there are four Greek words for love, but it's not clear from the Wikipedia article whether certain distinctions persist from Ancient Greek to Koine, namely the distinction between ἀγάπη (agape) and φιλία (philia).

This is a broader form of this question, but is there any distinction in the Fourth Gospel (or the broader body of Johannine literature) between the author's use of ἀγάπη and φιλία?

A survey of the uses of these words in Johannine literature will be conducted.

Here is a Bible word study showing all of the words in the Greek that were translated into English as "love" in the NASB translation6 of Johannine literature and their frequency of occurrence: 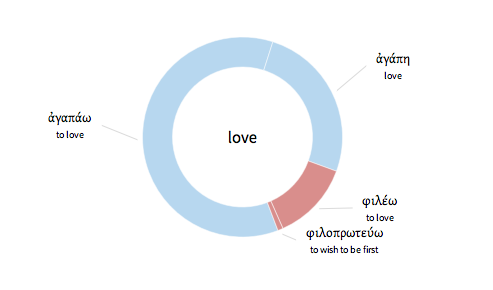 The verb φιλοπρωτεύω appears in the above diagram, and it means "to have a special interest in being in the leading position, wish to be first, like to be leader" (cf. 3 John 9).7 It does not inherently mean "to love," but is often translated as "loves to be first," hence its appearance in this chart (which begins with the English word "love" and works backwards to the Greek). Another common word for love, ἔρως (eros, erotic love), is not used in Johannine literature. The word στοργή (storge, familial love) means "affection" in modern Greek and is included in the link you referenced, but it does not appear in Johannine literature. Its only appearance in the New Testament is as a compound word with φιλέω: φιλόστοργος (philostorgos, loving dearly / mutual love) in Romans 12:10.

A textual example where both ἀγαπάω and φιλέω occur in the same context is in John 21:15-17, which has been covered in another question which you referenced. Addressing the use of both verbs in this context as well as in several others, user swasheck writes:

To force ... a distinction between ἀγαπάω and φιλέω is disingenuous. There are places where this distinction is inappropriate (2 Sam. 13:4 Amnon ἀγαπῶ Tamar, John 5:20 The Father φιλει The Son, 2 Tim. 4:10 Demas αγαπησας the present world, 1 John 2:15 Do not αγαπατε the world, John 3:19 the men ἠγάπησαν the darkness).

An alternative solution is that in this instance, the author was attempting to use variety within the text, assigning words to operators in order to maintain a clear narrative that comes to a satisfying conclusion.

There appears to be little difference in meaning between the two words.

2 I obtained these results (and all other search results in this response) by conducting a morphology search in Logos Bible software (v5) for the lemma in Johannine literature within the 27th edition of the Nestle-Aland Greek New Testament, utilizing Logos Greek Morphology.

4 I compared the NET, NKJV, and ESV translations of these verses (here and for all other English translation comparisons in this response).

6 I also checked the ESV and NKJV and had similar results.

Jesus' love for the beloved disciple:

John 13:23 - One of them, the disciple whom Jesus loved, was reclining next to him.

John 20:2 - So she came running to Simon Peter and the other disciple, the one Jesus loved, and said, "They have taken the Lord out of the tomb, and we don’t know where they have put him!"

The Father's love for the Son:

John 5:20 - For the Father loves the Son and shows him all that he himself is doing. And greater works than these will he show him, so that you may marvel.

The love of sinful things:

1 John 2:15 - Do not love the world or the things in the world. If anyone loves the world, the love of the Father is not in him.

Revelation 22:15 - Outside are the dogs and sorcerers and the sexually immoral and murderers and idolaters, and everyone who loves and practices falsehood.

The Father's love of Jesus' disciples:

1 John 4:10 In this is love, not that we have loved God but that he loved us and sent his Son to be the propitiation for our sins.

John 16:27 - for the Father himself loves you, because you have loved me and have believed that I came from God.

Given these pairings, there is not warrant for a clear distinction between the two terms or word groups within John's writings. Of course, there may still be distinctions in some cases, but these distinctions are better teased out in context. It's not enough to know simply which word was used. For this reason, I leave aside the uses of both word groups in Peter's reinstatement; though personally I think the uses there also point in the same direction as the other pairings here.

All quotations from ESV

Not the answer you're looking for? Browse other questions tagged greek john word-study love or ask your own question.