To whom does the anointed refer in 1st Chronicles 16:22?

Do not touch My anointed ones, And do My prophets no harm. — NASB

The phrase seems to be a quote pulled from an unknown source, used to illustrate the context, that God protects Israel and delivers His people from its enemies. Thus it seems that, in this context, the "anointed ones/prophets" is a reference to the people as a whole.

Can anyone with access to a well respected commentary of 1st Chronicles confirm or deny this or perhaps share some arguments from professional exegetes?

The context for 1 Chronicles 16:22 is, obviously, 1 Chronicles 16. This is the Chronicler's account of David's finally successful efforts to bring the Ark to Jerusalem, expanded over the parallel version in 2 Samuel 6. One of the most striking differences is that the Chronicler supplies the song that was sung as the Ark processed into Jerusalem. It is made up of three different passages from the Psalms:

Since Chronicles is widely regarded as fairly late,1 the "psalm" of 1 Chronicles 16 is regarded as a pastiche, put together for this setting in Chonicles.2

This implies that the verse in question, 1 Chr 16:22 has not one context, but two, since the "original" setting in the Psalms comes into play as well.3

For comparison's sake, it's worth setting out the (now two) key verses together:

So they are, in fact, almost identical (except for the preposition be- in 1 Chronicles 16, instead of the more common le- as in Psalm 105).4

In either setting, the immediate context (sometimes referred to as "co-text", to distinguish the immediately adjacent material from the broader literary setting) is a historical reflection on the LORD's magnanimous and saving acts on behalf of his people. Psalm 105 tells this as an item of thanks and praise (the counterpart in Psalm 106 rehearses this story as an occasion for confession).

1 Chr 16:22 //5 Ps 105:15 finds its place between the mention of the patriarchs Abraham, Isaac, and Jacob which precedes, and the beginning of the Joseph reminiscence which follows. That "pin-points" the narrative moment of "wandering" (1 Chr 16:20 // Ps 105:13) to the movements of the patriarchs through Canaan, down to Egypt, and back again, as narrated in the book of Genesis.

The question of the "prophets" suggests a connection to Abraham, in the first instance, since in Genesis 20:7 he is referred to this way, when God informs Abimelech in a dream:

Now therefore restore the man's wife; for he is a prophet [כִּי־נָבִיא הוּא], and he shall pray for you, and you shall live; and if thou restore her not, know that you shalt surely die, you, and all that are yours.

This is just one, however, and the psalm speaks in the plural. Biblical tradition (as far as I'm aware) does not refer to the other patriarchs as "prophets", but this designation was used more broadly in later times. Both Isaac (in Genesis 27) and Jacob (in Genesis 49) pronounce in a "prophetic" way, but without it being designated as "prophecy", or them as "prophets".

Which brings us, finally, to the main interest, the "anointed ones", altogether more difficult, because this is not a designation that is otherwise known for the patriarchs, but is normally reserved in the Hebrew Bible for priests and kings. Genesis 23:6 has the Hittites recognizing Abraham as a "prince of God" (נְשִׂיא אֱלֹהִים) but that stops short of kingship, and there is no anointing.

Some connections are sometimes drawn to explain the force of being among the LORD's anointed, e.g. in 2 Sam 1:14, 16 where David articulates the principle that the LORD's anointed should not suffer violence, an implication of the present Psalms/Chronicles setting as well.

This enigmatic verse has taxed commentators over the centuries. There are often resonances between interpretations not only from different periods, but also from different traditions.

Rashi offers different comments on this text in Chronicles and Psalms. For Chronicles he ties this to events in the lives of the patriarchs:

Do not touch My anointed ones, and do not harm My prophets: Concerning Abraham it says (Gen. 12:17): “And the Lord plagued Pharaoh,” and it is written (ibid. 20:3): “And the Lord came to Abimelech in a dream at night and said to him: You shall die, etc.” Concerning Jacob it says: (ibid. 31:24): “And God came to Laban the Aramean in a dream at night, and said to him: Beware, etc.” And further, concerning Jacob, when they came to kill him because they killed Shechem and Hamor, it is written: (ibid. 35: 5): “Then they journeyed on, and the terror of God was, etc.” The Book of Psalms is more explicit, for the psalm does not terminate here, as it is written there (105:16): “He called a famine upon the land,” in order to exile them to Egypt.

Here Rashi gives attention predominantly to the aspect of divine protection, and note that he points explicitly to the Psalm where the "story" continues. In the his Psalms commentary, he offers a much shorter comment, taking a slightly different perspective:

My anointed ones: My great ones. Every [expression of] anointing is an expression of rulership and greatness.

They are called מְשִׁיחִים (a passive form) as being God-chosen princes...

Returning to the Chronicles context, the much more recent and magisterial commentary by Sara Japhet6 (1993) picks out this detail for comment (p. 319):

... 'my anointed ones' is most unusual. None of the patriarchs is ever referred to in this way; this is the only biblical reference to the title in the plural, and the only place where 'prophet' and 'anointed one' are found in parallel colons.

The phrase 'anointed one', however, referred only to kings or priests. This context represents a twofold expansion in the application of the title: a full parallelism between 'prophet' and 'anointed one' (probably also in the Damascus Covenant, 5.21-6.1), and in the inclusion of the three patriarchs in the category of prophets.

In the context -- of Chronicles in particular -- this odd designation of the patriarchs points suggestively to the context of the psalm itself, in the liturgy of the temple under royal and priestly patronage.

The struggle of commentators through the ages, continuing to BH.SE in the present day, is to understand what prompted the Psalmist (and Chronicler) to use such an unusual designation for the patriarchs. In fact, the one thing to emerge with clarity from this exercise is that the "anointed ones" does, in fact, refer to the patriarchs, in direct answer to OP's question. Why, and with what import ... that remains elusive. 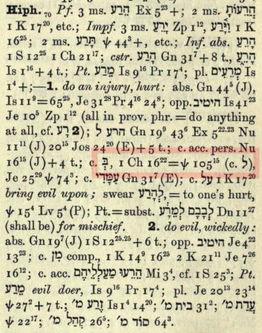 Not the answer you're looking for? Browse other questions tagged 1-chronicles or ask your own question.

10
What does "The psalms of David are ended" refer to?