"Then he threw down the pieces of silver in the temple and departed.." Matthew 27:5 N.K.J.V.

But naon Luke 1:9 The sanctuary and the Holy of holies. Thayer. 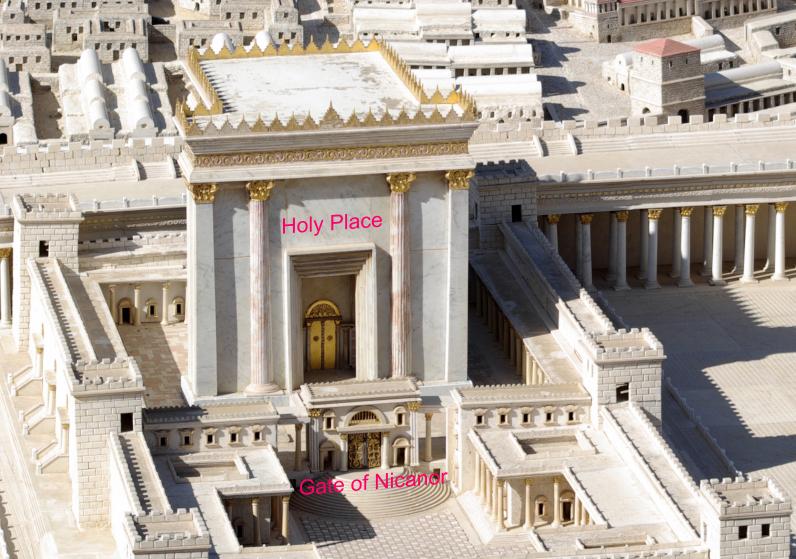 1And he looked up, and saw the rich men casting their gifts into the treasury. 2And he saw also a certain poor widow casting in thither two mites. 3And he said, Of a truth I say unto you, that this poor widow hath cast in more than they all:
4For all these have of their abundance cast in unto the offerings of God: but she of her penury hath cast in all the living that she had.
-- Luke 21:1-4 (KJV)

Since the widow cast her two mites into the Treasury, then "The Treasury" could not have been beyond the Gate of Nicanor where only Israeli men had access.

John records that after the incident with the woman caught in adultery, Jesus continued talking with the Pharisees:

12Then spake Jesus again unto them, saying, I am the light of the world: he that followeth me shall not walk in darkness, but shall have the light of life.
...
20These words spake Jesus in the treasury, as he taught in the temple: and no man laid hands on him; for his hour was not yet come.
-- John 8:12,20 (KJV)

John is indicating here that "The Temple" includes "The Treasury", since Jesus said these words "in the treasury, as he taught in the temple", but the "The Treasury" as shown above could not have been within what Thayer considered to be "The Temple", i.e. the area beyond the Nicanor Gate.

After Judas cast down the money in "The Temple":

... the chief priests took the silver pieces, and said, It is not lawful for to put them into the treasury, because it is the price of blood.
-- Matthew 27:6 (KJV)

It is very likely that Judas' casting down of the money took place in the vicinity of "The Treasury", which couldn't have been near the Holy Place since the Holy Place was beyond the Gate of Nicanor, beyond the Court of the Israelites in an area of the Temple to which only the priests had access.

a place or structure specifically associated with or set apart for a deity, who is frequently perceived to be using it as a dwelling, temple.

ναός (naos) occurs 45 times in the NT and can be classified (according to BDAG) as follows: