When should names (people and places) be translated versus transliterated? [closed]

Ask Question
Asked 4 months ago
Active 4 months ago
Viewed 43 times
1
Closed. This question is opinion-based. It is not currently accepting answers.

In the world of the Old Testament, would people have thought of "I'm going down to En-Gedi" or would they have thought "I'm going down to Young Goat's Spring". Similarly would people have thought "There's Adam" (thinking the sound) versus "There's Man" or any other name. Did the Hebrews think of names as just sounds attached to a particular person or place, or would they have acknowledged the meaning? Why do some translations translate certain words and others transliterate them? Why are some places translated while others are transliterated?

Since all the names appear significant, I began a translation that translated the names (people, places) at [least at] their first mention, with the transliteration or name in brackets. That could be done by footnote too. I understand the first meaning of Hebrew 'man/adamah' is 'red clay,' so that would be my first-mention. In that case: then 'man,' then the capitalized name 'Adam' later

Thanks for the question that lead to an interesting find.

What's in a name 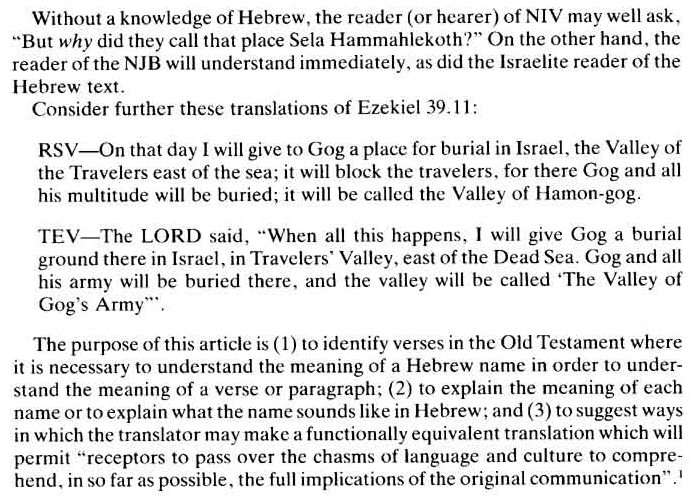 The excerpt below (p. 119) offers an answer as to when translation is preferred over only translit.

Not the answer you're looking for? Browse other questions tagged greek hebrew hebrew-bible onomastics or ask your own question.