Why is the word "Christ" missing in Matthew 23:8 in some translations?

8 >But do not be called Rabbi; for One is your Teacher, and you are all brothers.

8 But be not ye called Rabbi: for one is your Master, even Christ; and all ye are brethren

8 “But you are not to be called ‘Rabbi,’ for you have one Teacher, and you are all brothers.

Why is Christ missing in these translations?

It is an interpretational decision made by the translators for the different versions. There are many ancient manuscripts of the New Testament and they don't all match perfectly - for various reasons. Often a scribe that is copying a manuscript will add a word or phrase in an attempt to clarify something. It is rare that a scribe will remove something while copying - but it has probably happened here and there.

In this case, some versions of the Greek texts have the word for "Christ" - Χριστός- while others don't. Since it is doubtful that a scribe would remove the word Christ - it is probably thought that it would have been a later addition intended to clarify the verse.

Here is a screenshot from Biblehub.com - I have highlighted the word for Christ: 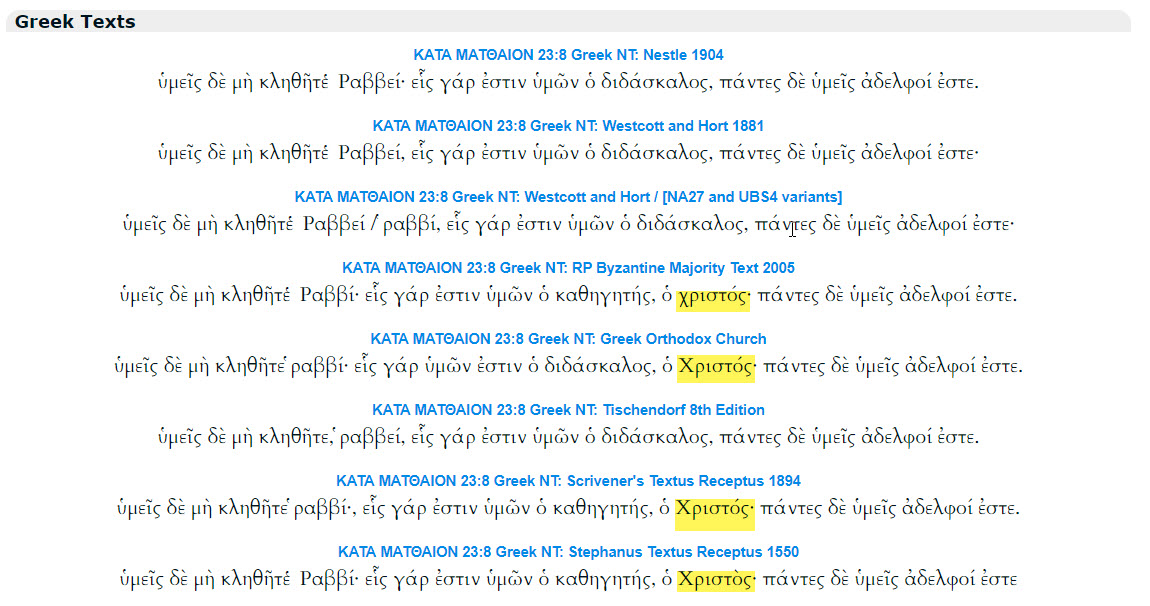 So now the committees at the bible version - say NIV or KJV - have to decide which Greek translation they are going to use. Some committees will attempt to remain consistent with one Greek manuscript or family of manuscripts. Often - at least with the NIV they will add a footnote if there are other manuscripts that differ.

The most famous example of this is found in Mark 16. You can see in this photo how the NIV distinguishes the text from verse 9 onward:

Not the answer you're looking for? Browse other questions tagged matthew textual-criticism translation-philosophy gospels or ask your own question.

9
Why do different English translations differ on Matthew 24:36?
5
What does Jesus mean by "father" In Matthew 23:9?
2
Why do some versions have "Christ" in 1 Peter 3:15 while others have "God"?
5
Isaiah 12:2: Why do some translations use 'song' and others use 'defence'?
6
Why is John 5:4 missing in the NIV?
7
Why is the phrase 'not being myself under the law' missing in 1 Corinthians 9:20 in the KJV?
1
Why do English bibles remove the word “Jesus” from “Jesus the Christ” in Matthew 16:20?
2
Some translations have a longer version
1
Why does Proverb 22:20 say "thirty sayings" in some translations and "excellent things" in others?
2
Teacher vs Instructor