What does the Gesture of "uncovering feet" and "laying to Boas feet" mean?

When he gets ready to go to sleep, take careful notice of the place where he lies down. Then go, uncover his legs, and lie down beside him. He will tell you what you should do.”

I don't understand the action of uncovering his legs/feet and lying down beside him.

What exactly does that gesture mean in that time and age?

My own interpretations options with my limited experience:

Thank you for your help.

What does the Gesture of “uncovering feet” and “laying to Boas feet” mean?

What exactly does that gesture mean in that time and age?

According to the footnotes, Ruth 3:4 NET Bible, the actions of Ruth constitute a marriage proposal,which read.

While Ruth and Boaz did not actually have a sexual encounter at the threshing floor, there is no doubt that Ruth’s actions are symbolic and constitute a marriage proposal.

3 "At that time, Naomi, her mother-in-law, said to her, “My daughter, I must find a home for you so you will be secure.[b] 2 Now Boaz, with whose female servants you worked, is our close relative.[c] Look, tonight he is winnowing barley at the threshing floor.[d] 3 So bathe yourself,[e] rub on some perfumed oil,[f] and get dressed up. Then go down[h] to the threshing floor. But don’t let the man know you’re there until he finishes his meal.[i] 4 When he gets ready to go to sleep, take careful notice of the place where he lies down. Then go, uncover his legs,[k] and lie down[l] beside him.[m] He will tell[n] you what you should do.” 5 Ruth replied to Naomi,[o] “I will do everything you have told[p] me to do.”

10" He said, “May you be rewarded[ah] by the Lord, my dear![ai] This act of devotion[aj] is greater than what you did before.[ak] For you have not sought to marry[al] one of the young men, whether rich or poor.[am] 11 Now, my dear, don’t worry![an] I intend to do for you everything you propose,[ao] for everyone in the village[ap] knows that you are a worthy woman.[aq] 12 Now yes, it is true that[ar] I am a guardian,[as] but there is another guardian who is a closer relative than I am. 13 Remain here tonight. Then in the morning, if he agrees to marry you,[at] fine,[au] let him do so.[av] But if he does not want to do so, I promise, as surely as the Lord lives, to marry you.[aw] Sleep here until morning.”"

Initially, your question perplexed me. After delving into this beautiful love story I was still none the wiser. Why uncover his feet? Was there some significance about this single act? Four hours later, after immersing myself in this story, I gave up. There was no obvious explanation to be found in the Bible. However, I think I should share with you what I found, and then my conclusion at the end...

Boaz is a middle-aged, well-to-do- Israelite. Ruth and her mother-in-law Naomi are both widows and must fend for themselves because they have no Jewish husbands or sons to take care of them. Ruth first encounters Boaz when out in the fields, gleaning. Although Ruth is from Moab, Naomi is a Jewess and she knows about the Leverite law on the obligations of kinsmen (Genesis 38:13-30).

On the basis of Hebrew law, Ruth was entitled to call upon her nearest of kin to fulfil the various duties of a responsible kinsman. Since Boaz is kin to Naomi and her family, she sends Ruth to the place where the menfolk thresh the harvested grain and tells her what she must do to secure protection for them both.

Naomi tells Ruth to wait till Boaz falls asleep, then uncover his feet and remain there. Later in the night, Boaz awakes and asks Ruth who she is. After Boaz realises that Ruth, a widow, is kin to him (through Jewish marriage), and seeks his protection, he blesses her and promises to take care of her situation. Her reputation as a chaste and honourable woman has gone before her.

Ruth then asks Boaz to cover her with the corner of his garment. There was nothing improper going on, although it would be highly irregular for a widow to be found sleeping at the feet of a man to whom she was not married. Boaz does not hesitate to cover Ruth with his garment and to allow her to remain at his feet. First thing in the morning Boaz will speak to a closer relative, but if he does not want to redeem her, then Boaz will. That means marrying her.

By turning up at night to uncover the feet of Boaz, and laying down by his feet, Ruth's actions amounted to a marriage proposal under the well-known provision of the Hebrew law of the kinsman redeemer (Leviticus 25:25).

Why did Ruth uncover Boaz’ feet? So he would wake up during the night because his exposed feet would become cold as the temperature dropped. He would wake up gently and naturally, without alarm. A simple, practical way to ensure Boaz would not sleep till dawn.

Boaz probably slept upon a mat or skin; Ruth lay crosswise at his feet—a position in which Eastern servants frequently sleep in the same chamber or tent with their master; and if they want a covering, custom allows them that benefit from part of the covering on their master's bed. Resting, as the Orientals do at night, in the same clothes they wear during the day, there was no indelicacy in a stranger, or even a woman, putting the extremity of this cover over her.

Naomi ventured, on a bold expedient to bring speedy rest to her daughter-in-law. But we assume that, with unmistaking feminine intuition, she saw, on the one hand, that Boaz was already deeply attached to Ruth, and, on the other, that Ruth reciprocated his attachment with pure intensity. Most probably we should also assume that she detected in Boaz a peculiar diffidence that caused him to shrink from making decisive advances in the way of declaring his affection. He had, however, unconsciously revealed himself, and made it clear to Naomi that he wished to divulge in words the depth of his honorable feelings. But again and again, as we may suppose, his sensitiveness overcame his resolutions. Hence Naomi's scheme to bring him to the point of declaration. It would have been reprehensible in the extreme had she not been absolutely certain of his wishes, on the one hand, and of his perfect honor and un-contaminable purity on the other. And even with that qualification, the scheme would have been imprudent and improper, and utterly unfeminine, had it not been the case that, in virtue of an ancient and much-prized Hebrew law, Ruth was entitled to call upon her nearest of kin to fulfill the various duties of a responsible kinsman. Still, notwithstanding the existence of this law, we may rest assured that the sensitive gleaner would never have summoned up courage to ask Boaz to discharge to her the duties of kinship, unless she had been sure that the thrills that vibrated within her own heart were responsive to subtle touches, on his part, of spirit with spirit.

Thus, Ruth's actions amounted to a marriage proposal under the well-known provision of Hebrew law of the kinsman redeemer. See Lev 25:25 etc.

While there are theories that state, based on "feet" and "lie down" (which are often used as euphemism (for instance, 2 Samuel 11:4)), that the act resembled sexual intercourse, I don't think it to be what happened due to the character of both Ruth and Boaz.

So, from the standpoint of really uncovering the feet and laying down near them, another interpretation (apart from marriage request) is found in the comments from BPT09 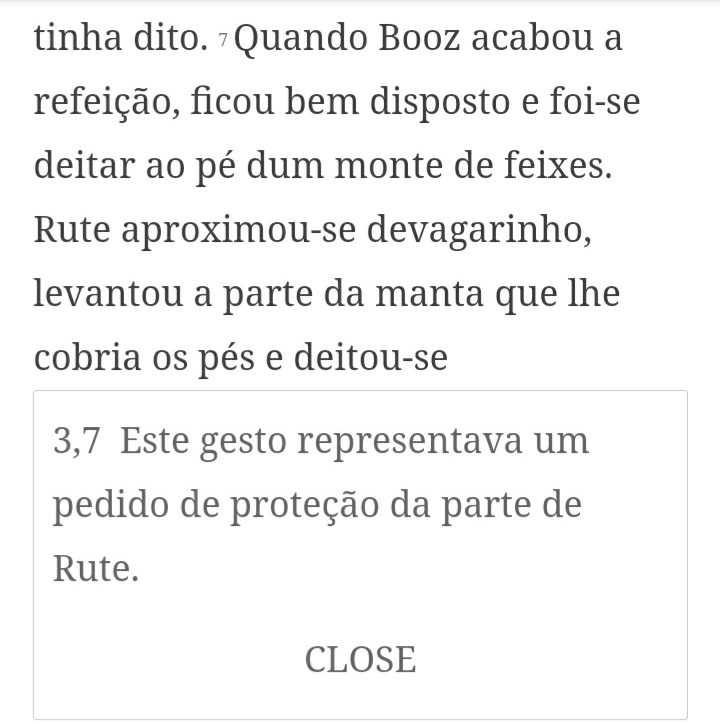 3.7 This gesture represented a request for protection on the part of Ruth.

So, it'd just mean protection (not necessarily marriage). Now the expression that in Hebrew is equivalent to a marriage request happens further down in verse 9 (NASB)

So he said, “Who are you?” And she answered, “I am Ruth your slave. Now spread your garment over your slave, for you are a redeemer.”

similarly to what we read in Ezekiel 16:8

“Then I passed by you and saw you, and behold, you were at the time for love; so I spread My garment over you and covered your nakedness. I also swore an oath to you and entered into a covenant with you so that you became Mine,” declares the Lord God.

Not the answer you're looking for? Browse other questions tagged cultural-analysis ruth love chronology or ask your own question.

20
Did Ruth uncover Boaz' feet, or something else?
15
What does "Do not arouse or awaken love until it so desires." mean?
9
What is the significance of touching Moses' feet with his son's foreskin in Exodus 4:25?
12
What is the intended image of "pierced my hands and feet" in Psalm 22:16?
1
What does 'love in the Spirit' mean in Colossians 1:8?
2
Could the symbolic gesture of shaking off dust in Matthew 10 and Acts 13 have been steeped in some Jewish culture?
1
What does Matthew mean by "those on His left" and "and those on His right" in Matthew 25?
3
What does "his love" mean in 1 John 4:12?
9
What does it mean to cast a shoe?