Psalm 96 (95) Why does the LXX translate אלילים as δαιμόνια?

(Brenton Septuagint Translation) For all the gods of the heathen are devils: but the Lord made the heavens.

(KJV) For all the gods of the nations are idols: but the LORD made the heavens.

(NET) For all the gods of the nations are worthless, but the LORD made the sky.

(JPS Tanankh 1917) For all the gods of the peoples are things of nought; But the LORD made the heavens.

Why does the LXX translate אלילים as δαιμόνια (demons) in this Psalm?

It's interesting because, in Leviticus 19:4, the LXX transltates הָ֣אֱלִילִ֔ים as εἰδώλοις (idols). Why the inconsistency?

I am aware that, in Hebrew, two different words can look identical when written without vowel points. Could that be the explanation?

Or is אליל a single word with multiple meanings, a word therefore impossible to completely describe with a single Greek (or Latin, or English word)?

Moreover, why does Jerome choose to follow the LXX (translating the word as dæmonia) when he so often discards the Greek when there is a conflict with the Hebrew? (As in his translation of Genesis 1:2.) Did Jerome believe that there was no conflict?

Jerome and his peers were, IMHO, were Platonists first and foremost and in the Greco-Roman interpretation of Judaism, Daemons were everywhere. But this is not without Hebrew precedent, as Paul said:

[1Co 10:20 NASB] (20) [No,] but [I say] that the things which the Gentiles sacrifice, they sacrifice to demons and not to God; and I do not want you to become sharers in demons.

And, Paul is actually citing Deuteronomy:

[Deu 32:17 NLT] (17) They offered sacrifices to demons [H7700], which are not God, to gods they had not known before, to new gods only recently arrived, to gods their ancestors had never feared.

From the Jewish Encyclopedia:

Demons in the Bible. The demons mentioned in the Bible are of two classes, the "se'irim" and the "shedim." The se'irim ("hairy beings"), to which the Israelites sacrificed in the open fields (Lev. xvii. 7; A. V. "devils"; R. V., incorrectly, "he-goats"), are satyr-like demons, described as dancing in the wilderness (Isa. xiii. 21, xxxiv. 14; compare Maimonides, "Moreh," iii. 46; Vergil's "Eclogues," v. 73, "saltantes satyri"), and are identical with the jinn of the Arabian woods and deserts (see Wellhausen, l.c., and Smith, l.c.). To the same class belongs Azazel, the goat-like demon of the wilderness (Lev. xvi. 10 et seq.), probably the chief of the se'irim, and Lilith (Isa. xxxiv. 14). Possibly "the roes and hinds of the field," by which Shulamit conjures the daughters of Jerusalem to bring her back to her lover (Cant. ii. 7, iii. 5), are faunlike spirits similar to the se'irim, though of a harmless nature. The (Job v. 23. A. V. "stones of the field"), with which the righteous are said to be in league—obviously identical with, if not a corruption of, the (Mishnah Kil. viii. 5), explained in Yer. Kil. 31c as "a fabulous mountain-man drawing nourishment from the ground" (see Jastrow, "Dict.," and Levy, "Neuhebr. Wörterb." s.v. )—seem to be field-demons of the same nature. The wilderness as the home of demons was regarded as the place whence such diseases as leprosy issued, and in cases of leprosy one of the birds set apart to be offered as an expiatory sacrifice was released that it might carry the disease back to the desert (Lev. xiv. 7, 52; compare a similar rite in Sayce, "Hibbert Lectures," 1887, p. 461, and "Zeit. für Assyr." 1902, p. 149).

The Israelites also offered sacrifices to the shedim (Deut. xxxii. 17; Ps. cvi. 37). The name (believed by Hoffmann, "Hiob," 1891, to occur in Job v. 21), for a long time erroneously connected with "the Almighty" (), denotes a storm-demon (from , Isa. xiii. 6; A. V. "destruction"; compare Psxci. 6, , "that stormeth about"; A. V. "that wasteth"). In Chaldean mythology the seven evil deities were known as "shedim," storm-demons, represented in ox-like form; and because these oxcolossi representing evil demons were, by a peculiar law of contrast, used also as protective genii of royal palaces and the like, the name "shed" assumed also the meaning of a propitious genius in Babylonian magic literature (see Delitzsch, "Assyrisches Handwörterb." pp. 60, 253, 261, 646; Jensen, "Assyr.-Babyl. Mythen und Epen," 1900, p. 453; Sayce, l.c. pp. 441, 450, 463; Lenormant, l.c. pp. 48-51). It was from Chaldea that the name "shedim" = evil demons came to the Israelites, and so the sacred writers in tentionally applied the word in a dyslogistic sense to the Canaanite deities 'in the two passages quoted. But they also spoke of "the destroyer" () Ex. xii. 23) as a demon whose malignant effect upon the houses of the Israelites was to be warded off by the blood of the paschal sacrifice sprinkled upon the lintel and the door-post (a corresponding pagan talisman is mentioned in Isa. lvii. 8). In II Sam. xxiv; 16 and II Chron. xxi. 15 the pestilence-dealing demon is called = "the destroying angel" (compare "the angel of the Lord" in II Kings xix. 35; Isa. xxxvii. 36), because, although they are demons, these "evil messengers" (Ps. lxxviii. 49; A. V. "evil angels") do only the bidding of God, their Master; they are the agents of His divine wrath.

The Nether World in the Clutches of a Demon.(From an Assyrian bronze tablet in the collection of M. de Clerq.) But there are many indications that popular Hebrew mythology ascribed to the demons a certain independence, a malevolent character of their own, because they are believed to come forth, not from the heavenly abode of Yhwh, but from the nether world (compare Isa. xxxviii. 11 with Job xiv. 13; Ps. xvi. 10, xlix. 16, cxxxix. 8). "The first-born of Death who devours the members of his [man's] body" and causes him to be brought "to the king of terrors" (Job xviii. 13, 14, Hebr.), is undoubtedly one of the terrible hawk-like demons, portrayed in the Babylonian Hades-picture (see illustrationabove, and Roscher, "Lexikon der Griechischen und Römischen Mythologie," s.v. "Nergal"), and the "messengers of death" (Prov. xvi. 14) are identical with the "servants of Nergal," the King of Hades and god of pestilence and fever in Chaldean mythology (see Jeremias, "Die Babylonisch-Assyrischen Vorstellungen vom Leben nach dem Tode," 1887, pp. 71 et seq.; Zimmern, l.c. pp. 412 et seq.; Jensen, l.c. pp. 478, 557).

Other Demons. 'Alukah (Prov. xxx. 15; A. V. "horseleech"), the bloodsucker or vampire, whose two daughters cry "Give! Give!" is none other than the flesh-devouring ghoul of the Arabs, called by them "'aluḳ" (Wellhausen, l.c. pp. 135-137). She has been rendered in Jewish mythology the demon of the nether world (= see 'Ab. Zarah 17a), and the names of her two daughters have in all probability, as familiar names of dreaded diseases, been dropped (compare Ewald, Delitzsch, and Wilderboer's commentaries, ad loc., and the description of the demon "Labartu" in "Zeit. für Assyr." 1902, pp. 148 et seq.). Deber ("pestilence"), originally the death-dealing sting of the midsummer sun-god Nergal (see Roscher, l.c. iii. 257), and Keṭeb ("smiter"), the deadly hot wind (Deut. xxxii. 24; Isa. xxviii. 2; A. V. "destruction," "destroying"), are demons, the one walking in darkness, the other storming along in midday (A. V. "that wasteth at noonday"), against which God's protection is invoked in the incantatory psalm "Shir shel Pega'im," ascribed to Moses by the Rabbis (Ps. xci. 5, 6; compare Midr. Teh. ad loc.; Tan., Naso, ed. Buber, 39; Num. R. xii.). Possibly the evil spirit that troubled Saul (I Sam. xvi. 14 et seq.) was originally a demon (compare Josephus, "Ant." vi. 8, § 2), turned into an evil spirit coming from Yhwh in the amended Masoretic text (see Smith, Commentary, ad loc.). None of these demons, however, has actually a place in the system of Biblical theology; it is the Lord who sends pestilence and death (Ex. ix. 3, xii. 29); Deber and Reshef ("the fiery bolt") are His heralds (Hab. iii. 5). The shedim are "not-gods" (Deut. xxxii. 17); there is no supernatural power beyond Yhwh (Deut. iv. 35; compare Sanh. 67b). It is possible, however, that, as at a later stage in the development of Judaism the idols were regarded as demons, so the Canaanite deities were, either in disparagement, or as powers seducing men to idolatry, called "shedim" by the sacred writers (Deut. xxxii. 17; Ps. cv. 37); all the more so as the latter ascribed a certain reality to the idols (Ex. xii. 12; Isa. xix. 1, xxiv. 21; see Baudissin, "Studien zur Semitischen Religionsgesch." 1876, i. 130).

As indicated in previous comments, the false gods, or idols/demons of the nations, are specifically called אלילים (ELiLiM), from the singular אֱלִיל. Psalm 96(95):5 formulaically recurs in 1 Ch 16:26:

With St. Jerome likewise translating it as:

Much exhortation is found in the Prophets about destroying idols and the cult of idols, all of which will thoroughly vanish away (see Isaiah 2:18, “… et idola/הָאֱלִילִים penitus conterentur.”).

Their use or worship takes on different kinds of manufactured materials, ultimately expressing manufactured conceptions of the fallen human intellect insofar as it labors under the operation of error, and accordingly falls into grievous idolatrous practice.

Such “idols/models/designs/simulacres of the nations” are as empty as the cult of Mammon itself, being made of “silver and gold” (כֶּסֶף וְזָהָב, a scriptural formulaic metonymy), nothing but literally “works of human hands” (מַעֲשֵׂה יְדֵי אָדָם).

Idols are thus literally “outrageous” and “offensive” constructions of men (פסלים or צלמים), intellectual (ideologies, theories, models) or material (metonymically “silver and gold”), directed to the worship of man, or of manufactured things and finally to the actual demons (who are spiritual substances) attached to such things and false worship. An abomination, which especially violates the first commandment.

Thanks for the question.

Perhaps some translators associate 'alilim' with Lilith (night spirit/demon). After being unable to find such a connection to 'alilum', the following explanation came up: 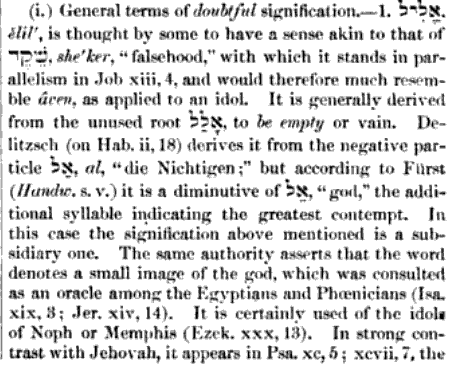 I don't know if the words are identical (I don't think so) but rather the meaning is identical. See at Corinthians:

[No], but that the things which the Gentiles sacrifice, they sacrifice to demons and not to God, and I do not desire that you should have fellowship with demons

It seems that the Septuagint translators did a connection of that uncertain word. The connection of course is not without reason. As you see in Corinthians the subject was idols.

*uncertain because it means idols but also used as "worthless"

KJV 17 Woe to the idol shepherd that leaveth the flock

NASB Woe to the worthless shepherd

First, you are right: in Hebrew two different words could look identical, if there are written without vowel points, but it's the same word as in Lev 19,4 and Ps 96,5.

The basic meaning of אליל is 'null' (אליל is singular, אלילים plural). In Ps 96,5 אלילים refers to the pagan gods, the gods of nations. This gods are 'nulls' its means they are no-god. The old testament terms the no-gods also 'deamons' oder 'idols'. Its a deprecatingly term for other God then JHWH. So Ps 96,5 is translated with the word 'deamons' and Lev 19,4 with 'idols'; in this context it's the same. They worship not JHWH, they worship nulls. This explains also the translation of Jerome.

From the Hebrew, St. Jerome translates: all the gods of the peoples are statues. But he knew that the Hebrew word אלילﬦ elilim does not properly signify demons nor statues. A demon is called שרפכל schedpesel, "statue", but the word elilim is seen to signify "little gods", as it is the diminutive from אר el, which signifies God, that the sense be, The gods of the gentiles are not gods, but "little gods", or useless and vain "bastard gods"; but the Lord is the true and powerful God who made the heavens.

Not the answer you're looking for? Browse other questions tagged greek hebrew psalms translation-philosophy septuagint or ask your own question.