What is hair like women's hair? Is it in relation to length, something akin to Paul's argument from 1 Corinthians 11:15?

Or to style, something akin to either Paul's or Simon Peter's statements in 1 Timothy 2:9 and 1 Peter 3:3, respectively, regarding braided hair?

Perhaps something to do with a reference to Song of Solomon?

Or something else entirely?

The hair like women's hair in Rev. 9:8 is a comparison, a simile. The word "like" tells us that the locust army would have the appearance of or look like they had women's hair.

The battle described in Rev. ch. 9 refers back to the prophesy of Joel 2:1-25. Much of Revelation comes straight out of the OT prophesies against the "holy people" and the "holy city" of Zion - Jerusalem.

When reading God's prophesies we have to be prepared for the similes, metaphors and symbolism which He used and defined in the OT scriptures. The parallels of the verses give us the clues for the symbols.

Blow ye the trumpet in Zion, and sound an alarm in my holy mountain: let all the inhabitants of the land tremble: for the day of the Lord cometh, for it is nigh at hand;" (KJV)

When we "decode" this prophesy we find the following:

Zion of the first part of the verse is restated in the second half as "my holy mountain" and was the name God used in prophesy for Jerusalem. Jerusalem was the mountain of God (Isa. 56:7; 66:20).

Therefore the land that trembled was the land where Jerusalem was located in Judah, and the inhabitants were those who lived in Judah / Jerusalem - the Jews. Many times the land was called the "earth", and only referred to the specific land of the nation under judgment. The "earth" = the "land" which also equaled the inhabitants or the people. It was used interchangeably in prophesy for all three.

The immediate contemporary meaning in Joel 2 foretold the first destruction of Jerusalem by the Chaldean army under Nebuchadnezzar which is commonly said to have happened approx. 589 - 586 BC.

The description of this army in Joel 2:4-9 as running upon the walls of the city, and to and fro and is compared to the locusts and the canker worm in vs. 25.

"And I will restore to you the years that the locust hath eaten, the cankerworm, and the caterpiller, and the palmerworm, my great army which I sent among you." (Joel 2:25, KJV)

So, the locusts which destroy everything they come against were used as a symbol of an army that completely destroyed Jerusalem and the temple.

The second use of that symbol in Revelation was again a symbol of complete destruction, and it was about the second destruction of Jerusalem and the temple in AD 70 under the Roman army led by Vespasian and his son Titus.

The Roman army had face guards that appeared as faces of men. The hair like women's hair were the animal pelts they wore as their standards and emblems of their legions - lions, bears, leopards, wolves, etc. 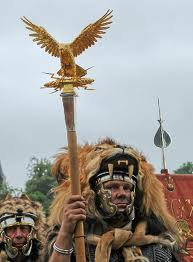 See my answer to the question here for other symbols in Rev. chap. 9 that described the Roman army of the first century AD.

The second, and fuller sense of Joel's prophesy of the locust army was the battle described in Rev. chap. 9 and it was foretelling the destruction of Jerusalem - Zion - in AD 70 at the hands of the Roman army.

See the posts at my blog ShreddingTheVeil, "The Signs of Revelation, Parts I - VIII, for the scriptural evidences of the prophesy of Revelation which has already been fulfilled, beginning here.

The hair symbolizes length….as in the length of words that come out of the mouth (such as being “long”–winded in speech). The words are not cut short but continue on in length just as a woman wears her hair long.

If this is the case, there must be a “woman” also to every person.

The “woman” or wife is the “weaker vessel”. The tongue is that “weaker vessel” that gives birth to words that comes from (conceived within) the “hidden man of the heart”.

Out of the overflow of the heart does the tongue beget words into the air. Words can be used for good or evil...depending on the breath (spirit) within. Words can be spoken in joy, gentleness, wrath, covetousness, etc. What breath or spirit is within is used to speak words.

The hidden man of the heart must rule over the tongue (the “weaker vessel”) as the tongue can easily speak rash words in wrath. We are to refrain our tongues from speaking evil and guile (deceit).

The tongue can be used to speak flattering, glittering words in order to deceive others…..hence the “plaiting of hair” and the wearing of gold and the putting on of apparel.

This is not literal but speaks of the use of our words that come out of the mouth. The tongue gives birth to words. These words can be glittery, flattering words that are used to deceive others.

1 Peter 3:3-4 KJV (3) Whose adorning let it not be that outward adorning of plaiting the hair, and of wearing of gold, or of putting on of apparel; (4) But let it be the hidden man of the heart, in that which is not corruptible, even the ornament of a meek and quiet spirit, which is in the sight of God of great price.

This is why Peter continued to say that those who want to love life and see good days must refrain his tongue (the “woman”….the “weaker vessel”…. to the “hidden man of the heart”) from speaking evil or using the tongue to speak “guile”….speaking flattering words to deceive others. Some who preach with guile in their mouths use “braided” words to deceive others .

The "wearing of apparel" speaks of the “cloak” to cover up the covetousness within one’s heart.

1 Thessalonians 2:3-5 KJV (3) For our exhortation was not of deceit, nor of uncleanness, nor in guile: (4) But as we were allowed of God to be put in trust with the gospel, even so we speak; not as pleasing men, but God, which trieth our hearts. (5) For neither at any time used we flattering words, as ye know, nor a cloke of covetousness; God is witness:

When one hears the Word of God spoken in truth and sincerity, some will become angry within their hearts….within the hidden man of the heart...as they will not believe in what they hear.

Wrath starts within the heart of man….it is conceived within… and then that hidden man desires to speak words of wrath outwardly. Sin lies at the door of the mouth wanting to proceed out of the mouth, but we must rule over our wrath.

Sin is “born” by the tongue (the “woman” so to speak) as the tongue is used to speak words of wrath that was conceived within the hidden man of the heart. Out of the overflow of the heart does man speak. Death and life are in the power of the tongue...which is the "weaker vessel".

James 1:13-16 KJV (13) Let no man say when he is tempted, I am tempted of God: for God cannot be tempted with evil, neither tempteth he any man: (14) But every man is tempted, when he is drawn away of his own lust, and enticed. (15) Then when lust hath conceived, it bringeth forth sin: and sin, when it is finished, bringeth forth death. (16) Do not err, my beloved brethren.

The evil things that proceed out of the mouth comes from the heart….the “abyss”….the pit. The evil hidden deep within the heart manifests itself outwardly by the use of the tongue that begets sin…evil words.

Matthew 15:17-20 KJV (17) Do not ye yet understand, that whatsoever entereth in at the mouth goeth into the belly, and is cast out into the draught? (18) But those things which proceed out of the mouth come forth from the heart; and they defile the man. (19) For out of the heart proceed evil thoughts, murders, adulteries, fornications, thefts, false witness, blasphemies: (20) These are the things which defile a man: but to eat with unwashen hands defileth not a man.

In Revelation 9, we find that the “bottomless pit”….which is the abyss of the heart….is opened from which arose “smoke” out of the pit. “Smoke” in this context speaks of wrath….great wrath…. that arises within the heart.

The “locusts” in the context of Revelation 9 are a multitude of evil words (sin is manifested) that come flying out of the mouths of those who do not rule over their tongues. Sin instead has dominion over them.

These evil words have power to sting those who do not keep the sacrifice of the Lord in their lives (the green things).

These green things are His people who will not return evil for their evil…nor return threatening for their threatening. We shall not be harmed by their evil words by keeping the sacrifice of the Lamb within our lives by dying to sin….not returning railing for their railing against us. Those who believe in God believe in His Word of Truth and keep the dying of the Lord....they are faithful unto the death...the death of our Lord who died for us.

Revelation 9:3-4 KJV (3) And there came out of the smoke locusts upon the earth: and unto them was given power, as the scorpions of the earth have power. (4) And it was commanded them that they should not hurt the grass of the earth, neither any green thing, neither any tree; but only those men which have not the seal of God in their foreheads.

Which brings us to Revelation 9:8 where it speaks of the wicked in words being long-winded in their wrathful tirades….they had hair as the hair of women.

The length of their evil words is long and there is no break in their evil. They do not pause but continue in length in evil words. The tongue will not cease from speaking evil which will bring themselves torment and those who do not keep the daily sacrifice of the Lamb within their lives by dying to sin....not returning evil for evil.

Revelation 9:8 KJV (8) And they had hair as the hair of women, and their teeth were as the teeth of lions.

Their words will be piercing as the “teeth of lions” as they are “set on fire”. The tongue is a fire….a world of evil…and it will torment those who will be set on fire with it.

Psalms 57:4 KJV (4) My soul is among lions: and I lie even among them that are set on fire, even the sons of men, whose teeth are spears and arrows, and their tongue a sharp sword.

Not the answer you're looking for? Browse other questions tagged revelation gender or ask your own question.