This question is asked to find out if the claims of Nehemiah Gordon in his book The Naming of Jesus in Hebrew Matthew is right.

About the contents of the book:

The Gospel of Matthew was originally written in Hebrew before being translated into Greek and other languages. The Hebrew version of Matthew survives in at least twenty-eight manuscripts copied by Jewish scribes in the Middle Ages. Among the most important manuscripts of Hebrew Matthew is the one preserved in the British Museum Library. A full-color reproduction of a section of this manuscript is now available for the first time as an 24" x 18" poster; a miniature reproduction is featured on the front cover of this booklet. The reproduction contains the story of the naming of Jesus as told in Hebrew Matthew 1:18-25 and includes the original form of Jesus Hebrew name: Yeshua. This booklet contains information about the poster reproduction of Hebrew Matthew including a Hebrew transcription, an English translation, and detailed explanations. Learn about the unique features of Hebrew Matthew, about the traditions that guided the Jewish scribes who transmitted this ancient text, and how the name Yeshua became Jesus.

This is not mainly to understand the name as in Matthew 1:18-25. But to find out if any of the apostles wrote in the greek the name Iēsoun Ἰησοῦν instead of Yeshua in Hebrew.

The background is that there is a teaching going on that the name to be called on to be saved is Yeshua and not Iēsoun Ἰησοῦν or Jesus.

It will also be good to know something about how we got the bible in English. The languages in which the books were originally written and whether they are available now. And the languages through which the translations passed for us to get the first English Bible.

The only evidence whether Matthew wrote in Hebrew first is very controversial, it is the fragment of the second century author named Papias of Hierapolis. There are no extant copies of the work in question, and that fragment is only preserved in the writings of Eusebius from the fourth century.

Here is what Eusebius states (in the English Translation):

16 But concerning Matthew he writes as follows: “So then Matthew wrote the oracles in the Hebrew language, and every one interpreted them as he was able.” And the same writer uses testimonies from the first Epistle of John and from that of Peter likewise. And he relates another story of a woman, who was accused of many sins before the Lord, which is contained in the Gospel according to the Hebrews. These things we have thought it necessary to observe in addition to what has been already stated.

The word Logia that Arthur Cushman McGiffert translated as "oracles" is where all of the controversy has raged. Those who hold to some form of historical criticism have suggested that this is should be the word sayings, presupposing that Papias was referring to an early document like the supposed Q document, written by Matthew in Hebrew. Those liberal scholars then suppose that Matthew's gospel is only a free translation of that original group of sayings. Numerous books and articles have been written by writers who take this tiny fragment and they then run with it to flights of fancy. It is a question of whether on believes the gospels to be historically reliable. Those who think them reliable (like myself) reject the fragment of Papias as unreliable. Those who reject the historical reliability of the gospels tend to view Papias as referring to "sayings" so they can reject Matthew in favor of a "Q" document.

Blomberg stated the following about the issue in Papias:

Several key words in this sentence, however, might be rendered quite differently. Dialektos (“language”) has been taken to mean style so that Papias’s remarks could be applied to canonical Greek Matthew without postulating a lost Aramaic original. But this is an extremely rare meaning for the term and not a likely interpretation. Others translate hermēneuō (“translate”) as “interpret,” a common meaning but not as likely in a context that seems to be contrasting Hebrew and Greek texts. Most significant is the debate over the meaning of logia, which does not naturally mean Gospel but sayings. Perhaps Papias is claiming that Matthew wrote down in Aramaic or Hebrew something less than a full-fledged Gospel but a collection of Jesus’ sayings (conceivably something like what modern scholars have labeled Q).

In the end one's presuppositions greatly affects how one views this controversy, as it applies to the historic reliability directly and the Synoptic Problem indirectly.

Claims by Nehemiah Gordon can be debunked with some relatively basic research. Wikipedia notes of the Gospel of Matthew:

The oldest relatively complete manuscripts of the Bible are the Codex Vaticanus and the Codex Sinaiticus, which date from the 4th century. Besides these, there exist manuscript fragments ranging from a few verses to whole chapters. P 104 and Magdalen papyrus are notable fragments of Matthew.

These fragments are notable because they are the oldest extant manuscript fragments for the Gospel of Matthew. 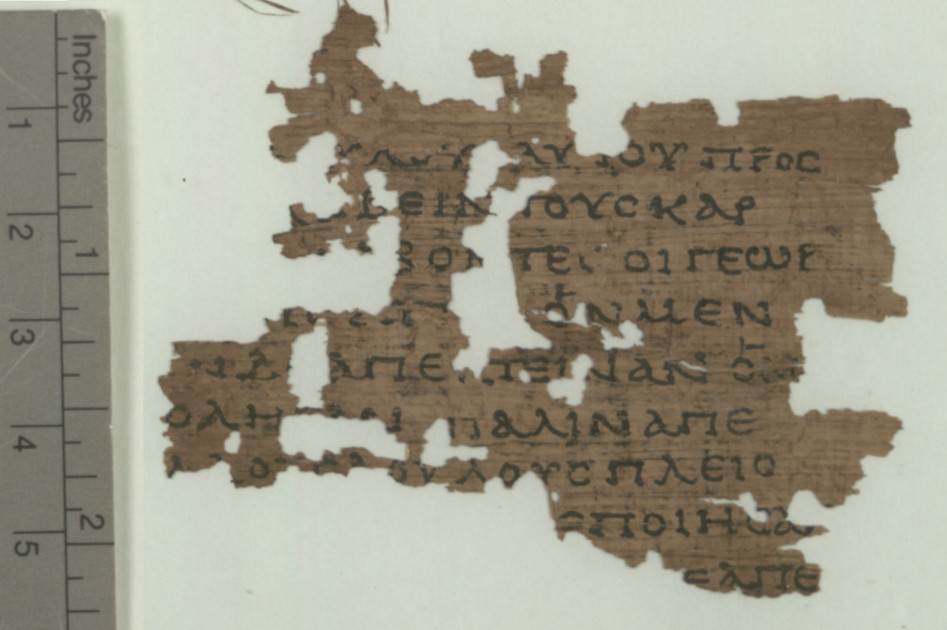 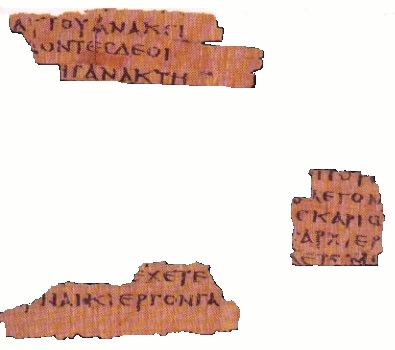 In addition to the images above, you can study Codex Siniaticus in the British Librarary's digital collection and Codex Vaticanus in the digital library hosted by the Center for the Study of New Testament Manuscripts.

At first glance, it appears that Gordon may be basing this idea off of the Hypothesis of George E. Howard, who postulated that tehse 28 texts were copies of origionals. however, this was largely rejected by the majority scholars who believe them to be copies of Hebrew translations.

The basis for rejecting this hypothesis can be seen by studying these early manuscripts, and you will notice that all of these texts are in greek. Furthermore, in The Gospel of Matthew: A Commentary on the Greek Text., John Nolland states that The author of Matthew was most probably writing for a community of Greek-speaking Jewish Christians located in Syria (and this generally agrees with most mainstream scholarship). Several justifications for this are provided such as the frequent mention of Antioch and the fact that even the Old Testament copies used by rabbis during that time were typically a Greek translation of the Hebrew texts called the Septuagint.

Furthermore Were the audience of Matthew not native Greek speakers, they most likely would have spoken Aramaic and if we were able to rule out Greek primacy, Aramiac would be the more likely choice for the language the Gospels were written in, not Hebrew.

Thus, for claims by Gordon to be accurate, this would have to be based on as yet undiscovered archaeological evidence contradictory to most scholarship. For each new manuscript date-able to the first and second century which is not in Hebrew, the likelihood of Hebrew or Aramaic primacy is diminished, as we would expect to see at least one or more manuscripts if Howard's/Gordan's hypothesis is correct.

The earliest translations of the Bible, such as the Tyndale Bible were directly from Greek -> English (for the book of Matthew).

In answer to your question, the name of Jesus was most likely first written in greek in Matthew 1:1 which reads:

Audio of the pronunciation of Ἰησοῦ is available here

This question appears to be a question of primacy, as in determining in which language the autographs of the scriptures were composed. On this I have nothing to add.

However, the question seems to be also interested in how the word "Jesus" appears at the earliest time and that would be much earlier than Matthew. The name appears many, many times in the Greek "LXX". Joshua the son of Nun is one example and in each case it is written just as it is in the NT, in Greek.

The takeaway is that the writers of the NT were not sticklers for sticking as close to the Hebrew pronunciation as possible. They followed their Bible which was a Greek text.

In the absence of any extant scripture to indicate that the apostles used YOSHUA or YEHOSHUA because it is the only way to get saved is without a mandate from the scriptures.

The critical issue in this question seems to be: "the name to be called on to be saved is Yeshua and not Iēsoun Ἰησοῦν or Jesus".

There's really no reason to think that the literal name itself is important.

When the police call and tell you to open the door in the name of the law, the actual name itself isn't important. One can say "the name of the law" or "nombre de la ley", or "nom de la loi" and it doesn't really matter which language is used, just so long as you understand what it means.

One can be saved by calling on Jeshua, or Jesus Christ, or 耶稣基督, or Gesù Cristo. The literal name itself doesn't matter. It is the person that the name represents that matters, not how the word is pronounced.

If that weren't the case, it would mean that deaf people could never be saved.

Not the answer you're looking for? Browse other questions tagged hebrew textual-criticism new-testament source-criticism bible-versions or ask your own question.

5
Do the Dead Sea Scrolls argue against Aramaic primacy?

12
When was the book of Joel written?
10
Was Barabbas' given name Jesus?
10
Written language during the time of Moses?
10
Might "son of Barachiah" be a scribal addition in Matthew 23:35?
2
What is Isaiah 24-27, and when was it written?
0
Does Isaiah 7:14 rule out the possibility of sex during the miraculous pregnancy?
17
Why the Inconsistency of the name Mary in the NT?
2
In Hebrews 1:3 is "by himself" original?
1
Does DSS version of Psalm 119:65 reveal Masoretes abbreviated original text?