[Psalm 90:2 Brenton Septuagint (LXX 89:2)] (2) Before the mountains existed, and before the earth and the world were formed, even from age to age, Thou art.

Jerome in Epistle to Sunnias and Fretela: “You are God.” And you say that “God” isn’t in the Greek [manuscript]. It is clear that [God] is in them, for the Hebrew [manuscript] even has [it], and all other translators and the LXX similarly have translated [it]: ἀπὸ τοῦ αἰῶνος ἕως τοῦ αἰῶνος σὺ εἶ, ὁ θεός.6

Here is the aforementioned passage of Jerome in entirety:7 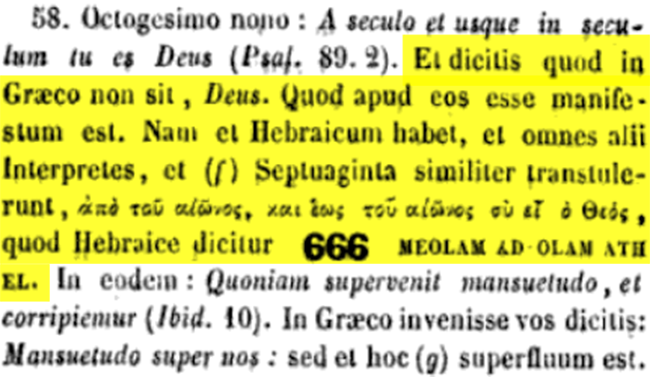 And you say that “God” isn’t in the Greek [manuscript]. It is clear that [God] is in them, for the Hebrew [manuscript] even has [it], and all other translators and the LXX similarly have translated [it]: ἀπὸ τοῦ αἰῶνος ἕως τοῦ αἰῶνος σὺ εἶ, ὁ θεός, which in Hebrew, it is said, מֵעוֹלָם עַד־עוֹלָם אַתָּה אֵל.

The Crux of the Issue

However, on the LXX’s translation, Franz Delitzsch commented,11

The LXX misses the sense, because it drags אל from v. 2 and reads אֵל־תָּשֵׁב (“you will not turn”).

John 8:58 could allude to a proto-LXX version of Psa. 90:2 wherein the Greek text translates the Hebrew אַתָּה אֵל (atta el)—“You are God.” As such, John 8:58 would mean, “I am God,” and the ellipsis ὁ θεός would need to be supplied in conjunction with ἐγὼ εἰμί. However, with all the textual issues, there is much uncertainty. Reading John 8:58 as is, and observing the reaction of the Jews to Jesus’ statement, the following translation seems appropriate:

The distinction is between Abraham, who was born and came into existence, and Jesus, who pre-existed as God. Whether we can supply ὁ θεός by ellipsis to ἐγὼ εἰμί, it does not alter the meaning (or import) of the Greek text.

The Prayer of Joseph: This prayer of repentance is only known through three fragments embedded in the writings of Origin. J. Z. Smith described the text as “a tantalizing fragment that has left no discernible impact on subsequent literature” (OTP 2:711).

Although the prayer originally ran some 1100 lines, only nine are now extant. Since the longest fragment appears in Origin’s Commentary on John, the prayer dates before A.D. 231. Origin introduced the text as “an apocrypha presently in use among the Hebrews.” J. Z. Smith thought the parallels with Hebrew and Aramaic prayers suggest a date in the first century (OTP 2:700). After observing the uncertainty associated with this text, Stephen Robinson suggests the prayer was written in the first century in either in Aramaic or Greek by a Jewish author (ABD 3:976). In his Lexham Bible Dictionary article, John Barry suggests the possibility the text may have “gnostic undertones” since Jacob is described as elevated figure with special abilities and knowledge.

Of interest to New Testament studies is the description of Jacob as “firstborn of every living being” in line three of the first fragment:

“I, Jacob, who is speaking to you, am also Israel, an angel of God and a ruling spirit. Abraham and Isaac were created before any work. But, I, Jacob, who men call Jacob but whose name is Israel am he who God called Israel which means, a man seeing God, because I am the firstborn of every living thing to whom God gives life.

This is remarkably similar to Colossians 1:15, although the Prayer of Joseph uses πρωτογενός rather than πρωτότοκος. But as Smith points out, both usages have their origin in Exodus 4:22, “Israel is my firstborn” (πρωτότοκός μου Ισραηλ, cf., 4 Ezra 6:58; Sir 36:17; PssSol 18:4). In addition, this fragmentary text also stats Abraham and Isaac were created before anything else. In John 8:58, Jesus claims “before Abraham was, I am.” In both Colossians and John, the issue is the pre-existence of Jesus, the Prayer of Joseph may be evidence of some interest among some first century Jews in the pre-existence of patriarchs like Abraham and Jacob.

One additional intriguing element of the first fragment is the re-interpretation of the struggle between Jacob and an angel in Genesis 32:22-32. In that canonical story, the identity of the man who wrestles with Jacob is not at all clear; he is never called an angel, but he seems more than human. When he blesses Jacob, the man says “you have striven with God.” Although this may imply the man was an angel (on an incarnation of God), that is not clear in the text. The Prayer of Joseph identifies the angel as Uriel:

And when I was coming up from Syrian Mesopotamia, Uriel, the angel of God, came forth and said that ‘I [Jacob-Israel] had descended to earth and I had tabernacled among men and that I had been called by the name of Jacob.’ He envied me and fought with me and wrestled with me saying that his name and the name that is before every angel was to be above mine. 6I told him his name and what rank he held among the sons of God. ‘Are you not Uriel, the eighth after me? and I, Israel, the archangel of the power of the Lord and the chief captain among the sons of God? Am I not Israel, the first minister before the face of God?’ And I called upon my God by the inextinguishable name.”

This angel is one of the archangels, serving as a “chief captain among the sons of God,” but so too is Israel, the “first minister before the face of God.” Uriel appears in Uriel are those found in The Astronomical Book (1 Enoch 72–82) and guides Enoch in several other heavenly journeys (1 Enoch 19:1; 21:5, 9; 27:2; 33:3-4). 1 Enoch 20:2 identifies him as one of the angels ruling over Tartarus. Since Israel overcomes Uriel, Barry suggests this is an allegory for the elevation of Israel (the nation) over all people.

Well to be honest I do know that John 8:58 refers to Exodus 3:14 but never heard of it referring to Psalm 90:2. The literal reading of John 8:58 is, "Before Abraham sprang into existence, I am." Or before Abraham came into being, I am."

Now, regarding Psalm 90:2,"Before the mountains were born, Or Thou didst give birth to the earth and the world, Even from evberlasting to everlasting, Thou are God." Here is what's interesting about this?

No! John 1:2, beginning. The definite article has been supplied. The actual Greek is en arche-that is, "in beginning." The "Word" was there before the creation of space-mass-time of the universe. This means that John's beginning even antecedes the Genesis "beginning," extending without an initial beginning into eternity past, even before time was created.

The answer is "NO"

Before the mountains were born Or You gave birth to the earth and the world, Even from everlasting to everlasting, You are God.

God has an eternal existance : The Bible teaches (Psalm 90:2) that God exists “from everlasting to everlasting.” In other words, God had no beginning and will have no end, it is like counting numbers, positive and negative, it goes endlessly either way.

26 Behold, God is exalted, and we do not know Him; The number of His years is unsearchable.

1/ Accuracy and Bias in translation.

Jason David BeDuhn of Northern Arizona University in his book "TRUTH IN TRANSLATION Accuracy and Bias of the New Testament" compares nine major English translations and states that the LB has a correct rendering of John 8:58. This verse does not make Jesus eternal, it simply states that Jesus existed prior to Abraham.Followed by the NW.

LB "I was in existence before Abraham was ever born."

NW before Abraham came into existence,I have been.

"What is going on here? You may think that there is a particularly difficult or convoluted Greek clause underlying this mess in English. But that is not the case. The Greek reads "prin Abraham genesthai ego eimi". What is Jesus says here is fine idiomatic Greek. It can be rendered straightforwardly into English by doing what translators always do with Greek, namely, rearrange the word into normal English order,and adjust things like verbal tense complimentary into proper expression".

The expression “I AM” is there used as a title or a name, and in the Hebrew this expression is the one word Ehyéh (אהיה). God was there speaking to Moses and sending him to the children of Israel. Well, then, in John 8:58, was Jesus claiming to be Jehovah God? Not according to many modern Bible translators, as the following quotations will prove:

58 Jesus said to them, “I tell you, I existed before Abraham was born!”

Google translation of Portugues into English

8 Jesus replied: “It really is as I say to you: even before Abraham was born, I already am!

Jesus spoke to the Jews in Hebrew, John wrote his gospel in Greek. How do Jewish translators translate Greek into Hebrew today? Dr. Franz Delitzsch: “Before Abraham was, I have been.”* Isaac Salkinson and David Ginsburg: “I have been when there had as yet been no Abraham.”* In both of these Hebrew translations the translators use for the expression “I have been” two Hebrew words, both a pronoun and a verb, namely, aní hayíthi; they do not use the one Hebrew word: Ehyéh. So they do not make out that in John 8:58 Jesus was trying to imitate God and give us the impression that he himself was God, the I AM.

The above expression also appears in John 8:24 and 8:28 and is translated "I am he", the question that arizes then is:

They evidently want to give us the idea that Jesus was not simply referring to his existence but also giving himself a title that belongs to God, in imitation of Exodus 3:14.

28 So Jesus said, “When you have lifted up[a] the Son of Man, then you will know that I am he and that I do nothing on my own but speak just what the Father has taught me.

Not the answer you're looking for? Browse other questions tagged john psalms nt-use-of-hebrew-bible inner-biblical-allusion or ask your own question.