Origin of Pleonastic Phrasology in the Bible

I noticed a phraseology in the King James Version of the bible that is strange to a modern English speaker. It involves two forms of the same word in close proximity in a sentence. Before posting this question I found quite a few examples using a regex search*. I would like to know the following:

In the contemporary literature this is referred to with several terms: cognate object (construction); internal object; cognate accusative; internal accusative. It is a common construction across the Semitic language family, as it is attested in many West Semitic languages (like Hebrew, Aramaic and Arabic) but also in East Semitic; for example, in the Akkadian Code of Hammurabi we have (§5): šumma dayānum dīnam idīn "if a judge 'judges' a judgment" (i.e., pronounces a judgment).

What seems to be new (or at least more fully developed) in various West Semitic languages, however, is the use of this expression with adjectives specifying the cognate noun. Thus, in Gen. 1:20 we have יִשְׁרְצוּ הַמַּיִם שֶׁרֶץ נֶפֶשׁ חַיָּה yišrəṣū hammayīm šereṣ nepeš ḥayyāh "let the waters bring forth living creatures" (where to bring forth and creature are from the same root in Hebrew). New here is that the cognate noun (creatures) is further specialized by the adjective living (lit. "of a living breath/soul").

This kind of construction can then be used for adverbial expressions. Thus, where we may ask "have you dreamt well?", Hebrew etc. would use "have you dreamt a good dream?". In this respect it is noteworthy that the Semitic languages that have an adverbial ending (like English -ly: Akkadian -iš; Syriac -ā'īt) do not use cognate object constructions this way, but that it is found in several languages that do not have productive adverbial endings (like Hebrew and Jewish Palestinian Aramaic).

When the noun in a cognate object construction is not specified further, the construction may simply be used to shift the focus from the event to the object or to lend the text a certain literary style.

Because the construction is so old, its origins are unfortunately unclear. It is however perfectly imaginable that it was first used in cases where no variation between verb and noun was possible (when there is no close enough synonym), or that it was used for emphasis (especially because such constructions lead to alliteration, like in English do a deed).

As for Greek, it is possible that these constructions were calqued into Greek with the Septuagint and thus ended up in the New Testament, but it is also possible that they developed independently in Indo-European or were borrowed at an earlier stage of contact—I wouldn't know about this.

Since you have some background in programming: instead of using a regex, you could also use a treebank query. That kind of query can search for specific syntactic constructions using a database of the text where everything has been tagged. For the Hebrew Bible, you can use SHEBANQ, but unfortunately you have to create an account to run a query (it is free, though). To find cognate object constructions you could use something like:

This searches for all clauses with a word with sp (part of speech) verb followed by an object phrase containing a word with the same base lexeme as the verb.

Bullinger designates such a figure of speech as “polyptoton.”1 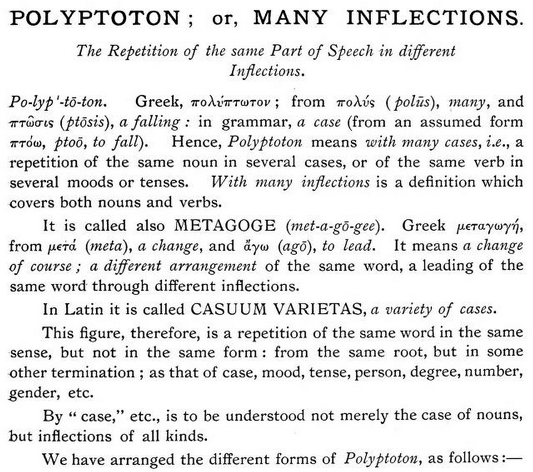 He categorizes the variety of polyptoton that occur in the Bible. 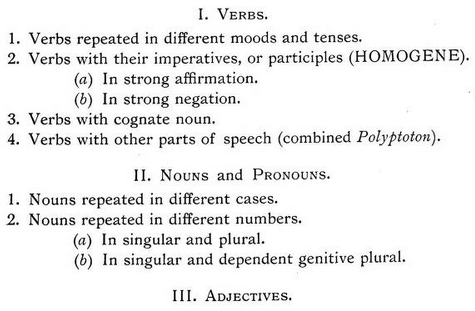 Examples like the ones you quoted are discussed in section “3. Verbs with cognate noun.”

The origin is obviously Hebrew, with respect to the Bible, since the English translators were simply translating into English the polyptotons that were already present in the Hebrew text. However, polyptoton didn’t only occur in the Bible. Polyptoton was also used by authors of other cultures. As Bullinger suggests, it may have been used by the Hebrew authors for emphasis.

The same figure of speech is designated by Julius Rufinianus as Greek Παρηγμένον or Latin derivatio.

The quotes cited by Rufinianus include:

Not the answer you're looking for? Browse other questions tagged greek hebrew kjv or ask your own question.

57
In Psalm 22:21 is the Bible speaking of "unicorns"?
21
Is there a modern English translation of the Bible that uses the second-person plural pronoun?
8
What were the major objections that Augustine had with Jerome's translation of the Hebrew Bible?
4
How were the passage divisions in the King James Bible determined?
1
What is the origin of the paragraph markings in the King James Version?
2
What is Proverbs 8:23 asserting about the origin of wisdom?
5
What are the various Bible Versions up till 1611?
4
Why is the word "honeycomb", in Luke 24:42, missing from most Bible translations?