In Isaiah 45:7, it is written that God forms light, creates darkness, makes peace, and creates evil.

7 I form the light, and create darkness: I make peace, and create evil: I the LORD do all these things. KJV, ©1769

What is the full meaning of this scripture?

The translation of Isa. 45:7 from the Hebrew reads in the Interlinear as:

"I form the light, and create darkness, I make peace, and create calamity - I Yahweh do all [these] things."

The word that is translated in the KJV and YLT, and several English versions as "evil" is Strong's Heb 7451 "ra'". The English definition is adversity; bad, evil. The grammatical use as an adjective is "evil", but as a noun which is the part used in the Isa. 45:7 it includes "distress, misery, adversity, calamity". Source: BDB at Biblehub.

The AMP has "causing peace and creating disaster". The CEB has "make prosperity and create doom". The CJB has it as "I make well-being; I create woe". These are better translations of the context and meaning of Isa. 45:7.

The context of the Isa. ch. 45 (continuing from Isa. 44:28) is of the chosen king Cyrus, approx. 150 years before Cyrus came to throne of Persia. Isaiah prophesied during the reigns of Uzziah, Jotham, Ahaz, and Hezekiah during the latter part of the eighth century BC from about 740 to 701 BC. (1)

Throughout this chapter God was making Himself known to Cyrus before Cyrus was even born. As Daniel prospered in the captivity under Darius and Cyrus (Dan. 6:28), it is most likely that Daniel related Isaiah's prophesy to Cyrus. Josephus believed this was so in his "Antiquities of the Jews" XI.1.2. (2)

So, Isa. 45:7 means that YHWH is the only God, and that He alone is the author of light and darkness, of peace and of adversity. He raises up kings and nations, and he throws them down (Psa. 52:5) .

"But the Lord is the true God; he is the living God and the everlasting King. At his wrath the earth quakes, and the nations cannot endure his indignation." (Jer. 10:10, RSV)

"13 Son of man, when the land sinneth against me by trespassing grievously, then will I stretch out mine hand upon it, and will break the staff of the bread thereof, and will send famine upon it, and will cut off man and beast from it:

14 Though these three men, Noah, Daniel, and Job, were in it, they should deliver but their own souls by their righteousness, saith the Lord God.

15 If I cause noisome beasts to pass through the land, and they spoil it, so that it be desolate, that no man may pass through because of the beasts:

16 Though these three men were in it, as I live, saith the Lord God, they shall deliver neither sons nor daughters; they only shall be delivered, but the land shall be desolate." (Ezek. 14:13-16, KJV)

The evil, or adversity that God creates are the judgments against the nations, and against people who sin; who turn to pagan idols, and turn away from Him.

1) "Cyrus the Great in Biblical Prophesy", by Wayne Jackson at ChristianCourier.com

2) Antiquities of the Jews, Josephus here

The prophesy of Isaiah was written about two hundred years before the fall of Babylon to the Persians, history has proven that God has the power to do as he pleases.By means of his prophet Isaiah , God make the following prophesy for the sake of his servant Jacob-Israel.

7 "The One forming light and creating darkness, Causing well-being and creating calamity; I am the Lord who does all these."

God the creator that makes light and creates darkness, has everything under his control-he causes well-being for Israel and creating calamity for Babylon.

13 "I have aroused Cyrus in righteousness, and I will make all his paths straight; he shall build my city and set my exiles free, not for price or reward, says the Lord of hosts. 14 Thus says the Lord: The wealth of Egypt and the merchandise of Ethiopia, and the Sabeans, tall of stature, shall come over to you and be yours, they shall follow you they shall come over in chains and bow down to you. They will make supplication to you, saying, “God is with you alone, and there is no other; there is no god besides him.”

The meaning of Bringing Evil "I form the light, and create darkness: I make peace, and create evil: I the Lord do all these things..( KJV 47:7)

Other examples of Evil or Calamities created by God,are the "flood of Noah's day" and the "ten plagues on Egypt" , such evils or calamities should not be considered as wrong doings, but rather the rightful application of justice on the wrong doers. 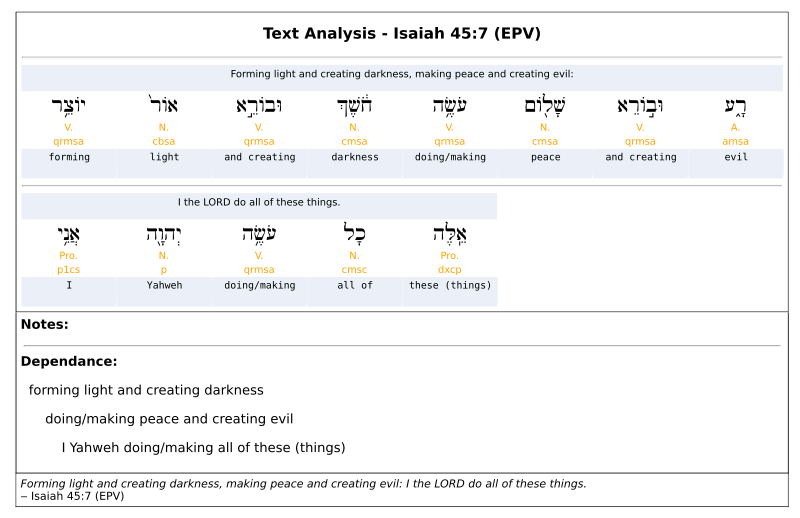 Light and peace are gifts of God, darkness and evil are what prevail when He withholds them.

1Arise, shine; for thy light is come, and the glory of the LORD is risen upon thee. 2For, behold, the darkness shall cover the earth, and gross darkness the people: but the LORD shall arise upon thee, and his glory shall be seen upon thee. 3And the Gentiles shall come to thy light, and kings to the brightness of thy rising.
-- Isaiah 60:1-3 (KJV)

17Thus saith the LORD, thy Redeemer, the Holy One of Israel; I am the Lord thy God which teacheth thee to profit, which leadeth thee by the way that thou shouldest go. 18O that thou hadst hearkened to my commandments! then had thy peace been as a river, and thy righteousness as the waves of the sea: 19Thy seed also had been as the sand, and the offspring of thy bowels like the gravel thereof; his name should not have been cut off nor destroyed from before me.
...
22There is no peace, saith the LORD, unto the wicked.
-- Isaiah 48:17-19,22 (KJV)

17For the iniquity of his covetousness was I wroth, and smote him: I hid me, and was wroth, and he went on frowardly in the way of his heart.
18I have seen his ways, and will heal him: I will lead him also, and restore comforts unto him and to his mourners.
19I create the fruit of the lips; Peace, peace to him that is far off, and to him that is near, saith the LORD; and I will heal him. 20But the wicked are like the troubled sea, when it cannot rest, whose waters cast up mire and dirt.
21There is no peace, saith my God, to the wicked.
-- Isaiah 57:15-21 (KJV)

Conclusion
Whatever one might imagine "evil" to be, it is born in the absence of light and peace. The LORD creates darkness and evil by leaving the wicked to feast upon the fruit of their own doings:

9The show of their countenance doth witness against them; and they declare their sin as Sodom, they hide it not. Woe unto their soul ! for they have rewarded evil unto themselves.
10Say ye to the righteous, that it shall be well with him: for they shall eat the fruit of their doings.
11Woe unto the wicked ! it shall be ill with him: for the reward of his hands shall be given him.
-- Isaiah 3:9-11 (KJV)