By Psalm 22:16, I mean "Dogs surround me, a pack of villains encircles me; they pierce my hands and my feet."

(v17 in the jewish verse numbering) "For dogs have encompassed me; a company of evil-doers have inclosed me; like a lion, they are at my hands and my feet."

Hebrew from the masoretic tradition

https://mechon-mamre.org/p/pt/pt2622.htm (has hebrew and english though they've put english punctuation marks into the hebrew)

https://mechon-mamre.org/c/ct/c2622.htm (has the hebrew without english punctuation marks thrown into the hebrew, and with trope/cantillation marks)

(i'm not concerned about kaari/karu. lion or pierced/dug..or what is written in the nahal hever fragment, i'm just looking at where the Hebrew of psalms 22:16 is in 4Q88)

Is Psalms 22:16 missing from Qumran Dead Sea Scroll 4Q88? It seems to me it isn't but then can anybody circle or graphically point at the Hebrew of it on the fragment?

(like tovia singer graphically points to the hebrew of the verse on the nahal hever fragment as shown in an image later).

"Unfortunately, the Psalms Scroll found at Qumran did not include 22:16[17] because the manuscript was damaged at the very place where it would have appeared."

And the author of that link mentions that (while it's not in fragments from qumran, it's in the fragments from Nahal Hever/Chever (Hebrew: נחל חבר), and i've seen a picture of exactly where, so i'm not asking about that(nahal hever), i'm asking purely regarding the fragments of qumran scrolls)

(added note- I just noticed, that while that link then mentions about nahal hever, later in the article, it goes on to say that there is a scrap from the DSS 4Q88 f1-2 that has words from the verse. "In fact, another scrap from the Dead Sea Scrolls, 4Q88 f1-2, 2:24–25, gives evidence that כרה was originally known by the scribes at Qumran. While the fragment is small and damaged, it has been transcribed by Ulrich3 as containing this line, ורגלי ידי כרו” ,they pierced (כרה (my hands and my feet.” While the כ and ר of כרו are marked as difficult to read (see the transcription above in the boxed graphic), it is clear that no letter is interposed between them....")

Note- i'm not asking about the whole pierced/dug, vs like a lion thing. Just interested in what's the hebrew that it has for that verse on the fragments, pointed to so I see it there.

If I look at the site dssenglish

http://dssenglishbible.com/scroll4Q88.htm (Note, 4Q88 is aka 4Q88 Psalmsf, and that link has an option to flick through the translated scroll/fragments, by clicking "previous scroll" or next scroll, so e.g. seeing 4Q89 aka 4Q89 Psalms g, or 4Q87 aka 4Q87 Psalms e).

That link also at the side, describes for when it shows text in Black, Blue, Green, Struck through, or as Red. If a word is present but unreadable then it's in blue. And if a word is not present then it's in italics. And spelling differences that don't affect the meaning, are in green.

And It also shows the verse translated from the nahal chever fragments.

Even putting that link aside, there's no question that the verse is in the nahal chever fragments.

as e.g. there's this image from rabbi tovia singer 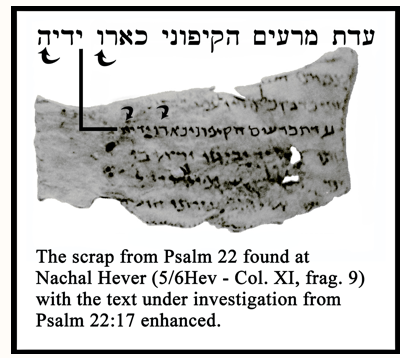 That is a useful image from tovia singer re Nachal Hever, because it points to the unclear hebrew on the fragment and shows it in clear hebrew letters. So I can see on the Nahal Hever fragment where the words/letters are.

And so I can't tell properly if the verse is in the Qumran fragments too, without an image like that. So i'd like it pointed out to me in that kind of image, where the verse is in 4Q88

The dssenglish site suggests that it is in the qumran fragments in 4Q88 (From what I understand, 4Q means fourth qumran cave)

But that pdf I linked to says it is not in qumran scrolls. (note- the pdf was misleading, as the pdf later stated - correctly - that parts of it is). Still, i'd like to see the hebrew of the verse pointed to on the fragments.

This link https://www.deadseascrolls.org.il/explore-the-archive/manuscript/4Q88-1 shows 4Q88 fragments, but I can't tell where if anywhere Psalms 22:16 would be.

This link http://bhebrew.biblicalhumanities.org/viewtopic.php?t=777 mentions a book by ulrich on the qumran fragments 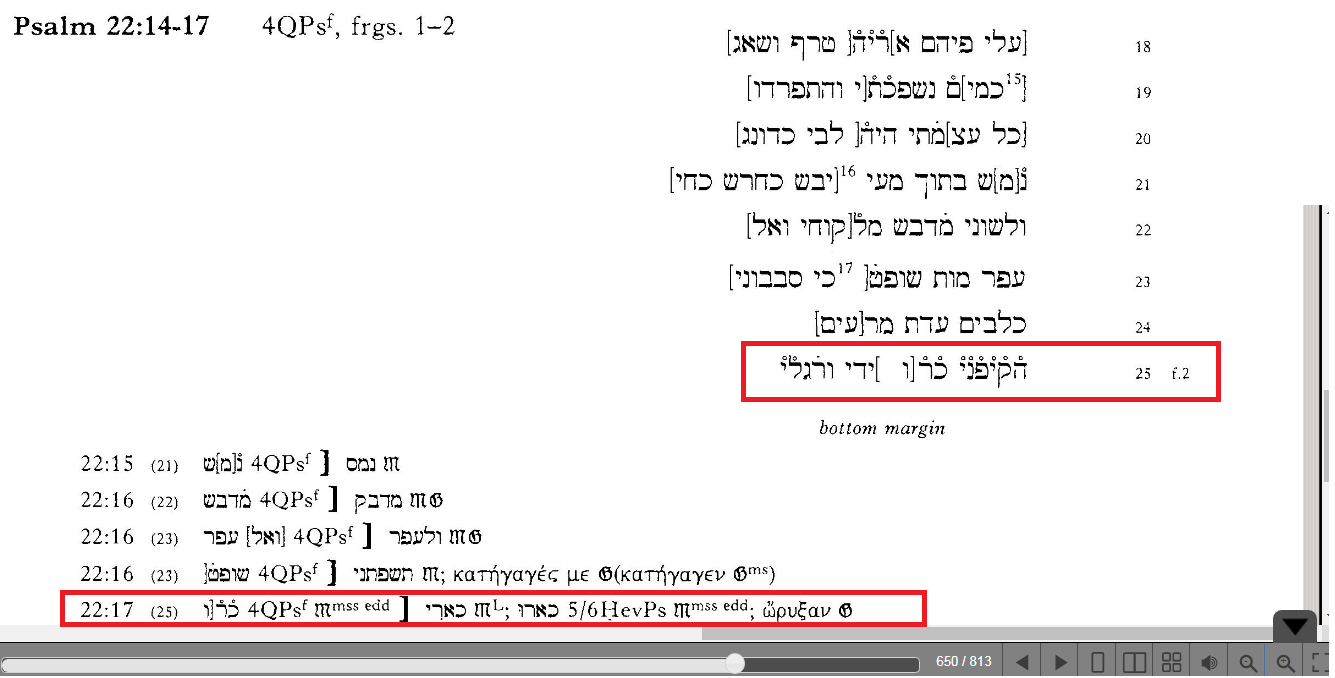 As this link does

The image from ulrich suggests it's in 4QPsf (which is aka 4Q88), fragments 1 and 2 (as does the torahresource dot com link that references him)

I see this link that shows manuscript fragments

But as fragments don't have verse numbers I can't find it, whether it's there or not, or how much of v16 is there.

That might even suggest it's specifically fragment two, as it says f2, but I can't see what is what.

I understand that dots above the letters mean that the letters are unclear in the manuscript, but I can't determine where the unclear letters i'm looking for are. For the scroll of isaiah the .org.il site have some digital effects where you hover over a scroll and it shows chapter and verse, but they haven't done it for psalms.

They let you zoom in on it on that website, it shows two images for fragment 2.

But as for where on that fragment the verse is or if it's on a different qumran fragment, I don't know?

I notice this is actually a very big subject if there are many fragments involved. 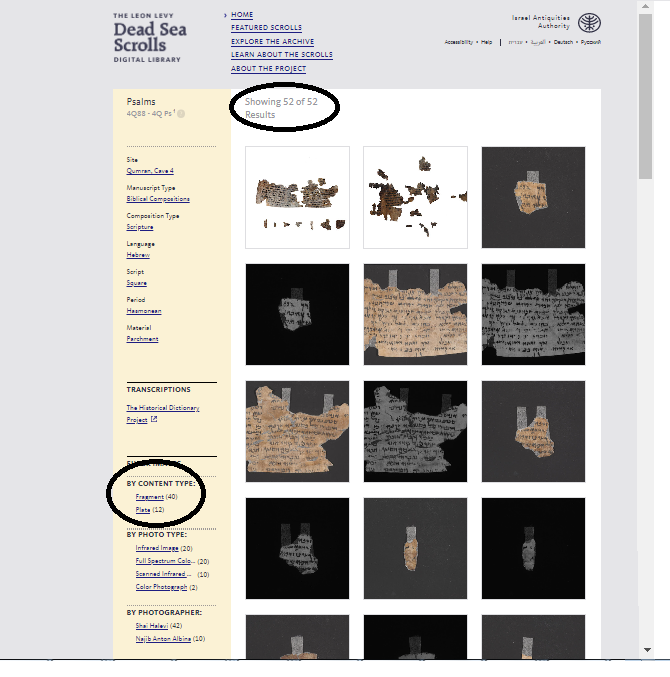 DSS English website shows that it has a few verses from Psalm 22, and quite a bit from Psalms 107 and 109

And the main ones are two of the fragments on Plate 436 fragments 2 and 3 look like the biggest on that plate. 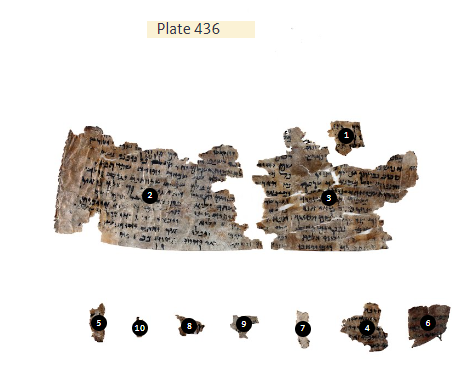 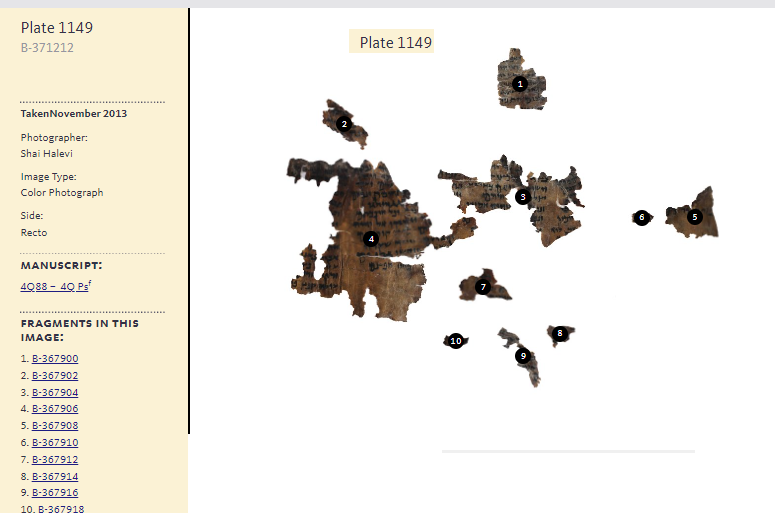 The remaining 10 images are just showing lots of plates and cover things other than psalms 22, in addition to psalm 22. 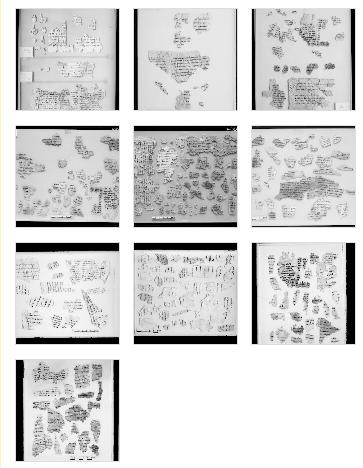 Ulrich doesn't mention which plate he used re when he says fragments 1 and 2, maybe Plate 1149 (since an answer mentions plate 1149 and highlighted something possibly of the verse on it). Maybe the other fragments don't have Psalms 22:17. 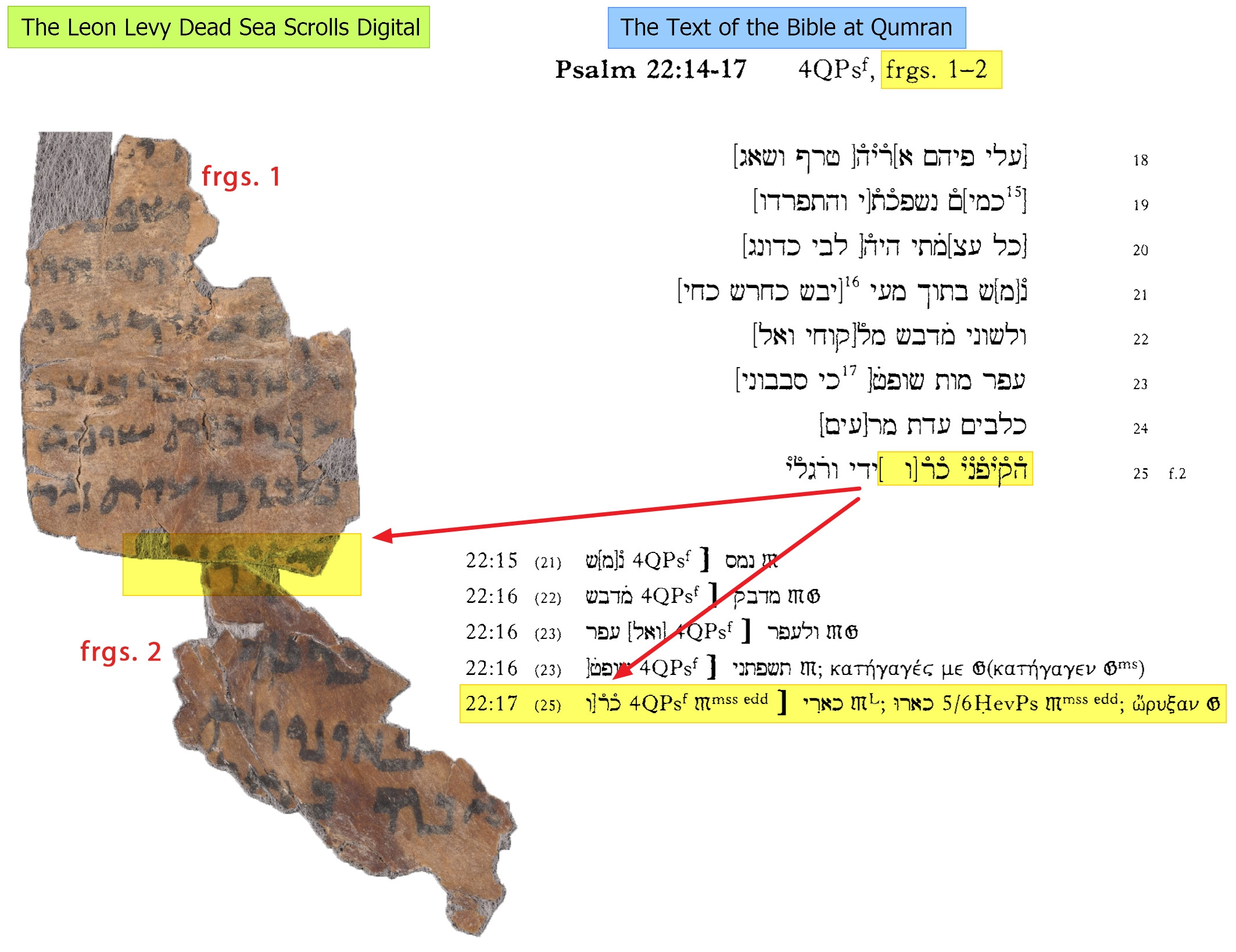 The book has added many letters that are not on the fragment, and made determination on other smudges and partial letters that could be any number of other letters. In short, and to be brutally honest, I don’t see how the editor of the scrolls made the determination that this is of Psalm 22:17

If I understand the OP question correctly, this is not what the site shows. The verse is shown in italics. A sidebar explains:

"Words in italics cannot be seen in the scroll, since the scroll is fragmentary. These words are supplied for readability by the World English Bible translation."

1
Has Psalms 22:16 been deliberately mistranslated?